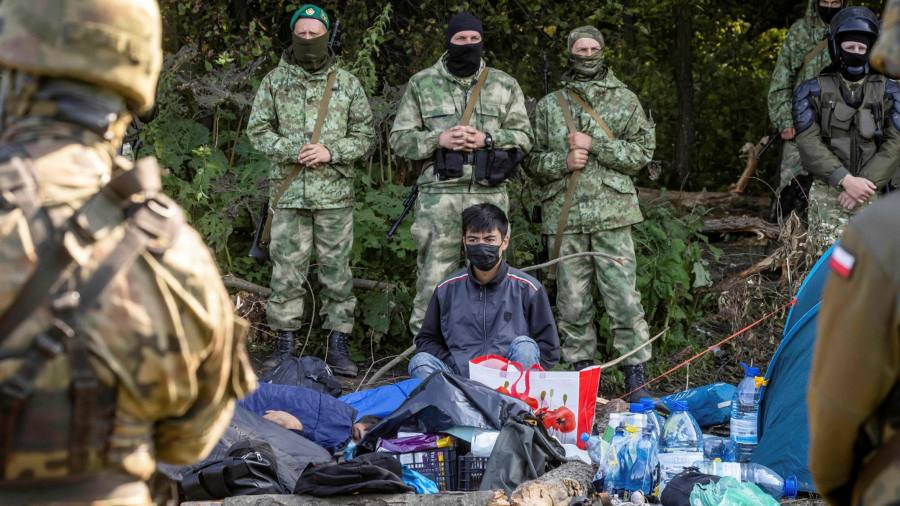 No dictator clings to power for a quarter-century without displaying plenty of cunning. Alexander Lukashenko of Belarus has found a way to hit the EU in a sensitive spot, part of his fightback against sanctions the bloc imposed over his crackdown on opposition after disputed elections last year. EU ministers last week accused the Minsk strongman of “instrumentalising human beings” and of mounting a “direct attack” aimed at destabilising the bloc — by deliberately funnelling Middle Eastern migrants across its borders into EU neighbours.

So far this year more than 4,100 asylum-seekers, mostly from Iraq, have illegally crossed from Belarus into Lithuania, 50 times as many as in all of 2020. Neighbours have accused Minsk of offering migrants from Iraq, Syria or North African countries packages to Belarus including passage to the border; Lithuania has released video footage said to show Belarusian riot police pushing migrants across the frontier. When flows into Lithuania waned recently as it strengthened its borders, they increased into Poland. Warsaw says it has detained more illegal migrants in August than in all of January to July.

Latvia, which also borders Belarus, has declared a state of emergency on the frontier, allowing the army to support border guards, and Poland last week sent more than 900 troops to its border with Belarus. Latvia’s foreign minister has warned of the risk of incidents, with Russian and Belarusian troops taking part in military exercises near Nato borders next month.

Lukashenko is probing one of the EU’s most neuralgic points. The 2015 migrant wave from Syria and elsewhere opened deep rifts and boosted nationalist parties. Poland, Hungary and the Czech Republic were later found to have broken EU law by refusing to accept “quotas” of asylum-seekers. The Taliban’s takeover of Afghanistan has provoked fears of a new wave of asylum-seekers, which could bolster populists in elections in Germany, France and elsewhere.

The Belarusian leader has said the country is responding to foreign pressure “according to its capabilities”. He told an eight-hour press conference this month that western sanctions would backfire, as “shown by the reality of today’s events” on the borders.

His actions pose a dilemma for EU leaders. They have relied on sanctions against officials and businesses as their main means of penalising the Lukashenko regime for a crackdown since post-election protests last year. Thousands of people have been detained.

There are ways Brussels can respond, however. One is by providing assistance to secure and monitor EU borders with Belarus, and to build reception centres where any migrants who do make it across can be processed.

Secondly, the only realistic way migrants can make their first entry into the EU from Belarus is to fly there. EU pressure has already persuaded Iraq to pause flights, for now, to Belarus. Brussels will need to engage similarly with countries from which, say, Afghan migrants might be flown to Minsk. Officials as well as scheduled airlines, charter companies and aircraft leasing businesses should be warned they will face penalties if they engage in such activities.

Lukashenko will surely have other tricks up his sleeve. He has already threatened to allow drugs and nuclear materials to flow into the EU — though tighter border controls could also help here. EU member states may struggle again to preserve unity if they face an influx of migrants fleeing oppression in Afghanistan. But they should not allow themselves to be manipulated by a man who is oppressing his own people in the heart of Europe.