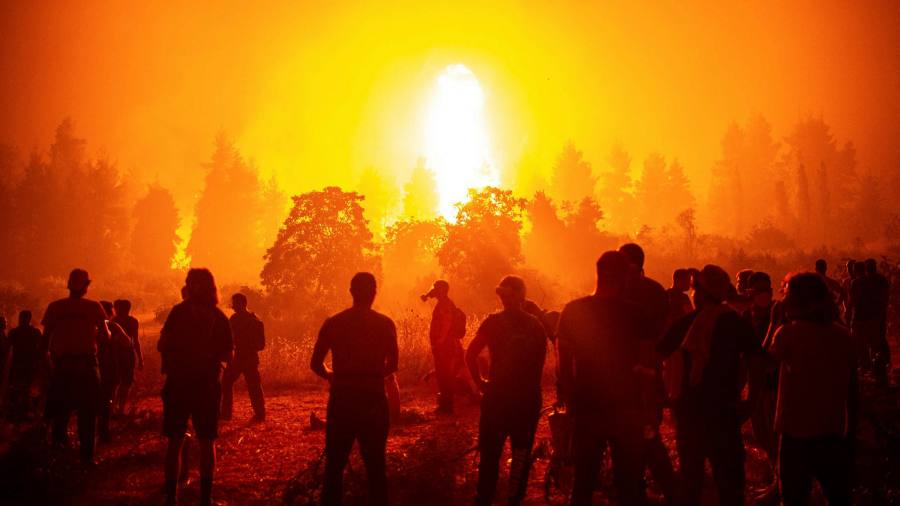 Much has been made of this week’s release of the UN’s Intergovernmental Panel on Climate Change report, as well as the more Wagnerian interpretations of its central findings.

Yes, we face the prospect of higher surface temperatures and it may well be Twilight of the Gods for fossil producers and users depending on how you view the “high and low confidence” scenarios in the report.

However, it is a bright morning for the climate modelling trade. Consultants who were rushing from one intermittent contract to another now have the prospect for billionaire partnerships.

For years, climate modellers have been condescended to by the “catastrophe risk” experts. The cat risk people have made a good living developing models for insurers and reinsurers that generated odds on losses from “perils” such as tropical storms, floods or earthquakes.

The insurers and their reinsurers wanted high resolution projections on regional risks to people with money. Not just for internal budgeting, but also something mildly scary to justify the premiums and their reviews by regulators.

The cat risk models from companies such as RMS, AIR or Karen Clark & Co took a one- to three-year view, close to the terms of insurance contracts. When their products’ estimates did not work, they tweaked the models, added assumptions and data, and started over.

The cat risk people have always been aware of the climate modellers’ efforts but tended to sneer at the profession and its work. They thought the climateers were commercially useless, obsessive, sometimes libellous and frequently lapel-grabbing lunatics. Also broke, so screw ’em.

Mind you, they could be a bit harsh on each other as well. A few years go, Karen Clark, a leading cat risk expert, was quoted as saying that her colleagues’ models were “Doing brain surgery with a chain saw”.

Leaving aside the faculty lounge-worthy brutality, you could see where the cat risk people were coming from. They were ginning up models with 10-metre to 100-metre resolution of activity on the earth’s surface, while the “cells” in the climate models might be 100km or 200km at the equator. Also, climate modellers would use simplifying assumptions to project multi-decadal or century-long scenarios. That would be long after the reinsurance contracts were settled (unless there was a Florida lawyer on the other side).

But now the climateers and cat risk peoples’ knives have been put aside in the interest of a greater cause. There is real money to be made at last in joining forces.

To begin with, while the cat riskers got the early cash from the insurers, the climateers have won the PR crown. So the cat riskers have partly rebranded themselves as “climate” experts. Moody’s announced on August 5 the acquisition of RMS, a cat model house now described as the “leader in climate and natural disaster risk”. Moody’s agreed to pay $2bn when the deal closes. The press release disclosed the previously private recent results of RMS, which has projected revenues of $320m for the year ending September 30, with $55m in operating income.

RMS had long been a bit more “climatey” than its fellow cat riskers, seeking more business from those, such as governments, looking further out at the risk horizon. Robert Muir-Wood, its chief scientist, was a co-author of the 2007 IPCC report. He says of the deal: “So you are marrying climate modelling with (cat risk) loss modelling. There is increased convergence since the available computation power has increased.”

OK, $2bn? Vinoth Jayakumar, of Draper Esprit, a London venture capital firm, will raise you and see you. Back in April, announcing a fundraising for Cervest, he wrote that “climate intelligence is a new $40bn market category”.

For example, say the Securities and Exchange Commission pushes ahead with plans to mandate climate disclosures for securities issuers, how do all those US companies find the computation time and data storage to do the modelling to comply? They might try to buy in climate modellers’ services but that is assuming they are available. Some who look at the present conservative composition of the US Supreme Court might not, seeing an opportunity for legal challenge.

As Muir Wood points out: “Regulation is likely to put a lot of demands on organisations to anticipate future risks. We recognise the scale of computation is increasing and so more and more will be run in the cloud.”

Video: Climate change explained: what can ordinary people do?