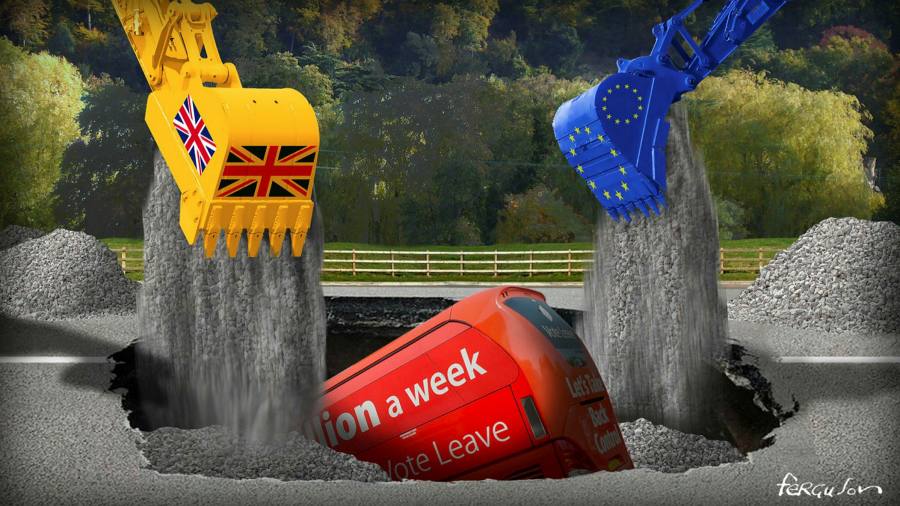 For the first time in the five years since the Brexit referendum, acrimony in the relationship between the EU and the UK shows tentative signs of thawing. Rhetorical hostilities are as fierce as ever of course, but actions speak louder than words and on the ground both sides are quietly moving into damage limitation mode.

Minimising further economic harm will never eliminate the damage already done. The depreciation of sterling after the vote to leave left people in the UK paying more for imports and reducing living standards by 2.9 per cent, according to a new paper in the International Economic Review. The imposition of controls and checks on goods at the UK border is lowering trade with the EU, just as economists warned.

With trade figures heavily distorted by coronavirus and Brexit itself, it is best not to be overly influenced by a single statistic, such as the UK ceasing to be one of Germany’s top 10 trading partners. Instead, the longer-term trends highlighted in UK data show a steady and pronounced drop in UK exports to the EU compared with three years ago, with imports from the continent falling even faster. So long as we make the trivial assumption that the trade was valuable for producers and consumers alike, throwing sand into its cogs has hurt both sides’ economies and living standards. The vast majority of the pain, of course, is felt in the UK because business with the EU is much more important for Britain than vice versa.

From London, it is easy to blame many current ills on Brexit. Shortages of lorry drivers, care home workers and hospitality staff are rooted in many more issues than Brexit alone, but it is impossible to deny that new restrictions on movement of people and goods from the EU have exacerbated them.

These outcomes were the direct result of implementing the referendum result and, as such, probably unavoidable. The rapid introduction of unnecessary additional restrictions would compound the economic harm. For the time being, Boris Johnson’s government appears to understand this and on Tuesday demonstrated a welcome willingness to go slow on implementing the full border controls that come as part of his deal with the EU.

Follow the big issues arising from the UK’s separation from the EU. Get Brexit Briefing in your in-box every Thursday. Sign up here.

During Brexit negotiations, the prime minister predicted that the EU would not impose frictions at the border because German carmakers and Italian prosecco producers would insist on the UK having full access to the EU single market. But given the unequal trading power between the two sides, long after the EU imposed the controls on UK exports, it is London that is hanging back on imposing equivalent measures at the border. This government fears the public’s response if the imports people love are made more costly and difficult to buy.

London first pushed back the imposition of border checks six months ago and has now delayed implementation of full border controls again until summer 2022. It seems that the best way to improve lives in the UK, according to the government, is not to take back control.

Goods imports is not the only area where damage limitation is now Brexit policy. UK ministers have allowed businesses to use the EU’s “CE” safety mark to show products meet safety standards for another year, rather than insisting on a new “UKCA” quality and safety certification, avoiding pointless duplication on product standard certification.

The longer these easements remain in place, the better off British businesses and consumers will be. With its delays, the government is belatedly recognising the economic reality of Brexit and — wisely — is holding back.

Importantly, this is not all one-sided. Damage limitation appears to be motivating the European Commission’s latest action to calm tensions in Northern Ireland. This month it merely “took note” of the UK government’s unilateral decision to extend “indefinitely” the temporary grace period in the Brexit trade agreement allowing chilled uncooked sausages and similar foods access from Great Britain into Northern Ireland.

So long as there remains scant evidence of a sizeable back door for goods to get into Europe’s single market across Ireland’s open and uncontrolled land border, the EU’s calm reaction to the UK’s failure to impose the Northern Ireland Protocol was judicious and in its own interests. No longer does Brussels need to demonstrate to other member states that leaving the EU comes with hefty costs.

The on-the-ground truce is an unstable equilibrium. Yet the longer it lasts, the greater is the chance temporary easements remain without ever being permanent. The last thing anyone needs now is another highly public negotiation. Temporary regimes that last for decades have been a hallmark of the EU’s history and the more that Brexit can become part of this tradition, the better life will be on both sides of the Channel.

Brexit is now largely a sunk cost. It has given its proponents in London the levers of power they sought. But with power comes some responsibility and you cannot keep making lives worse with a purist notion of Brexit without people noticing. Johnson and the EU are fully entitled to shout about the minor benefits that Brexit brings both sides, but they would be wise to quietly continue with damage limitation on the big stuff.

The FT has revamped Trade Secrets, its must-read daily briefing on the changing face of international trade and globalisation.

Sign up here to understand which countries, companies and technologies are shaping the new global economy.