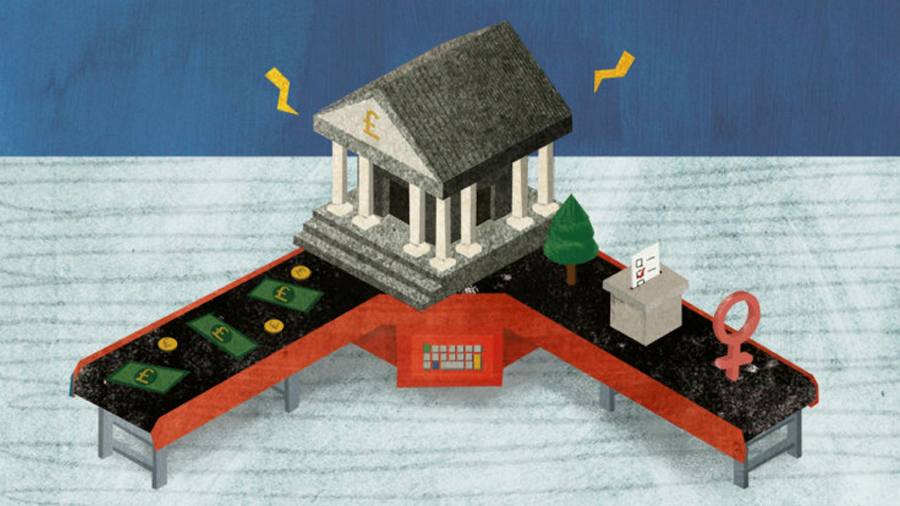 What’s the point of a central bank? The old fashioned among you will think the answer to that is obvious: to manage interest rates and the supply of money such that inflation remains firmly under control. Central bankers have different ideas. Where they once liked to consider themselves technocratic, they now think of themselves as rather more nuanced — able to “look through” inflation rather than being wedded to metric-driven interest rate rises.

And where they once figured that they had just the one job, they now seem to feel the world needs their input on pretty much everything. Former Bank of England Governor Mervyn King recently complained about central banks “moving into the political arena”, and with good reason. Data from the Bank for International Settlements show that references to “inequality” have risen sharply in central banker speeches, while the chief executive of the Reserve Bank of Atlanta (among others) called for central banks to “play an important role in helping to reduce racial inequities and bring about a more inclusive economy”.

You can also be sure that climate change will get a mention within the first few minutes of every speech at the central bankers’ (now virtual) meeting at Jackson Hole. At first glance this might seem to make perfect sense. The European Central Bank’s Christine Lagarde explains it in terms of the fable of the mice, the cat and the bell: all the mice agree that life would be better for all if the cat wore a bell — but no one wants to be the one who actually creeps up and attaches the bell.

To want to help with the bell placing is not mission creep, she says, but “acknowledging reality”. You can also argue that it fits perfectly within the traditional brief of most central banks: if, say, climate change could in the medium term be both a nasty driver of inflation and a challenge to long-term financial stability, why shouldn’t central banks have a go at helping out? Most other central banks agree: the Bank of England has climate change down as a “strategic priority”.

There are a good few reasons why this is a mistake. The first is that most of these things are none of their business. Central banks have huge power — but as their leaders are unelected it is vital that that power remains as contained as possible. Look at what has already happened over the past decade as central banks have blended monetary and fiscal policy, first by using quantitative easing to finance anything governments fancy, and second by turning a blind eye to the asset market bubbles and fast-rising wealth inequality that their insanely loose monetary policy has created.

There’s a reason the wealth of the world’s billionaires has soared during the pandemic — and it is more likely to be the $120bn of bonds the Federal Reserve has bought every month than fast global GDP growth (the S&P 500 is up 21 per cent so far this year alone). The inequality that the world’s central banks are so worried about? They might have caused much of it. In that sense they have been dabbling in politics for a long time already. Just not in a good way.

The second is that once you start mission creep (for that is what it is) where does it end? It is possible that climate change might cause inflation. But so can a shortage of HGV drivers (currently causing supply havoc in the UK) — and thus far no one has suggested the Bank of England have policies to speed up the training of lorry drivers. These are jobs for other organisations.

However the most obvious reason is that central banks have more than enough to do just covering their basic brief. The developed world is in as hideous a monetary policy trap as it is possible to imagine. Low rates are causing asset price bubbles all over the place (from housing to NFTs); ordinary people have no hope of getting a real return on their cash; inflation is confusing and potentially frightening; and the rise of cryptocurrencies is threatening central bank control over transactions and deposits.

Just trying to figure out if inflation is transitory — or not — would be enough work for most institutions. And that’s before you see the way clear to back out of the monetary policy of the last decade. Once you’ve let markets bubble, how on earth do you unbubble them?

Now try doing that, all the other things mentioned above, and worrying about politics. You might soon find you can’t see the macro for the micro. How for example would you square raising interest rates sharply into fast rising inflation, with protecting minority groups who have high levels of debt or low levels of employment? And how do you keep inflation expectations anchored if everyone knows you have that conflict? That’s not a job description most people would write themselves — particularly given that the last bout of nasty inflation happened in the 1970s (when central banks were explicitly not independent of politics).

Mission creep is a common problem. It might be time for national politicians to start insisting that political issues are left to them and that everyone else just gets on with their own jobs. Local councils could fix the roads really quickly. Companies could make, sell and deliver stuff. And central banks could use monetary tools to have a go at controlling inflation. Much easier all round.