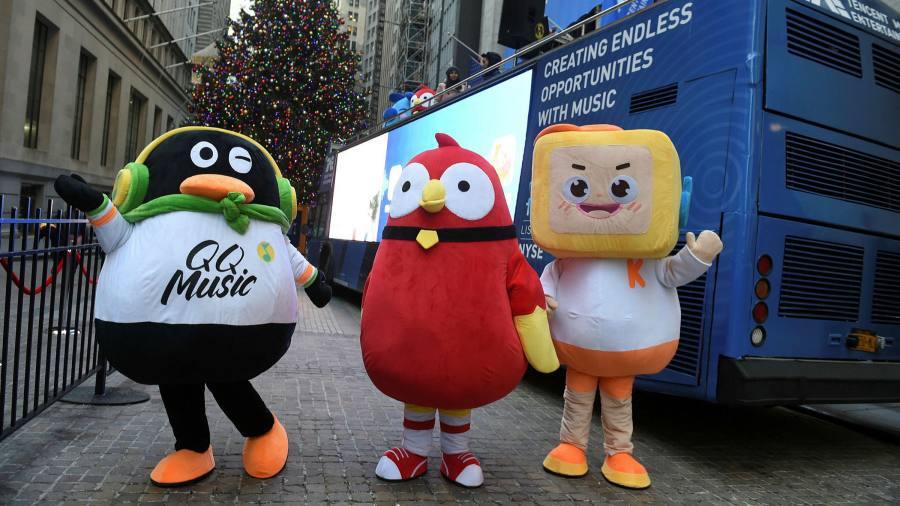 Sign up to myFT Daily Digest to be the first to know about Tencent Holdings Ltd news.

Tech groups in China repeatedly hear one sound these days: the crack of Beijing’s whip. Ears ring most in the lucrative music streaming industry. Market leader Tencent Music, controlled by Tencent Holdings, will suffer most from the intensifying regulatory scrutiny.

China’s biggest music streaming company was fined last month for unfair market practices and ordered to give up exclusive music licensing rights. It has about a week left to comply.

Tencent Music must find a new business model. It holds more than 80 per cent of the country’s exclusive music content, which backed its rapid growth. Revenues reached $4.5bn last year. Operating margins of 14 per cent at the end of March compare favourably with Spotify’s losses. The latter holds 8 per cent of Tencent Music’s ordinary shares.

Even more discordantly, once exclusive contracts end this month, Tencent Music cannot enter into new exclusive agreements. Nor can it accept preferential pricing or contract terms that copyright owners offer.

Tencent Music has hedged its bets through other income sources, such as live streaming and online karaoke platforms. Those segments, including revenue from users tipping their favourite karaoke singer, accounted for 72 per cent of sales last year. Unfortunately, both areas have also come under regulatory scrutiny.

But for smaller rivals, having Tencent out of earshot does not automatically mean fatter profits. With the barriers lowered, new entrants can too bid up prices for the latest hits.

Tencent Music’s share price has dropped two-thirds in the past six months. At 25 times forward earnings, it trades in line with satellite radio company SiriusXM. That still looks pricey considering the questionable sustainability of the Chinese streaming business model.

Investors have tuned out of another mess. Cloud Village, Tencent’s biggest rival, postponed plans to raise about $1bn in a Hong Kong listing this week. This lossmaking unit of Chinese gaming giant NetEase has a similar business model as Tencent Music. When Cloud Village fails to come to market, expect potential buyers to sound out an adjusted valuation, reflecting Beijing’s stricter regime.