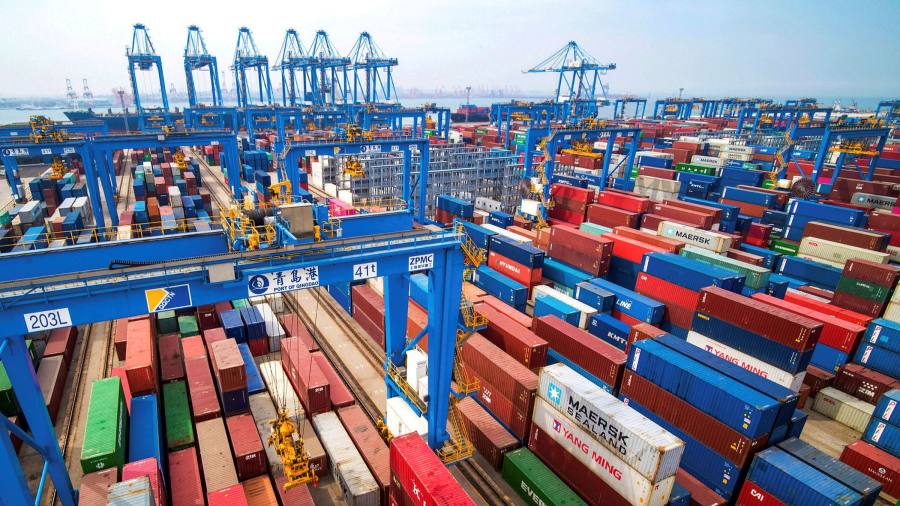 China reported the largest monthly trade surplus in its history last Friday. At $94.5bn, this was the latest in nearly two years of record monthly surpluses even as Chinese consumption has stagnated.

But while it may seem sheer good luck for China that its soaring trade surpluses came just in time to balance stagnant consumption, this misunderstands the relationship between domestic consumption and trade. Contrary to what many assume, the country’s burgeoning trade surplus is not a symptom of manufacturing prowess, nor is it evidence of a culture of thrift. It is instead a consequence of the great difficulty China has had in rebalancing its domestic economy and reining in its soaring debt.

This is because the very conditions that explain stagnant domestic consumption also explain the rapid growth in Chinese exports relative to imports. This is true, by the way, not just of China but of all countries that run persistent trade surpluses. Whether they are high-wage economies, such as Germany and Japan, or lower-wage ones, like China and Vietnam, their international competitiveness is based mainly on the low wages their workers receive relative to productivity.

But it is precisely the low wages relative to productivity that limit the ability of their households to consume a substantial share of what they produce. In all of these countries, households receive a lower share of gross domestic product than among their trading partners, which is why they also consume a lower share.

This isn’t always a bad thing. In the 1980s, suppressing consumption allowed Beijing to direct huge amounts of newly-produced resources into much-needed investment. The result was rapid, sustainable growth as China built the infrastructure and manufacturing capacity it urgently needed.

This, however, changed around 10-15 years ago, once China had begun to invest as much in property development and infrastructure as it could productively absorb. That is when the debt used to fund investment rose more quickly than the economic benefits of that investment, eventually leaving the country with among the fastest growing debt burdens in history.

Beijing has known the solution to this problem for years. In order to control soaring debt and the non-productive investment it funds, it had to rebalance the distribution of income by enough that growth would be driven mainly by rising consumption, as is the case in most other economies. But this requires a politically-difficult restructuring of the economy in which a larger share of total income — as much as 10-15 percentage points of GDP — is transferred from local governments to Chinese households.

This is why the trade surplus matters. In recent years, Beijing has tried to slow the growth in debt by reducing non-productive investment in property and infrastructure. This year, as we saw with Evergrande, Beijing came down hard on the property sector.

If a rising share of China’s total income had been going to ordinary households, the resulting reduction in investment by property developers could have been balanced by a rise in consumption. But that’s not what’s happened. In the past two years, partly as a consequence of the Covid pandemic, growth in wages has actually lagged behind growth in GDP. The share Chinese workers have received of what they produce has declined rather than increased, and with it so has the share they are able to consume.

This is why China’s monthly trade surpluses have nearly doubled in the past two years. Larger trade surpluses, driven by a declining household share of GDP, allow Chinese manufacturers to absorb weaker domestic demand without reducing output. Without these surpluses, Beijing would have to allow debt to rise even faster if it didn’t want factories to fire workers.

Rising exports are usually a good thing, but for countries like China, rising trade surpluses are not. In this case they are symptoms of deep and persistent imbalances in the domestic distribution of income. Until the country is able to reverse these imbalances, something which has proven politically very difficult, these large surpluses are just the obverse of attempts by Beijing to control debt, and so they will persist.

This matters greatly to a world wrestling with weak demand. For China to run surpluses of nearly 5 per cent of its GDP, the rest of the world must run deficits equal to an astonishing 1 per cent of its collective GDP. As Beijing struggles with its burgeoning debt and the difficulty of rebalancing domestic income, the rest of the world will have to continue absorbing China’s burgeoning trade surpluses.