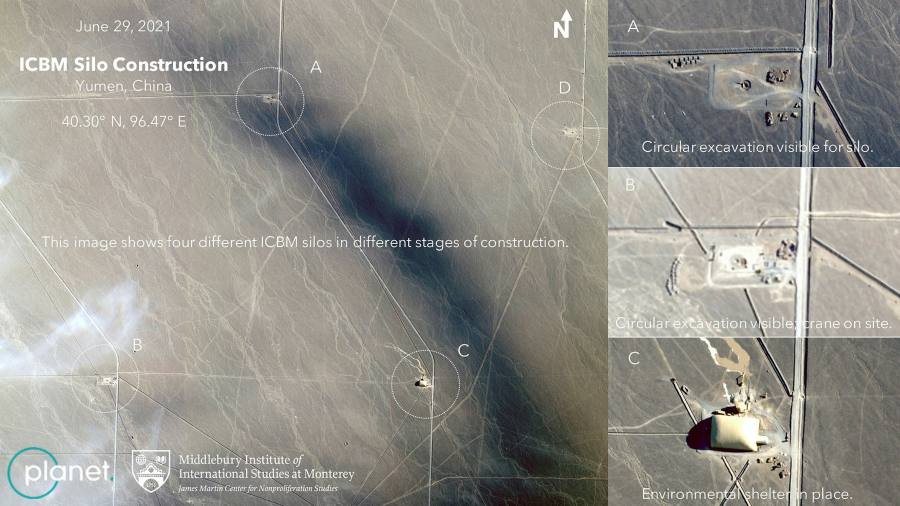 Nothing says “cold war” more emphatically than an accelerated build-up of nuclear arsenals. So recent revelations that China is building two new missile silo fields in its western deserts are cause for deep concern. Matt Korda and Hans Kristensen, the nuclear arms experts who revealed the second field, called the efforts the “most significant expansion of the Chinese nuclear arsenal ever”. They estimated that China is building 10 times as many silos for intercontinental ballistic missiles as it has in operation now.

Beijing is also walking back from a nuclear doctrine based on “minimum deterrence”. This meant that China would restrict itself to the capability to retaliate against an attack and would not use nuclear weapons first. Now experts say it is shifting to a “launch on warning” posture that would enable it to launch a counterstrike as soon as it knew an attack against it was under way, rather than after missiles had hit.

China remains a relative nuclear minnow; the Stockholm International Peace Research Institute estimates it has 350 warheads, a fraction of the US total of 5,550 or Russia’s 6,255. As an established nuclear weapons state, it is not explicitly prohibited by the Non-Proliferation Treaty from modernising or expanding its arsenal, even if signatories are supposed to be committed to disarmament. The US has limited leverage to urge it to halt the build-up. China’s expansion is also motivated, in part, by worries that US missile defence makes its small arsenal less effective.

Its build-up is a blow, however, to global non-proliferation hopes, and disturbing amid the erosion of the arms control architecture Washington and Moscow created in the cold war. The west needs to deepen preparations to contend with a Chinese military assertiveness animated by its territorial claims over Taiwan, in the South China Sea and elsewhere — and backed by a bigger nuclear capability.

Showcasing China’s most advanced intercontinental ballistic missile, the DF-41, at a national day parade in 2019, Beijing warned that China will not tolerate “nuclear blackmail”. The DF-41 is capable of hitting targets with multiple warheads all over the US.

The last century holds lessons for would-be cold warriors. Building up a nuclear arsenal is not only expensive. It can lead to an arms race that generates so much fear and mistrust that it renders other forms of co-operation untenable. The 1962 Cuban Missile Crisis also showed the risks of miscalculation. The scope for misadventure between US and Chinese militaries is similarly great; one reported close call in April involved China warning off a US guided-missile destroyer which was surveilling a Chinese aircraft carrier.

That makes it essential for the US and China to improve military communication. The two sides do already talk from time to time, but need a structured programme of engagement aimed at understanding each other’s aims and posture. China ought to agree to US requests to set up a military-to-military hotline, and to meetings between the US defence secretary and China’s top brass. There will be topics, such as strategy towards Taiwan, too sensitive to discuss. This should not deter engagement on other issues.

It is also vital for China to be brought into US-Russian arms talks. Beijing has resisted such efforts, wary of submitting its limited stockpile to verification measures. The US under Joe Biden has recently sought to relaunch arms control with Moscow, extending the New Start treaty. It should press Russia to challenge China — with which Moscow has just engaged in joint military exercises — to join. The two-sided arms race of the last century was terrifying enough. A three-sided one would be worse.