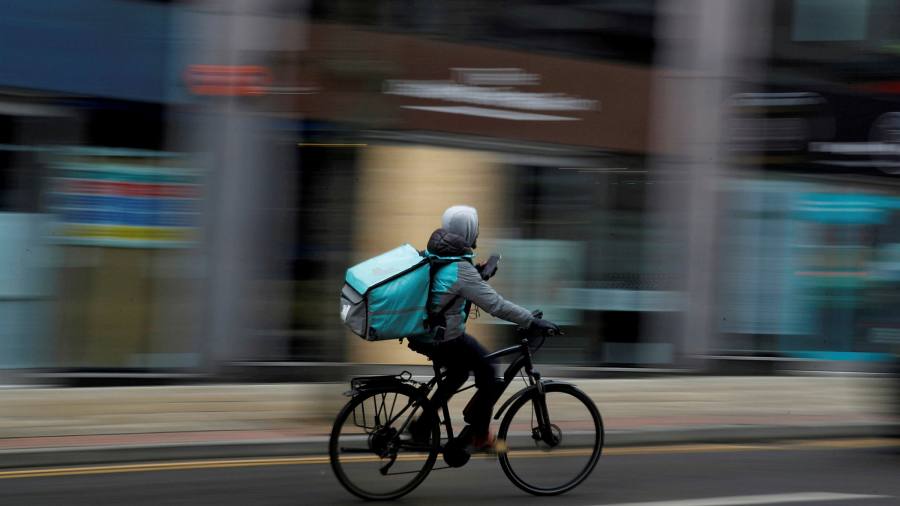 Sign up to myFT Daily Digest to be the first to know about Roofoods Ltd news.

Unfriendly institutional investors knocked Deliveroo off its bike when it entered the London stock market in March. The food delivery company has had a smoother ride since then. On Tuesday, it declared that first-half growth was materially ahead of expectations. Yet Deliveroo remains in a precarious position.

Three factors have helped push the share price back towards the listing price: strong trading, a legal victory and stakebuilding by a German rival. A June Appeal Court ruling that riders are self-employed removed a sizeable headache in the UK, though Deliveroo will pull out of Spain, where a new law requires them to be hired as staff. Interim results ease worries about the end of the pandemic takeaway boom.

News that German rival Delivery Hero has built up a 5 per cent stake is another fillip. It offers a vote of confidence from boss Niklas Ostberg, who told his Twitter followers that Deliveroo had been oversold. Delivery Hero’s stake could lead to something more. Ostberg has previously noted that the only way to enter the UK market would be through an acquisition.

A hostile bid is not an option. Deliveroo boss Will Shu has dual-class shares that allow him to block any deal for three years. But Deliveroo will struggle to make it as a standalone company given the size of its rivals.

Delivery Hero has more than four times the market value of Deliveroo in euro terms. Its enterprise value is nearly six times its forward sales, almost twice that of Deliveroo. Plus the German group provides very strong competition. In three-quarters of its markets it has leading share. Out of a dozen markets Deliveroo wins only in France, according to Bernstein analysts.

Small delivery groups struggle to reap the benefits of scale and to ease up on marketing spending. Deliveroo’s margin on its gross transactions, minus cost of sales, has declined by 1 percentage point in the past year to 7.8 per cent as it ramps up investment in growth. Margins could dip further in the full year amid increased investment. Average order values may fall back to pre-pandemic levels.

The intensity of competition in the food delivery business means no let-up in the costs of acquiring and keeping customers. For a weak player in a tough market, a deal with a larger rival should at least be on the menu.