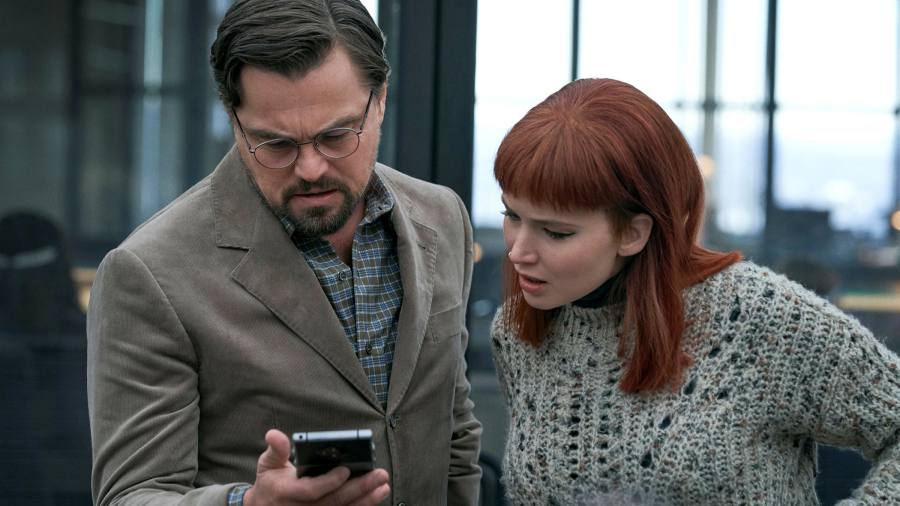 It is an all too familiar story of this age: an expert pronounces, the people react. Mostly it is with respect. But for those who don’t like the conclusion, the resistance hardens. They seek out an alternative truth.

Depending on where you fall on the spectrum, pick your issue: Covid vaccinations, climate change, Brexit, maybe even the Moon landings. But in this instance, it is that Netflix comedy about a comet hitting the Earth, Don’t Look Up.

This film is taking an unusual trajectory. The experts here are some of the newspaper critics who gave it tepid write-ups. Within days, there were passionate counter-reviews on Twitter and it had spawned its own corner on the piazza of modern discourse, Reddit. Its failure at the hands of the critics has made it a success — and one I’m not sure entirely to be wished for.

Susan Sarandon, climate scientist Michael Mann and Joyce Carol Oates have all said their piece in support on Twitter

How could the film, which has been airing on Netflix since Christmas Eve, not be a winner? It has a cast including Leonardo DiCaprio and Jennifer Lawrence as astronomers, Meryl Streep playing a Trump-like president, Ariana Grande as a bandwagon-jumping celebrity, Mark Rylance as a rocket-launching tech billionaire, and a deliciously dark pitch: it isn’t the impending comet or the obvious subtext, climate change, that’s the problem. It’s us. Faced with a planet-killer of an event, we have to pick holes in the argument.

And the critics did. The Washington Post called it “shaggy”. The Guardian likened it to a cringey political Facebook meme sent by an ancient relative. The FT’s Danny Leigh review had plenty of jokes of its own and the Daily Mail ran a favourite old story trope: “Leonardo DiCaprio hopes new film Don’t Look Up will be a ‘wake-up call’ about climate change (so will he finally give up private jets?)”.

Those write-ups became akin to those events to which conspiracy theorists say: “Who cares about the experts, I only believe what I see with my own eyes.” Or, as one Reddit commenter put it: “They don’t own how I perceive things. I would believe them only if they were scientists.”

In true contrarian style, alternative facts began to emerge. The old metric for a film was how many stars it was given — the lowest I’ve found for Don’t Look Up was two out of five by The Guardian.

Netflix has its own numbers, which you can’t measure against traditional box office either. It advertised that it had 263m “viewing hours” in its first two weeks of its release (not quite such an impressive stat when you consider the film is rather long at nearly two and half hours). It is in Netflix’s top 10 films in 94 countries, and is the platform’s third most successful movie ever.

The other means of turning public opinion are alternative commentators: actress Susan Sarandon, climate scientist Michael Mann and author Joyce Carol Oates have all said their piece in support on Twitter.

As well as contributing to Netflix’s viewing figures for Don’t Look Up, I found myself watching The Producers over Christmas. A flop initially, its first screenings in Philadelphia played to sparsely attended theatres — a bag lady was one of the notable few — and barely a laugh. When it arrived in New York, the eyes of steely film critic Renata Adler fell upon it. “Shoddy”, “gross”, “uneven”, she wrote.

But Peter Sellers had seen an early showing of the film by accident and did the 1968 equivalent of blue-tick tweeting. He took out full-page ads in Variety and the New York Times calling it “the ultimate film” and “a phenomenon”.

Failure was turned into success. The theatres began to fill up, the weaknesses turned into strengths and it became a landmark film in a renegotiation of our relationship with Hitler: ridicule triumphing over terror.

Don’t Look Up director Adam McKay would clearly like ridicule heaped upon politicians and media to inspire some terror about climate change.

The mediocre reviews have been weaponised to do this. Peppered through the critiques of them are accusations that the nexus of special interests are doing down the movie because they are being mocked. McKay accused those who have failed to grasp the severity of climate change and the importance of his film as being like a robot viewing a love story. “WHy ArE thEir FacEs so cLoSe ToGether?”

The problem, then, is who to listen to. The film-maker and platform who tell you their work is great? The quiet scientists grinding data or the noisy ones pumping out opinions, even on films? Experienced critics or the public? And if the only thing we can agree on is “not the politicians”, then who else is meant to change stuff?

For the record, I wasn’t a robot. I thought the film a disturbing dissection of the current state of play. So too, by the way, did most of the reviews, if you read them in full.