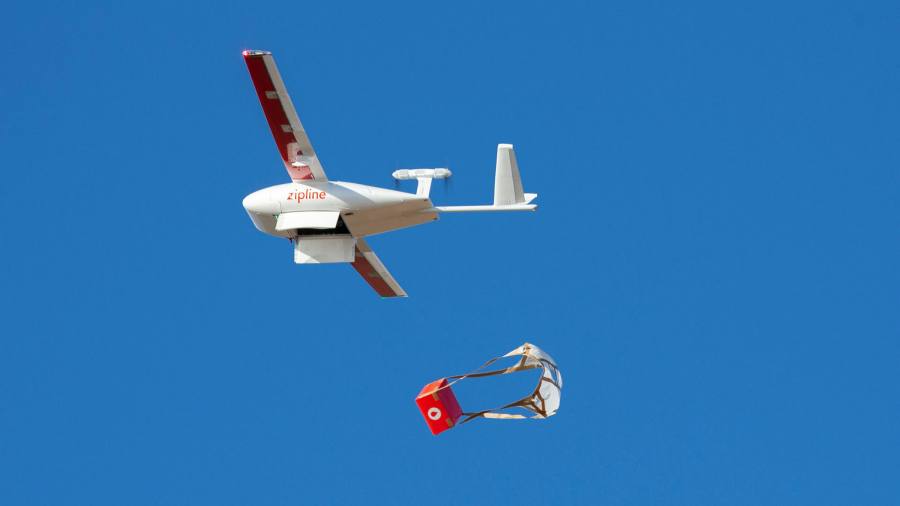 Sign up to myFT Daily Digest to be the first to know about Drones news.

Whoever coined the name “drone” for unmanned aerial vehicles must have skipped their marketing modules. Commercial applications for the technology, which is already used by the military, are growing rapidly. Transport and logistics are vying to become the biggest markets. There is little to quibble about the idea of fast, clean, congestion-reducing movement of goods and people. The downside is the noise.

Plans for drone delivery by ecommerce giant Amazon as part of its UK operation are stalling, according to news reports. Even so, mass deployment looms. UPS intends to use drones and larger electric aircraft for deliveries by 2024.

Specialist operators are lining up with logistics solutions. US company Zipline is already operating 1,000 drones and making parachute deliveries globally. A $250m funding round in June valued the group at nearly $3bn.

The prize is a market that might be worth $115bn in the US alone by 2035, evenly split between logistics and passenger transport, thinks Deloitte. Development of aircraft for the latter is ramping up. Numerous electric vertical take-off and landing (eVTOL) groups have taken advantage of the US Spac (special purpose acquisition company) boom to access finance, including Joby, Lilium and Vertical Aerospace.

With only prototypes available — and often unmanned ones at that — claims made by companies about the noise levels of eVTOLs are difficult to verify. Volocopter said its multicopter produces 65 decibels (dB) of noise when hovering at 75 metres. This is about the same as a car passing close by at 20 miles per hour. Joby recently demonstrated its eVTOL prototype producing 55dB at 100m.

Smaller, unmanned drones have been subject to greater noise testing. Multicopters weighing up to 5kg typically produce noise levels between 70dB and 85dB when flying one metre above the ground, according to an analysis by the Swiss Federal Laboratories for Materials Science and Technology. Heavier drones of up to 20kg produced noise closer to 90bB — four times louder than 70dB and similar to a conventional helicopter hovering at 500m. One further catch is the type of noise made. Droning sounds are more annoying than lower-frequency loud noises made by cars and vans, according to a study by Nasa. No wonder eVTOL hopefuls are quick to point to the sedate hum of their own machines. Still, a sky full of flying taxis and delivery drones suggests the future is going to be loud.