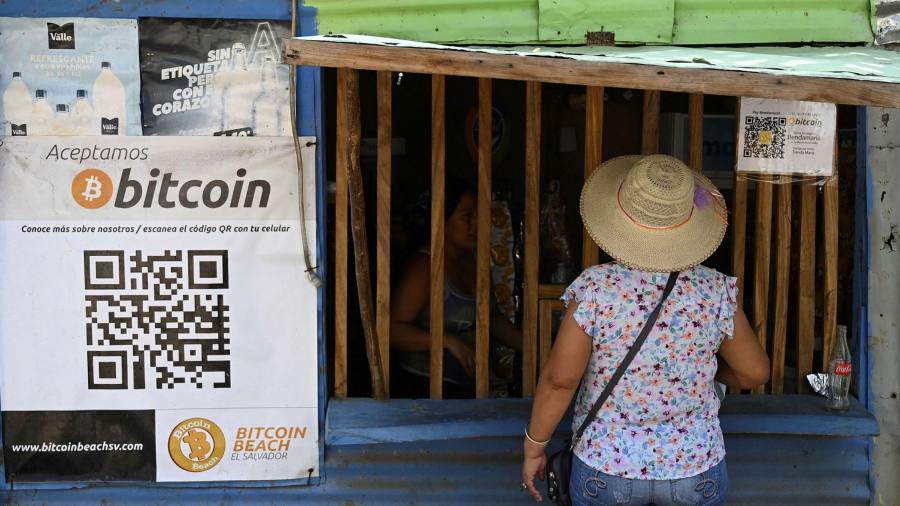 Sign up to myFT Daily Digest to be the first to know about Bitcoin news.

Is it cool to adopt cryptocurrency as legal tender? El Salvador thinks so. On Tuesday, the small Central American nation became the first in the world to adopt bitcoin as an official currency. Taxes may be paid in the cryptocurrency and merchants must accept it alongside the US dollar, the national currency since 2001, if they have the technology.

A network of cash dispensers will allow users to convert bitcoin into dollars free of commission, backed by a $150m government fund. Salvadorans will receive a free $30 in a digital wallet called Chivo — “cool” in local slang.

Nayib Bukele, El Salvador’s authoritarian president, thinks the move will promote foreign investment and make it cheaper for expatriate Salvadorans to send home billions of dollars of remittances. The haste of the project is remarkable. Bukele announced the plan in early June. Three days later, his supporters in Congress passed a brief law late at night allowing the adoption of bitcoin within 90 days.

Salvadorans are less happy. Opinion polls show a clear majority against the idea. This may reflect a fear of the unknown: fewer than 5 per cent understand bitcoin, according to one survey. But citizens also worry about taking payment in a currency whose value has varied between $10,000 and $63,000 over the past year.

The World Bank turned down a request to help advise El Salvador on bitcoin. Moody’s has downgraded the country’s debt further into junk territory. The yield on long-dated Salvadoran government debt jumped to almost 11 per cent last month as investors fretted about the move.

El Salvador’s move seems odd because the country suffers none of the currency turbulence cited by crypto fans as a reason for jettisoning fiat money. Quite the opposite: the central American nation has enjoyed low inflation and economic stability since adopting the US dollar 20 years ago.

Financial inclusion, an oft-touted bitcoin benefit, is surely better served by encouraging fintech neobanks. Their proliferation across Latin America is helping the unbanked access financial services and cutting the cost of money transfers, without any of the risks — or the pollution — generated by cryptocurrency.

Bukele’s critics suspect other motives. The 40-year-old leader’s hipsterish enthusiasm for bitcoin is a useful distraction from widely condemned recent moves to pack the supreme court and secure a judgment allowing him to run for a second consecutive term in 2024.

The bitcoin gambit might also be a stalking horse for a longer-term plan to replace the US dollar with a local stablecoin, a cryptocurrency whose value is backed by an external asset.

Whatever Bukele’s motives, it is hard to see the experiment ending well. El Salvador’s hasty adoption of bitcoin is fraught with risk and ordinary citizens are likely to pay a heavy price for their president’s gamble. This is not to oppose innovation: central bank digital currencies, for example, hold much promise if carefully implemented. But bitcoin is not cool as government-backed legal tender.