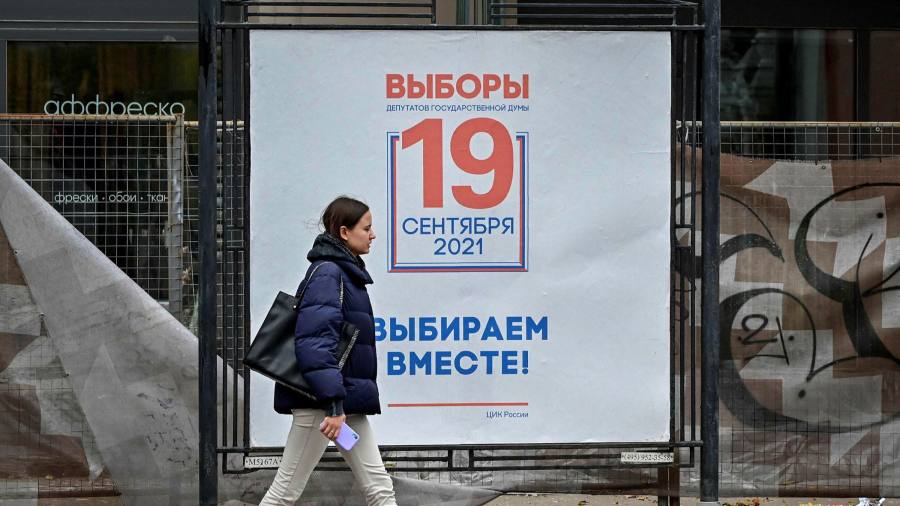 Your essential guide to what matters in Europe today. Delivered every weekday.

A couple of decades have passed since Vladimir Putin and the Kremlin’s political operatives honed their methods of ensuring Russian elections always deliver their desired outcome. Once again, despite flagging ratings, the pro-Putin United Russia party is expected to secure a majority in Russia’s lower house in elections on Sunday. Never before in the post-Soviet era, however, have the tactics been so heavy-handed. Putin’s “managed” democracy, which once relied on a modicum of subtlety, is becoming nakedly repressive.

The crackdown was signalled by last year’s poisoning of the anti-corruption blogger Alexei Navalny and, after he — inconveniently for the authorities — survived and returned to Moscow, his arrest and imprisonment. His network has been outlawed as “extremist”, bracketing it with Isis or al-Qaeda, and barring his supporters from elections or threatening them with jail. Independent media outlets have been named “foreign agents”, making it hard to survive. Dirty tricks have been used against opposition candidates.

The anti-Navalny offensive was motivated in part by his exposés of high-level corruption. It also aimed to snuff out the “smart voting” initiative Navalny had trialled in regional polls, encouraging voters to back whichever non Kremlin-aligned candidate has the best chance of winning.

Yet all this follows several years of feeble growth and stagnant living standards, in stark contrast to the early Putin years. Support for United Russia has dwindled. The president’s ratings remain higher. But polling shows many younger Russians oppose Putin standing again as head of state when his term ends in 2024 — as constitutional changes last year allow him to do. The Kremlin watched thousands take to the streets in neighbouring Belarus last year after Alexander Lukashenko — who became president six years before Putin — declared what they saw as a bogus election victory.

There is little sign, for now, of opposition reaching those levels in Russia. Many elderly voters and those outside the cities remain loyal or see no alternative to Putin. But the clampdown further squeezes the space for debate, criticism, and exchange of ideas that developed economies need to thrive. Clever entrepreneurs, and many foreign investors, are taking their business elsewhere. Chances are petering out of ever weaning Russia’s economy off its dependence on digging up metals and fossil fuels, or curbing the corruption that corrodes the system from within.

Authoritarian systems can sometimes be “enlightened”, with intentions to drive through liberalising reforms or even pave the way for a transition to democracy. Some in the president’s circle in the early 2000s believed this was his plan. Instead, the regime’s essential emptiness has become clear. The urge to cling to office is motivated by what some insiders say is a messianic delusion that only Putin stands between Russia and chaos. It reflects, too, his own fear and that of system insiders of what might become of them all if he were toppled.

This is a misfortune for Russia’s people, above all. But it is hazardous for global security. Putin remembers how his popularity surged after the 2014 annexation of Crimea; Moscow continues efforts to undermine Ukrainian sovereignty and is increasing its sway over Belarus in return for bolstering Lukashenko. Portraying Russia as a “besieged fortress” that the west is bent on undermining both reflects genuine Kremlin paranoia and is useful for rallying patriotic support. European leaders mostly understand this threat; the Biden administration, more focused on China, should pay closer heed.