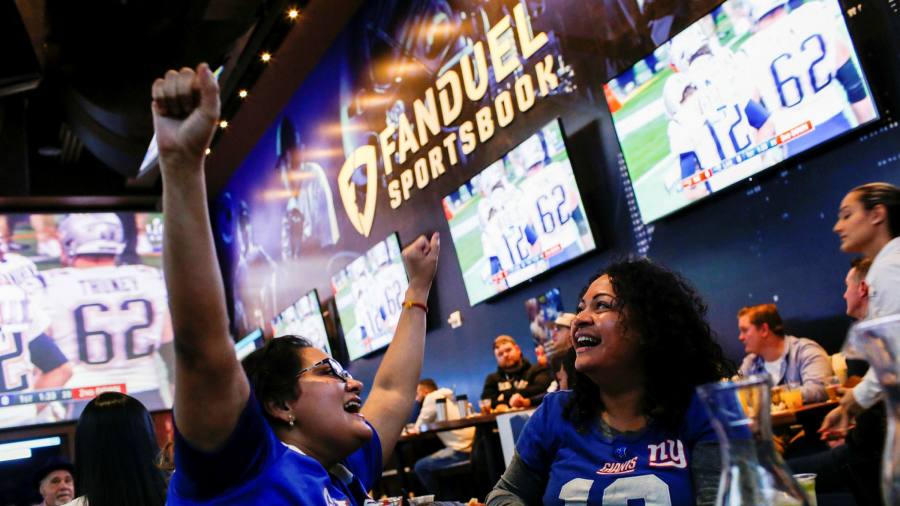 Sign up to myFT Daily Digest to be the first to know about Flutter Entertainment PLC news.

This year’s cross-Atlantic raid on UK-listed companies has caused no end of fretting. Less examined is how America’s biggest online betting franchise came to be picked off by a bookmaker with headquarters in the Dublin suburb of Clonskeagh.

In 2018, Flutter Entertainment (then called Paddy Power Betfair) agreed to buy majority control of FanDuel. Officially a merger of US businesses, the announcement was sketchy on price but, according to early investors, carried a headline valuation of approximately $550m.

It was a steal. A couple of weeks earlier the US Supreme Court had scrapped the federal law that prohibited sports betting for the previous 25 years. So began a phase of explosive growth on regulatory underpinnings that boosted FanDuel’s value, as assumed by analysts, to about $18bn — or slightly more than half Flutter’s market value.

FanDuel started life as a news prediction site, Hubdub, which had a following among super-forecasters but after the online advertising market collapsed in 2008 generated very little money. Using a loan from the Scottish government, its Edinburgh-based founders pivoted into fantasy sports subscriptions, then drifted away as their hobbyist enterprise grew into a Trojan horse for penetrating America’s arcane betting laws.

Offering games of skill rather than chance meant regulators treated FanDuel more leniently than online casino and poker operators. And, when states began to regulate sports gambling, it already had a fanatical customer base in place.

Flutter’s interim results on Tuesday were all about FanDuel.

A presentation from Peter Jackson, group chief executive, set out in granular detail how the division should reach profitability by the end of 2023. Proprietary software developed over several decades means Flutter can offer more markets than rivals at better odds while raking in industry-leading margins. Most bookies talk of superior systems, of course, but Flutter’s claims are backed up by figures. The most eye-catching is FanDuel’s market share, which is already more than 50 per cent ahead of DraftKings, its only rival of note.

But being a US market leader that is yoked to a cash cow international business has downsides. Attaching a sector average value of about 12 times earnings to the remainder would suggest FanDuel is approximately 30 per cent cheaper than DraftKings’ US-listed stock. Jackson is investigating a Wall Street spin-off for FanDuel to squeeze out some of this hidden value, but the abrupt exit of its chief executive Matt King in May pushed the plan back to next year.

A lack of CEO is just one of the many uncertainties that help explain FanDuel’s apparent discount. Another is the overhang of Flutter shares given to a KKR-led consortium when the company bought out FanDuel minority investors in 2020.

Yet another is the possibility that US broadcaster Fox will take an 18.6 per cent stake in the business using a knock-down headline valuation of $11.2bn. Flutter gave Fox the call option in 2019 as compensation when it bought out partner business Stars Group. Fox wants the same value applied as in the 2020 minority buyout and has filed an arbitration claim, which is unlikely to be concluded this year.

Ditto a long-running case with the Kentucky Supreme Court, which in 2015 fined Stars $290m for running online poker games. The court last year reversed an earlier judgment in Stars’ favour and increased the damages levied on its new owner to $870m plus 12 per cent compound annual interest.

These short-term uncertainties, along with DraftKings losing some of its valuation froth since March, explain why Flutter shares are down almost 10 per cent in the year to date. The bigger picture centres on whether an Ireland-based business can retain its dominant market position across the pond.

Ladbrokes owner Entain has been trading at a record high on speculation of another takeover offer from MGM Resorts. William Hill has already gone to its US partner, Caesars Entertainment, as the Las Vegas casino operators try to buy in expertise. None can match Flutter. Even at its market value of almost £25bn, the odds on a transatlantic takeover approach have been shortening.