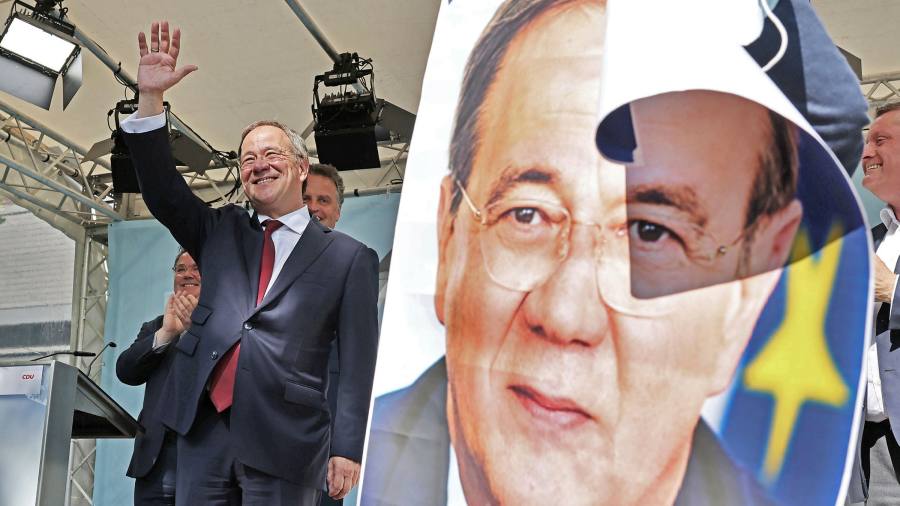 Sign up to myFT Daily Digest to be the first to know about Armin Laschet news.

With four weeks to go, Germany’s federal election is wide open. The contest has so far lacked the substantial debate that the country’s many challenges merit but at least it will have the drama of an uncertain outcome. Several coalition permutations are possible after polling day on September 26. The prospect of a government without Angela Merkel’s Christian Democrats is now real. It is not the smooth political succession that Merkel, Germany’s outgoing chancellor, might have hoped for.

The uncertainty has much to do with the weakness of Armin Laschet, the chancellor-candidate for Merkel’s CDU and its Bavarian sister party the CSU. If Laschet, the regional premier of North Rhine-Westphalia, thought he could copy Merkel’s inoffensive centrism and cruise to victory, he was mistaken. Germans seem turned off by his blandness. His campaign lacks any cut and thrust. Under Laschet’s leadership, the CDU seems to have run out of ideas after 16 years in power.

His ratings are dire. Surveys suggest conservative voters, always lukewarm about his candidacy, would prefer him to step aside for Markus Söder, the Bavarian premier, even at this late stage, according to various opinion polls. It is too late now, with postal ballots already being sent out.

Having enjoyed a lead earlier in the summer, the CDU is now level-pegging with the centre-left Social Democrats, who were written off as a spent force only weeks ago. Some polls put the SDP in the lead. It increases the chances of a so-called traffic light coalition, comprising the SPD, Greens and the liberal Free Democrats, although some differences may be hard to overcome.

The SPD’s fortunes have improved markedly thanks to the sure-footed campaign of Olaf Scholz, their chancellor-candidate who is also Germany’s finance minister. According to surveys, Germans would much rather he became chancellor than his rivals. He may be wooden but his experience is reassuring. Having twice served as a minister under Merkel, he embodies continuity with change more convincingly than Laschet. Indeed, Scholz is styling himself on the outgoing centre-right chancellor. He has adopted her trademark rhomboid hand gesture. And an SPD campaign advert in a woman’s magazine carried the tongue-in-cheek slogan ‘He’s got what it takes to be Madame Chancellor’.

In contrast to Scholz, Laschet and Annalena Baerbock, the Green candidate have betrayed their inexperience. Both made gaffes and then, sensing a need to play it safe, failed to regain momentum. Baerbock soared into the lead soon after entering the race, a breath of fresh air in the stale atmosphere of the grand coalition. But her mistakes, while minor, have raised doubts about her leadership qualities. Most polls now put the Greens in a clear third place. Baerbock and Laschet both suffer from the nagging feeling that other party nominees would perform better than them.

Germans seem largely unimpressed with their chancellor candidates, Scholz excepted, and with the coalitions that could eventually take office. Political fragmentation means it is harder for Germans to connect their vote with the various formations. Merkel’s enduring popularity casts a long shadow over German politics. But there is still everything to play for in the final weeks. Germany above all needs a serious policy debate about its export dependency on China and its security dependency on the US, which have underpinned its success but look increasingly untenable. Only then can voters come to a proper view about who should lead them into the post-Merkel era.