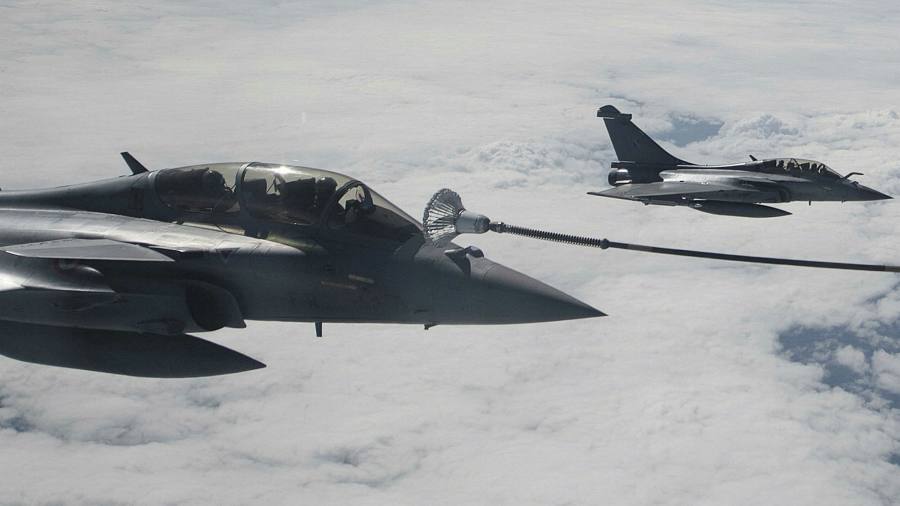 There were two reasons for France’s defence industry to celebrate when the United Arab Emirates agreed to buy 80 Rafale fighters from Dassault Aviation last month.

First, it was sweet revenge for the humiliation last autumn when Australia walked away from a submarine deal in favour of an alliance with the US. There must have been a frisson of satisfaction in Paris when Abu Dhabi, days after agreeing to buy the French fighter, suspended talks with the US on the purchase of Lockheed Martin’s F-35.

Second, the UAE’s order — worth an estimated €14bn — will guarantee production of the Rafale through to 2031, as well as work for more than 400 French companies in the supply chain.

It will also help fund France’s investment in future upgrades to the Rafale, which is now expected to be in service through the 2050s.

Yet, while the deal has a lot going for it from a French perspective, it risks destabilising Europe’s efforts at defence collaboration. For it strengthens Dassault’s hand in the still-troublesome negotiations with Airbus’s German-based defence division over Europe’s proposed Future Combat Air System (FCAS).

The last time Dassault — and by extension the French defence ministry — felt it wasn’t getting what it needed from a European fighter programme, it walked away. The result was Dassault’s Rafale.

Launched in 2017 by former German chancellor Angela Merkel and French president Emmanuel Macron, FCAS was an overtly political project. It showed both countries’ determination to bolster Europe’s sovereign military capability after Britain’s exit from the EU. In 2019, Spain joined the programme.

The problems began when politicians handed it to industry. From the start, it was marked by squabbling over technology sharing and leadership of the most critical parts of the programme. The fighting was exacerbated by fundamentally different ideas of what collaboration meant.

“French collaboration is making sure you get the most effective output,” generally under French leadership, says one European defence executive. “In Germany, it is partly about the best athlete, but also about industrial workshare.”

The project also forced together two bitter rivals — Dassault and Airbus Defence and Space. But last year it seemed Europe’s political ambitions had gained the upper hand. A deal on basic principles was struck and industrial agreements were reached on six of the project’s seven pillars, spanning manned and unmanned aircraft, space and terrestrial communications, cutting-edge stealth technologies, artificial intelligence and more.

But divisions remain on the seventh pillar — the next-generation fighter jet itself — and there is no sign of imminent compromise.

Both sides have logical reasons for digging in their heels. Dassault, standard bearer of France’s sovereignty in combat aircraft, argues it needs to develop and manage the crucial flight-control system itself, for example. But Germany understandably expects its industry to have access to the technology, having pledged billions for the project.

It is in this context that the UAE’s Rafale deal could tilt the balance, argues Francis Tusa, consultant and editor of Defence Analysis newsletter. “It has changed the equation,” he says. “France no longer needs Germany. The profits they get from the UAE deal will finance upgrades to Rafale.”

“The days for the project are numbered unless the Germans understand where they are in the pecking order,” Tusa adds. “They are not equals in industrial capability.”

Meanwhile, the new German government’s plans to codify into law the country’s tougher restrictions on arms exports — potentially limiting them to just Nato and the EU — is adding to tensions. Such constraints on exports “would be a deal killer”, said one French defence executive.

It would be a significant blow to Europe’s defence ambitions if France chose to walk away again from a European fighter. It would be a failure, too, for Macron, who has prioritised collaboration during France’s presidency of the EU. But presidential elections are looming in April and the Dassault family does not just control a key French defence company. It owns the politically influential Le Figaro newspaper.

Ultimately, while only politicians on both sides can resolve the stand off, that may have to wait until France goes to the polls. But the longer the stalemate continues, the greater the risk for Europe that its latest test case of co-operation begins to fall apart.