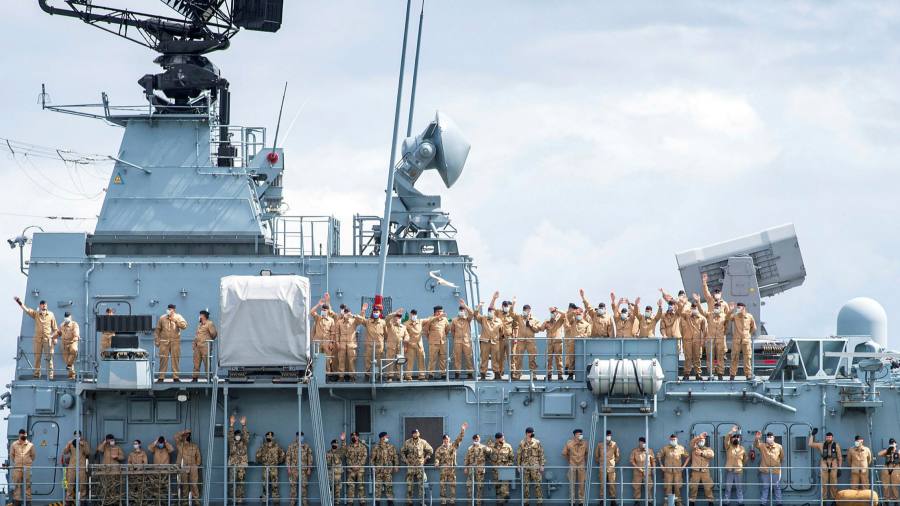 Sign up to myFT Daily Digest to be the first to know about German politics news.

Eight weeks before the September 26 elections that will conclude Chancellor Angela Merkel’s 16-year leadership of Germany, a German frigate, the Bayern, left its home port of Wilhelmshaven for a journey to the Indo-Pacific. German defence minister Annegret Kramp-Karrenbauer remarked that deploying the frigate to this region of intensifying geopolitical contest was a contribution towards “stability, prosperity and a rules-based, multilateral order”.

Much heralded as a symbol of a new geopolitical seriousness in Berlin, the Bayern’s seven-month mission actually represents the confusion at the heart of German security and defence policy.

The German government intended the mission to reassure its partners in the Indo-Pacific that Berlin cared about their security concerns and was willing to act on them. But Germany’s diplomats also wanted to reassure Beijing that Germany’s engagement in the region was not directed against China. Germany therefore requested a port call in Shanghai before the Bayern enters the South China Sea.

This produced consternation among the very partners that were meant to be assured and handed China unexpected leverage, which Beijing promptly deployed — requesting much more detail on the German mission and its intentions before a decision on the port call could be granted.

Germans still struggle to see international affairs as being characterised by genuine clashes of national interests, not simply misunderstandings that can be resolved through indefinite discussion. The mainstream of German security debate is informed by ideas that are of dubious value in a rapidly changing international environment.

Two ideas stand out against the backdrop of intensifying great power competition. One is the argument that Germany should adopt a degree of ambivalence and equidistance between the US on the one hand and its illiberal and undemocratic adversaries, primarily China and Russia, on the other.

The second is a tendency to treat military power, and power politics more broadly, as anachronistic residues of an old order that no longer exists or which Germany can ignore. Germany is a powerful country, but the purpose and strategic trajectory of that power have been aimless, partly because of these views.

In security and defence policy terms, the next German government should abandon the shibboleths of the Merkel era. Instead of holding on to the dogmas of the past, it should attempt to adopt a strategic mindset. Doing so is necessary and urgent because the rise of resurgent, revisionist and repressive powers — China and Russia — threatens the international order upon which Germany’s postwar security and prosperity were founded.

Those hoping to lead the country after next month’s elections should explain to their voters that powerful external actors do not seek compromise or integration, but to undermine the basis on which German security and prosperity rests. Germans do not need to be shielded by their leaders from what the eminent British strategist and writer Sir Lawrence Freedman called the “dark side to the strategic imagination”.

Germany’s goal, informed by this strategic mindset, should be to contribute to the defence of the western international order against assertive, expansionist and authoritarian regimes, and in a way commensurate with its political and economic stature. Germany has a responsibility to do so because it was that same order that enabled its own rehabilitation in the form of a liberal and prosperous democracy, and it continues to underpin it.

The most consequential challenge to western interests will be in the Indo-Pacific: China can challenge the US more broadly and deeply than Russia or any other illiberal and authoritarian power currently could. What is absent from the German debate is the realisation that the defence of Europe is linked to the Indo-Pacific: sooner than most expect, the US is likely to be strategically preoccupied with China. For 75 years, US military power has underwritten European security and, to a significant extent, the global order as well.

As the China challenge undermines US predominance, Europe will need to be able to defend itself against a revanchist Russia while also making a wider global contribution to the defence of the liberal order. Diplomacy and geoeconomic statecraft will contribute to this defence.

But German military power will be an indispensable component of Europe’s self-defence. Germany cannot afford for its political class to ignore this reality. Unless it adopts a strategic mindset, the coming decades will provide a hard education for Berlin.