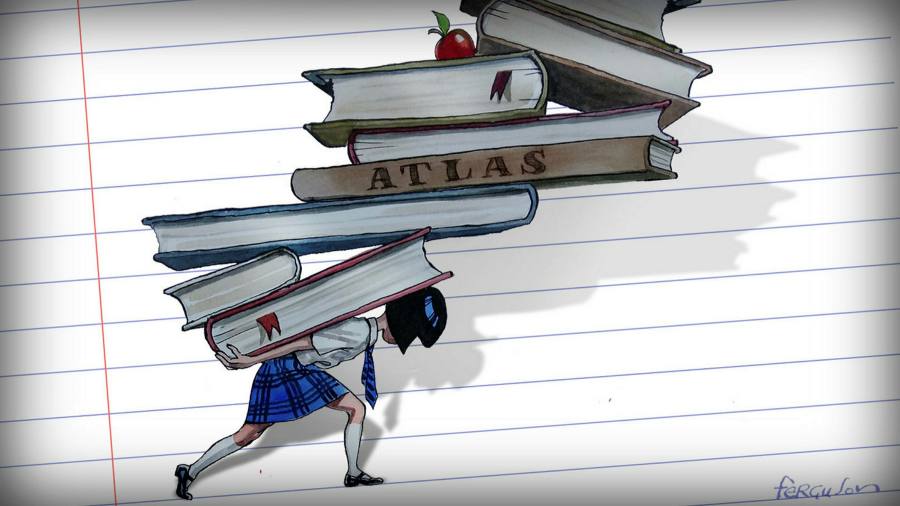 Sign up to myFT Daily Digest to be the first to know about FT Secondary Schools news.

School starts at 8.25am and finishes at 3.30pm, with perhaps another hour for an extracurricular club. So far, so normal — except the day is just beginning. With luck, there is time to dash home for a snack, before another round of lessons at cram school from 5pm to 8pm. You commute home from that, eat, do your school homework then collapse into bed before getting up and doing it all again the next day. It is a standard schedule for many 10-year-olds in Tokyo.

For a parent, the cram school might cost $500 a month. If the teachers do their job well, your offspring will pass an exam at age 12 and enter a prestigious private junior high school, which will deliver them to a prestigious high school, then, perhaps after some more evenings at cram school, to a prestigious university, setting your child up for a life of comfort and success. The total cost in dollars could easily run to six figures: some studies suggest that Japanese and South Korean families spend more than 10 per cent of household income per child on private education.

As well as causing inequality and other social woes, demographers link the extraordinary cost of east Asia’s education arms race to its extraordinarily low fertility rates, which stand at 1.36 children per woman in Japan, 1.3 in China and 0.84 in South Korea. China’s recent decision to crack down on private tutoring — it has banned companies that teach the school curriculum from making profits, prompting shares in listed education companies to tumble — therefore makes a certain kind of sense.

Tutoring, President Xi Jinping told a group of educators, is “a chronic industry that is very difficult to cure”. But defining tutoring itself as the problem, and cracking down on supply while doing nothing to allay the demand, is counterproductive and destined to fail: it may even cause birth rates to fall, not rise. Rather than restricting the supply, China and its east Asian neighbours need to tackle the high-stakes, zero-sum exams that make tutoring so popular in the first place.

As countries become richer, there is almost always a fall in birth rates, and that is closely linked to spending on education. The Nobel laureate Gary Becker explained the decline in terms of a choice between quantity and quality: rather than having many children, parents have only a few, but invest in their schooling instead.

That choice has a couple of unique features. First, parents tend to invest the same amount in each child. As Becker put it, a rich person might well plan to own both expensive and inexpensive cars — a Ferrari to show off and a Toyota to do the shopping — but nobody plans to have expensive and inexpensive children. Second, the costs of quantity and quality are not separate: your private school bill is the fee multiplied by the number of children you send. This link helps to explain why birth rates fall so fast when countries develop. To invest in all your children, you cannot have so many.

If restricting the supply of tutoring raises its cost, perhaps by forcing parents to employ private tutors or even give up their own paid work to teach their kids, then quite plausibly they will respond by having fewer children, not more, so they can maintain the level of investment per child. That is not what Beijing desires.

Education mania in east Asia is fuelled less by the wish to have brilliant offspring — in surveys, many Japanese parents say that cram schools are bad for their children — than by systems that pit people against each other early in life, with extreme rewards for those who ultimately graduate from the best universities.

In China, every student sits for a citywide high school entrance exam at age 15. Half will be accepted; the rest will have no choice but to go to a trade school. Then at age 18, the high school students compete in national entrance exams, where the acceptance rate at top-tier universities — which are gatekeepers to the best jobs — is about 2 per cent, and sometimes much lower. A retake restricts your university options. Given such incentives, what parent would not pay for a tutor?

Rather than cracking down on tutoring, the better answer is to remove the elements that make one child’s gain another child’s loss. That means removing high stakes exams early in life, such as Japan’s contests to enter the best private schools; investing more in regular education, so a trade school or a second-tier university is still a rewarding choice; and encouraging elite universities to select their intake in ways less easily gamed by aggressive tutoring-to-the-test.

There are signs that east Asia, the world’s fastest ageing region, recognises the need to reduce the burden on parents. Japan has made pre-school education free. China wants to improve its trade schools. The competition to enter elite universities, however, remains extreme.

Tutoring mania is one reason why east Asia does so well in cross-border tests run by the OECD. The most recent maths ranking was: China, Singapore, Macau, Hong Kong, Taiwan, Japan and then South Korea, before the appearance of Estonia, the top-ranked European country. That is rightly a source of pride. But it comes with a dark side: there is little satisfaction in having the world’s best-educated children if there are hardly any of them left.