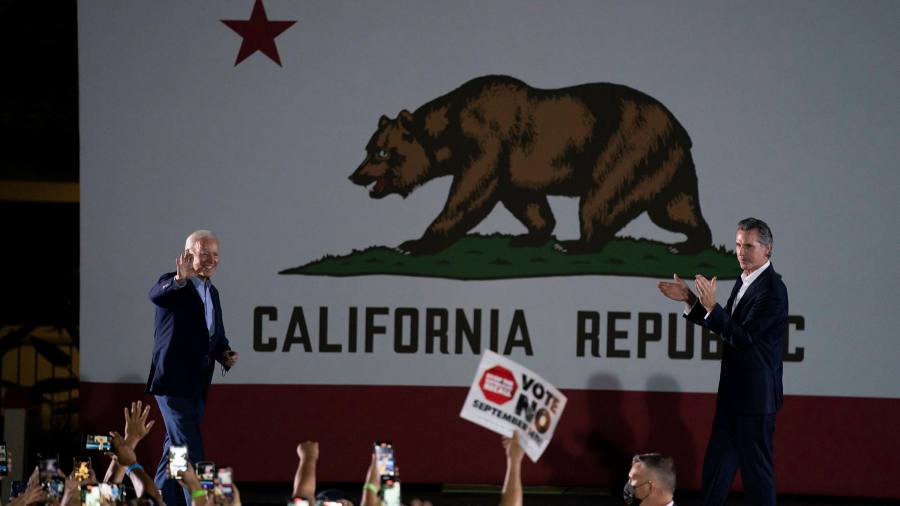 Sign up to myFT Daily Digest to be the first to know about California news.

It is some feat to persuade the young that a Republican ran Los Angeles in this century. Even if you can sell them on the fact of Richard Riordan, there is the conservative pedigree of the wider state to explain. Yes, Ronald Reagan governed it (tax rise and all). Richard Nixon called the lemon groves of Yorba Linda home. The New Right, which nurtured both these presidents, first stirred in Orange County. At the turn of the millennium, more than a third of Californian voters were still registered Republicans.

That share is below a quarter now. More than enough, of course, to subject Governor Gavin Newsom to a recall election for, among other things, a selective approach to lockdown rules. Still, there are Democratic supermajorities in both houses of the legislature and an all-Democrat executive. As if to prove and send up this monoculture, Newsom’s predecessor once proposed a wall “to defend ourselves from the rest of this country”.

The phrase here is “partisan sorting”. This urge of liberals and conservatives to live among their own, in distinct states, has marred the US for a while. Among voters, it compounds mutual cultural incomprehension with territorial distance. Among politicians, it makes for uncompetitive elections and complacent rule. While a cerebral conservatism endures there (the Hoover Institution, the Claremont Review of Books), California has embodied the trend as much as anywhere.

There are other ways in which a state once viewed as not-quite-America — and that blushed at the praise — now reflects the nation. As profound a 21st century trend as the “big sort” is the demographic rise of Asians. In 2009, they outnumbered people of Hispanic origin as immigrants into the US. The country’s total Asian population has increased 88 per cent in two decades. By mid-century or just after, their numbers are projected to quadruple. The nation’s internal tilt to Asia has been as quick and quiet as its geopolitical one has been fitful and overhyped.

As such, California, with one-third of all US Asians, is, if not quite the rule, then no longer such an exception. Its Pacific setting (count the district of Sawtelle, and LA has two “little Japans”) used to mark it out in a country that was largely European in its immigrant stock and elite tastes. That is less and less true by the year.

The state’s Asian-ness links it to the US in another way. Even as it cultivated an exceptionalist self-image, what used to tether California to the nation was its cultural wares (greedily consumed by other Americans) and fiscal contribution (greedily consumed by other Americans). Now, as the superpowers tussle, the state’s China-facing geography does the same trick. From the naval base at San Diego to the Bay Area’s tech exports, California is the conduit through which the US vies with its rival across the sea. Its sense of detachment from the national story will be ever harder to sustain.

Of all the points of convergence between California and the US, the last is the most confounding. The two entities seem to pay next to no economic price for their dysfunction.

The recall, the second in a generation, is of a piece with California’s broader farrago of direct democracy. It is hard to defend even on its own populist terms. The rules allow an incumbent to win 49 per cent of the vote and lose to a challenger with much less support. Throw in the intransigent unions, the Democratic monopoly, the miracle blend of high taxes and frail infrastructure, and the state should be poorer than it is. Instead, with two-thirds as many people, it continues to have a larger output than either Britain or France.

This mix of political strife and material progress would stand out if it weren’t even truer of the US as a whole. National politics is flawed in a different way — too intense a partisan competition, not too little of it — but to a much greater extent. Nine months ago, the country failed to achieve so much as a peaceful transfer of power. And still the US produces growth rates and companies that nations in fine civic health cannot equal. For we who parse politics for a living, who tend to believe it is the sine qua non of national success, imagine the embarrassment.

“The Great Exception” is what the California-watcher Carey McWilliams named it. And no one would claim it rivals, say, Illinois as the average or echt state. What it does is capture the most important national trends in intensified form. Its governor no longer holds the wild card in America’s deck of 50.