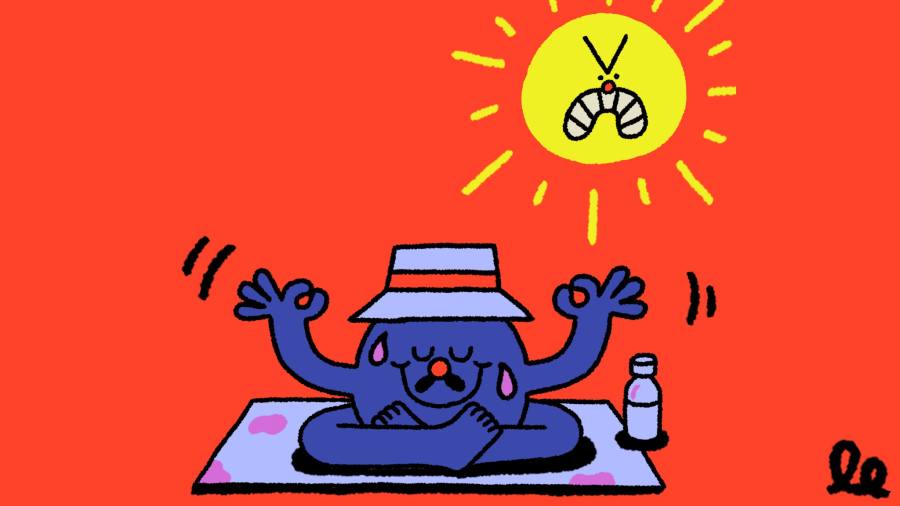 Sign up to myFT Daily Digest to be the first to know about Wine news.

French wine’s warm, comfortably contoured belly lies in the southern Rhône. Châteauneuf-du-Pape is its leading appellation, its appeal founded on a smiling generosity, depth and amplitude. Global warming, though, means that this stony, sandy zone just north of Avignon has to confront a new seasonal precocity and solar fierceness. Pressured by these conditions, Châteauneuf’s wines risk losing their consoling balances, their inner harmony and grace.

The figures are alarming. Warm summers mean sweeter grapes, which produce higher alcohol. Over the past 30 years, Châteauneuf’s wines have gained two per cent alcohol by volume while losing more than half a gramme per litre of acidity.

The harvesting date has come forward by 15 days over the same period, as a result of grapes ripening more swiftly under brighter skies and during longer days. Night temperatures, meanwhile, bring less respite than in the past, having risen by 0.7C over the same period. Ever-earlier budburst increases the risk of spring frost damage. This hazard was formerly rare in these wind-coursed stonefields, yet astonishingly, they have been frost-hit in both 2020 and 2021. I live an hour from Avignon, so as lockdown eased in mid-May, I went to talk to Châteauneuf growers about their future.

The topic was on everyone’s minds, and notably the effect of drought on the vines. The region’s modest 620mm of annual rainfall has not greatly diminished of late, but it falls less reliably in spring and summer, and increased heat and insolation cause swifter water loss by evaporation and transpiration. “We are moving,” notes Victor Coulon of Domaine de Beaurenard, “from being a Mediterranean zone to being a semi-desertic zone.”

Irrigation is now permitted in Châteauneuf and will soon be accessible to most of the appellation, but it remains deeply divisive. “I was a fierce critic of irrigation,” says Isabel Ferrando of Domaine St Préfert in the vulnerable south-west of the appellation, “but it is the only way. If it’s 42C in the vineyards and there is a fierce wind, the vines just drop everything.” Others, though, such as Jacqueline André of Domaine Pierre André (no irrigation) and Florent Lançon of Domaine de la Solitude (just 2ha irrigated out of 37ha) believe that ways must be found to make the vines more resilient and to help them adapt. Vineyard practices are consequently changing swiftly. The old stonefields are less visible now as growers plant cover crops between the rows. In midsummer, these are crushed (but not cut) to make a mulch that can reduce soil temperatures by as much as 8C according to César Perrin of Château de Beaucastel. Rows of trees are also being interplanted with the vines.

Châteauneuf, though, has one enormous advantage over its neighbours. As this was France’s pioneer appellation, its rules were written with more flexibility than for those that succeeded it. Thirteen grape varieties (or 22 if colour variants are included) can be used, in any combination or proportion, meaning that (in the words of Isabel Ferrando) “the greatest response to climate change in Châteauneuf-du-Pape is blending”. Indeed, the constitution of Châteauneuf is quite literally changing as old, late-ripening and more austerely flavoured varieties such as Counoise, Muscardin, Vaccarèse and the white Picardan join those long planted in order to play what Ralph Garcin of Château Nalys calls “a more architectural” role in blends. Grenache is now planted more circumspectly, as its flamboyant ripening abilities make it the main driver of rising alcohol levels. Most growers are also reducing their plantings of Syrah, whose natural home lies upriver in the northern Rhône and which is uncomfortable in fierce heat; so too the white Roussanne. The late-ripening red Mourvèdre is growing in significance.

There are changes in the cellar too. The once-ubiquitous but largely abandoned practice of fermenting red wines as a whole bunch, stems included, to bring freshness and slightly reduce alcohol levels is being readopted, as is the use of earthenware, concrete or ceramic vessels in place of wood for ageing. White varieties are increasingly used to freshen red wines: the appellation allows this flexibility too.

No appellation as large as Châteauneuf (it occupies 3,200ha) can ever change its style swiftly, but some of the micro-production wines I tasted during my visit suggested that the region is quietly finding a new aesthetic path. Thierry Sabon of Clos du Mont-Olivet is a hugely talented winemaker. He has created a wine he calls Compagnons Inconnus (forgotten companions). The 2019 vintage is an echo chamber of subtle allusions, shapely and poised, seamless, ringing and resonant. It contains just 3 per cent Grenache and almost no Syrah, though every permitted variety is in there. The lead varieties are Mourvèdre (32 per cent) and Vaccarèse (25 per cent). It was concrete-fermented with no destemming, then aged in jars for six months and old, large demi-muid barrels for another seven.

Another inspirational wine of this sort is the Vin de la Solitude created from 2016 by Florent Lançon at Domaine de la Solitude, bottled without the appellation’s heavily embossed armorial glassware and labelled with an 18th-century facsimile label. This wine includes most of the appellation’s varieties co-fermented with all of their stems more or less until Christmas, as Lançon remembers his grandmother describing to him: “the vats would be sealed up at Christmas and everyone would go hunting.” A third wine of this sort, made from all 13 varieties and including 20 per cent whites, is Domaine de Beaurenard’s Gran Partita. Experimental lots I tasted at other domains suggest further surprises are in store, and the increasing use of Clairette, Bourboulenc and Picpoul in the white wines of Châteauneuf is also bringing freshness, zest and perfume to this underrated wine.

Veteran François Perrin of the celebrated Château de Beaucastel provides perspective. “The only thing that worries me,” he says, “is the alcohol figure on the label. And that’s mainly a problem in the UK and France. Much less in the US, and not at all in China. The solution is blending and vineyard work.” Beaucastel has always championed Mourvèdre and Counoise and still does, but the Perrins continue to believe in amply ripened, late-picked Roussanne that has undergone the acidity-reducing malolactic fermentation. Perrin’s eyebrow is raised when I question the future of Syrah here. “My first vinification was in 1978,” he recalls. “We had the eighties, we had the nineties — and they included terrible years, years when the crop was ruined. We don’t have that any more. I don’t know what the future holds. But I do know we have never made such good wines as we have made in the last 20 years.”