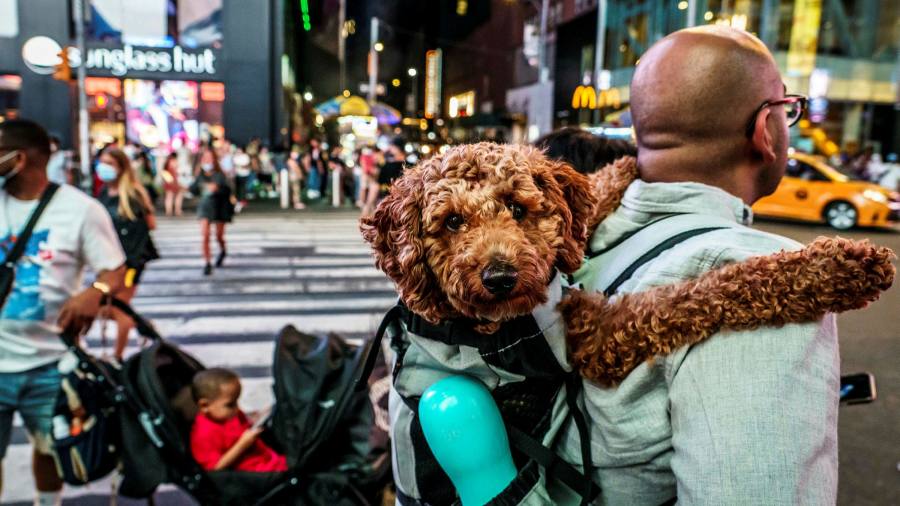 Get a shot of weekend inspiration with the best in life, arts and culture. Delivered every Saturday morning.

Princess Diana called it the “moving carpet”. In the weeks after her death, others weren’t so forgivingly droll about the royals’ corgis. Here, went the theory, which mentioned the horses too, is a family that gushes over all creatures great and small, except humans.

Don’t think it lacks purchase outside England, this trope of the cynophile blue blood. “That’s the thing you gotta remember about Wasps,” says Gordon Gekko, shaking his glossed head in Wall Street. “They love animals. They can’t stand people.”

How elite tastes cascade down. The proliferation of dog parks, the vast pet-serving industry: these trends will not be lost on any reader. I think you have to be single, though, or otherwise out-and-about, to know the weird intensity of what is going on. This is a world in which an apartment building’s pet policy can make or break it. It is a time of — the most anaphrodisiac phrases in the language, these — “dog moms” and “dog dads”.

Their dog or cat is the only endothermic mammal that some outwardly successful peers can count on for affection, or don’t have to walk on eggshells around

And this is before you get into the Alexandrian empire that pets have built online. Hector Bellerin plays the world’s favourite sport at the highest level, or thereabouts. With interests in fashion and politics, a voice that is equal parts Barnet and Barcelona, he has the most diverting YouTube channel of any athlete I know. Hosico, a Russian-based cat, has more than double the subscribers.

I like a furred quadruped as much as the next man. I still skip the bit in The Human Factor, Graham Greene’s tightest yarn, where the turncoat spy must dispose of his dog en route to Moscow. If I, with an urbanite’s sentimentality about animals, am left standing by the ardour out there, a line has been crossed.

In the US, a greater share of millennials have pets than baby boomers do. What distinguishes the one generation’s ownership from the other’s, though, is not quantity so much as style. Where a pet was once the badge of suburbia, it is now a metropolitan statement. Where it was an accessory to a family, it is now as often the substitute for one. I grew up on streets where the pets were regarded with a sort of gruff fondness. I now move among gushers and coo-ers, hailing each caught mouse as though a child has brought home a serviceable potato painting. It is hard to know if generation is the crux here, or class.

Pet-owners young and old are prone to solipsism. Both assume that everyone welcomes the attentions of an animal. Both want you to chuckle as your Kooples shirt is matted with hard-to-launder fibres. But only one generation would name the creature and its species as an interest. Only one would define their relationship to it as less proprietary than quasi-pastoral.

The snob in me, who takes up a lot of space, wants to see this pet-worship as extended adolescence. It is of a piece with: middle-aged upspeak, double-graduates who are liable at any time to write a children’s book, and the pretence that TV series have the weight and texture of Luchino Visconti’s oeuvre. But that isn’t the whole truth by any means.

No, it is much worse than that. You only need brief exposure to a pet-mad millennial to sense that it is not a twee whim being indulged. It is a hole being filled. There is a sadness peculiar to lives that, while good or even grand by world standards, have not worked out as planned. For some people, it is about being reluctantly single. For others, the drag is being reluctantly married. Career disappointment is usually part of the mix. Whatever the specifics of the pathos, it tends to kick in much earlier in life — the thirties — than often assumed. And when it does, pets take on a profound importance as escape and consolation. It is a lot of pressure to put on a beagle. Two generations ago, it might have been religion, volunteer work or a local allotment that did the trick.

Their dog or cat is the only endothermic mammal that some outwardly successful peers can count on for affection, or don’t have to walk on eggshells around. Understand this, and it isn’t strange that our age is rife with the kind of pet-spoiling that would have embarrassed Barbara Cartland. Whether human profits as much as beast is less clear.