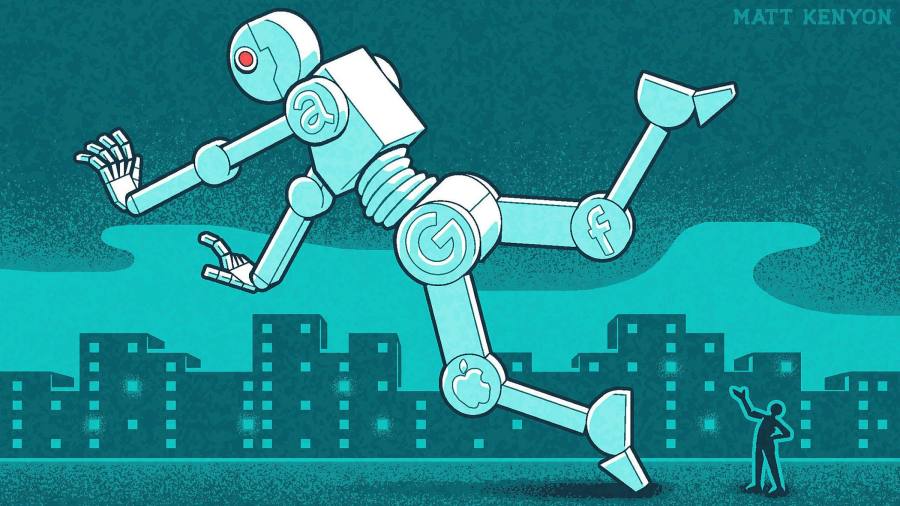 Sign up to myFT Daily Digest to be the first to know about Big tech news.

The world’s tech giants have embedded themselves so deeply in the popular imagination that few people can picture a digital world led by any other names. But this assumption overlooks how quickly capitalism can cut giants down to size.

American tech companies lead the world’s top 10 by market value and many commentators and investors see no reason to question their continued dominance. Dozens of analysts rate each of the big tech firms, and every single one of them currently has a buy rating on Alphabet, Amazon and Microsoft. Apple and Facebook are also more widely favoured than the typical stock.

The conventional narrative is that these giants are growing bigger, faster and more durably than their predecessors. As internet platforms, they benefit from “network effects”, increasing efficiency and momentum as they gain customers and entrenching their hold on the economy at a speed, it has been said, never before seen “in the history of capitalism”.

Only we have seen much of this before.

Given how popular US tech brands have become, it is widely forgotten that a decade ago Amazon and Facebook were not in the world’s top 100 companies by market value. Yet their meteoric rise is not that unusual, either. On average, companies that reach the top 10 rise by around 75 places over a decade to get there, then fade.

Since 1970, companies that finished a decade in the global top 10 have had a less than one in five chance of finishing the next decade there. Oil companies ruled the list in the 70s, followed by Japanese banks in the 80s. Tech names reached the top in the 1990s, but the cast keeps changing.

Only two European tech companies, Deutsche Telekom and Nokia, have ever cracked the top 10, flashing into that club during the 1990s before quickly falling off. Only one company, Microsoft, has reinvented itself often enough to stay in the top 10 club for three decades.

Explosive growth spurts are normal when capitalism is working. So is creative destruction. Big companies grow unwieldy. They talk about staying paranoid but they don’t, really, falling out of touch with young tastes and ceding ground to nimbler rivals.

There are other threats, too. Lately China has shown how fast a regulatory attack can bring down corporate giants, knocking Alibaba, one of its own, out of the global top 10. Whether or not that is a harbinger of what could befall the US tech giants, the risk posed by zealous regulators is less pressing than capitalist competition.

The internet is itself constantly evolving. Giants are racing upstarts to build the next internet platform, which is likely to incorporate elements of artificial intelligence and augmented or virtual reality. Facebook is trying to reinvent itself as host of the “metaverse,” a vision of the internet as a 3D virtual space seamlessly connected to the physical world. As of today, however, the most advanced prototypes of the metaverse exist on gaming platforms, run by newer companies.

The big shifts in global markets have been triggered by central banks raising rates to slow overheating economies; by coincidence, those shifts have fallen near the turn of each decade. The shift that seemed imminent in early 2020 has arguably been delayed by the pandemic, which brought a new surge of easy money out of central banks and into stock markets, and a flood of new customers for big internet services.

This reprieve is likely to pass, however. By late last year, earnings growth for the world’s tech giants had started to slow, relative to the rest of the world. In the past, slower earnings growth has been associated with weaker relative returns for the top 10, and for most an eventual fall from the top.

In the decade after companies reach the top 10, they typically see earnings growth fall over the next 10 years from 16 per cent a year to 4 per cent. As earnings growth slips, so does profitability and market appeal. After finishing in the top 10, the giants usually see returns turn negative, and their relative performance shrinks by 70 per cent over the next decade. In effect, they give back all of the gains they made in their run to the top.

On average, top 10 companies slip over the next decade by around 60 places in the rankings — an outcome that should not be mourned. Competition and churn lie at the heart of a functioning capitalist system. That is why the giants of one decade so often deliver such underwhelming returns in the next one, and shrink in the popular imagination. Expect that pattern to recur unless capitalism is truly broken.