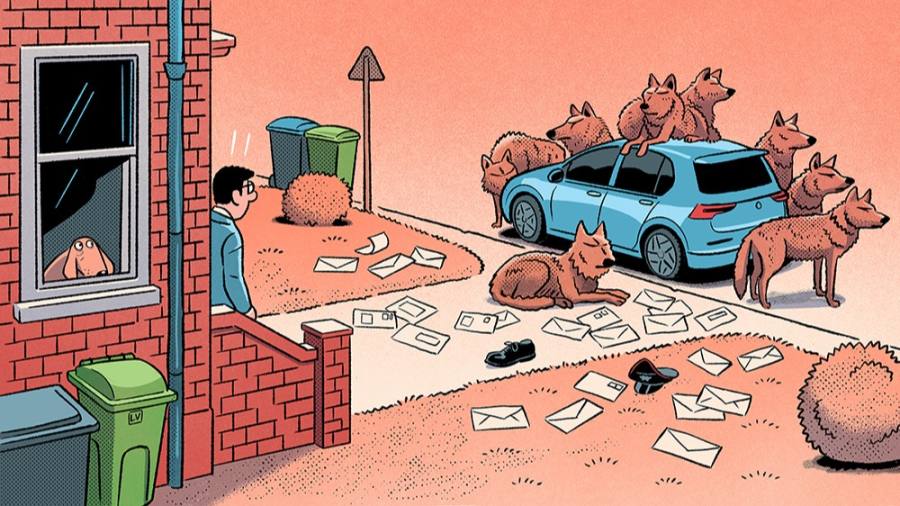 Perhaps it was coincidence but just hours before we’d set off through the woods, I had read one of the seemingly innumerable articles about bringing wolves and wildcats back into the British countryside.

So common are these calls nowadays that you have to wonder if someone has intentionally released a new breed of nature journalist into the media ecosystem. “Once they lived only in the specialist nature publications but now, in a controlled experiment, these writers are being released into national newsrooms and broadcasting studios. If all goes well, within 10 years we should see bear-huggers and lynx-coddlers at every major media outlet.”

Anyway, I’d been reading one of these pieces about getting sabre-toothed tigers back on to the streets of Swindon — or perhaps it was wolves into the forests of Scotland — and so the issue was on my mind when we were suddenly confronted by a large and snarling husky. The good news was that the hound was on a lead. The bad news was that it was a bloody long one.

Happily, the beast was not interested in us but it patently saw elevenses in our small terrier and lunged angrily. This may explain why the notion of coming across an actual wolf on an afternoon walk seems less romantic to me than it appears to lots of others.

And why stop at formerly indigenous species? That doesn’t seem very Global Britain. Why not a herd of wildebeest sweeping across Hampstead Heath?

But there is no doubt rewilding is very much a cause of the moment. Boris Johnson is said to be rather keen on the idea, though if you’ve spent a couple of years in the Bullingdon Club, the notion of wolves roaming the country must seem entirely normal. In fact, while wolves are every bit as wild as Bullingdon members, they are generally more respectful of property.

In any case, rewilding is having its moment. A poll last year showed that more than a third of Brits want to see wolves, wild boars and lynxes reintroduced into the wild, though, obviously, in someone else’s back yard. A quarter even want to see the return of bears, though a significant portion of those had just finished watching Paddington on Netflix.

The most popular return would be birds of prey, beavers and wildcats. The survey did not test support for the return of the Hound of the Baskervilles but apparently there’s quite a lot of enthusiasm for the idea outside Devon.

Beavers are already making a comeback and are now being reintroduced in south-west London though there are also concerns among viewers of GB News that some of the rodents may be arriving illegally, ferried across the English Channel by beaver smugglers. There are questions about rewilding beavers. They bring potential risks to fish, trees and watercourses. More importantly, most of the predators which control them — like bears or wolves — are no longer in the wild. This, of course, is an argument for bears and wolves too but then we’d presumably need lions to control them. Before long we’ll have David Attenborough filming our walk to the shops just in case we get picked off on the way to Morrisons: “This woman wants some avocados. But first she must get past the pride.”

Until such time as the evidence points against it, a few more red kites, wading birds and beavers seem like a good thing. Where I draw the line is with animals that could kill me. Packs of wolves and bears? Seriously? It’s scary enough in parts of the country now. North of the border is overrun by ferocious Scottish Nationalists. As for lynx, well they might not kill me, but they would seriously inconvenience a sheep.

It would, I suppose, be an arguable position if these wild beasts could be trusted to stay in the forests, but one has only to look at the fox population to know that it won’t be long before they head into the towns in search of food. If you think the Prets are empty now, you try getting people inside when a party of wolves is in there enjoying a salmon and mango salad. And few of them will have vaccine passports.

Admittedly, lynxes might be useful in controlling the urban fox population (and can make healthy inroads into deer numbers) but larger animals still seem a risk. We once had a fox den underneath our garden shed and that was annoying enough. If bears made their home there, I wouldn’t be able to reach the door.

And why stop at formerly indigenous species? That doesn’t seem very Global Britain. Why not a herd of wildebeest sweeping across Hampstead Heath or a bloat of hippos in the Bristol Lido?

The reintroduction of birds, insects and maybe even beavers — and, more importantly, wider habitat restoration — is a valuable project. But the restoration of large predators like wolves to Scotland, lynxes to Northumbria and bears to Portobello Road is one of those pointless preoccupations, the faddy romanticism of people fortunate enough to not have to worry about real issues or trouble themselves with the dreary details of converting the economy from petrol cars, domestic boilers and fossil fuels.

Robert is hosting “Boris Johnson, Brexit — and bust?” at the FT Weekend Festival on September 4; ftweekendfestival.com