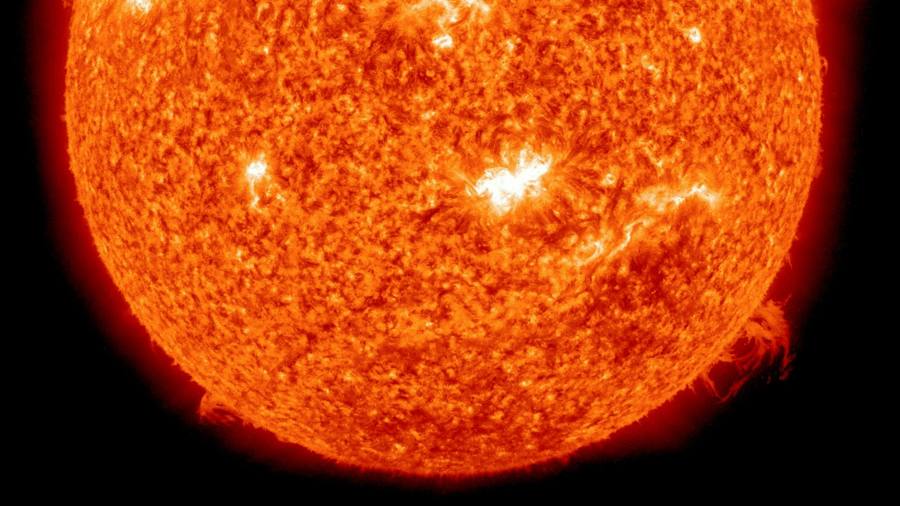 Sign up to myFT Daily Digest to be the first to know about Renewable energy news.

The fireball at the heart of our solar system is powered by nuclear fusion. The crushing pressures in the sun’s core squeeze hydrogen nuclei together so powerfully that they overcome their natural repulsion and fuse. These nuclear clinches generate larger particles with masses that are not quite the sum of their parts.

The missing mass becomes energy, a fiery embodiment of Einstein’s equation E=mc2. The equation shows that, in terms of energy production, a tiny bit of mass goes a long way thanks to the colossal multiplier of c, the speed of light (300,000km per second), squared.

Scientists, lured by the prospect of almost limitless power from minimal fuel, have long dreamt of replicating nuclear fusion in the laboratory. This month, researchers in the US shifted the dial significantly by approaching “ignition”, where a tiny pellet of hydrogen plasma fuel, bombarded by 192 lasers, began to fuse, producing enough energy to continue heating the rest of the fuel in a self-sustaining way.

Professor Jeremy Chittenden, from Imperial College in London, hailed the breakthrough at the National Ignition Facility in California as the biggest in nearly half a century. Chittenden, who collaborates with the NIF, likened the challenge of reaching ignition to striking a match so that it produces a flame. “Ignition is the key process through which we can produce large energy gains because it’s a self-sustaining process — for as long as we can hold the burning plasma together.”

Which, currently, is only a tenth of a billionth of a second. That is because of the extraordinary process that the fuel pellet undergoes. First, it is targeted by the lasers — collectively the most powerful in the world. The rapidly heated outer surface explodes away, prompting the plasma fuel within to reactively collapse. The peppercorn-sized pellet implodes to the width of a human hair, reaching a pressure of hundreds of billions of atmospheres and 100m degrees Celsius, sparking fusion. NIF scientists managed to keep the pellet together long enough to burn about 2 per cent of the available fuel.

The energy produced, 1.3 megajoules, was about 70 per cent of the energy used by the lasers and several times the output of previous attempts. Crucially, it was deemed sufficient to be on the threshold of ignition (there is active debate over the definition). The next hurdle is to reach “break even”, where the energy produced by fusion matches the energy expended to kickstart the process.

The ultimate goal is for the energy out to exceed the energy in, creating a clean, abundant power source (fusion itself is emissions-free and the associated nuclear waste is less than that produced by current nuclear fission reactors, which split atoms rather than fuse them).

The NIF approach is one of several fusion technologies under study. The best known is magnetic confinement fusion, in which hydrogen fuel is trapped and squeezed by powerful magnetic fields. The International Thermonuclear Experimental Reactor in France is a 35-country collaboration to build the world’s biggest tokamak — a magnetic confinement device. This is viewed as a more stable and controllable way of generating fusion power in the long term. It has not yet reached break-even but optimism remains buoyant, especially given the dash to net zero.

The UK government has pledged to build its own prototype tokamak-based fusion energy plant by 2040. Scaling up will not be easy: a viable plant needs an energy output equivalent to hundreds or thousands of the energy produced by the NIF experiment, every second.

Plugging it into national grids and regulating a new form of nuclear power also present bear traps. But the high risks are balanced by potentially astronomical rewards. Investors, including Amazon founder Jeff Bezos, ploughed an estimated $300m into private fusion companies in 2020.

Chittenden emphasises that the NIF is geared towards fundamental science rather than energy production: proving it is possible to build the heart of a star in a laboratory to aid understanding of nuclear processes, including nuclear weapons. “This is a much more extreme state of matter than has ever been made before,” he says. “We can study material that’s under conditions comparable to the first few minutes after the Big Bang.”

Such is the intensity of the electromagnetic radiation that it may even be possible to observe the spontaneous creation of matter, as energy becomes mass. Nuclear fusion, in lighting a path to the future, might one day illuminate our distant cosmic past.