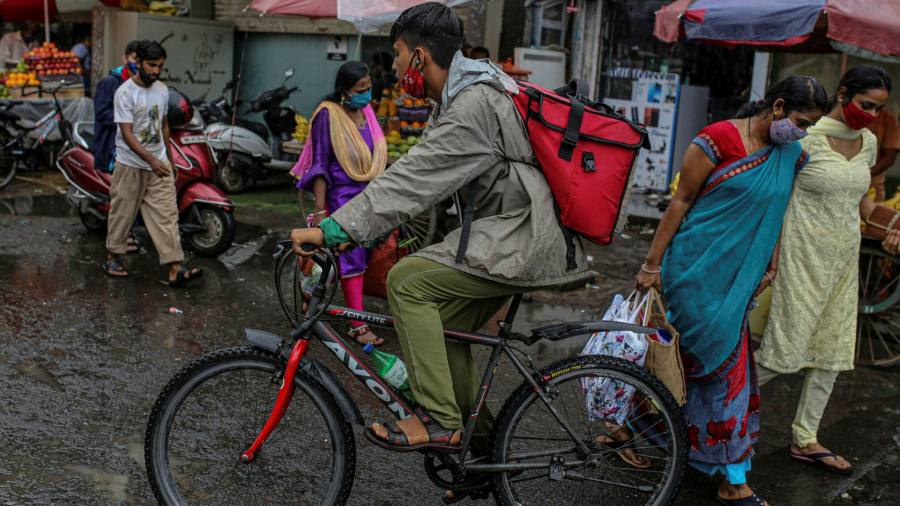 Sign up to myFT Daily Digest to be the first to know about India news.

It is a hot, humid day in my neighbourhood market, where a clutch of Zomato “delivery partners”, clad in their distinctive red T-shirts, sit on a shady bench near their motorbikes, awaiting their first orders to kick off a long day’s work.

Vishal, 23, and Ram, 24, are small-town migrants with college science degrees, which they hoped would help them secure decent salaried work. But the paucity of opportunities for the many graduates of low-quality colleges left them working as shop assistants, earning around $200 a month. From there, they leapt into India’s burgeoning gig economy, joining Zomato’s estimated army of 161,000 delivery personnel. “We had the opportunity for higher earnings,” says Ram, who uses his father-in-law’s motorbike to deliver. Vishal, who previously worked in a computer shop, says, “It does bring in more money but this is very tiring.”

Zomato — founded in 2008 as an online restaurant booking service — recently raised $1.25bn in an IPO that tested investor appetite for India’s maturing tech businesses. On its debut, Zomato shares jumped nearly 80 per cent and today the lossmaking company is valued at nearly $14bn. Co-founder and chief executive Deepinder Goyal, who still holds 4.7 per cent, is worth an estimated $650m.

Vishal and Ram know little of that. The two — who asked that their full names not be used to avoid potential trouble with the platform — earn Rs20, about 27 cents, for delivery within 4km and Rs5 for every additional kilometre. If they do deliveries worth Rs850 in a day, they get a Rs230 performance incentive, which Ram calls a “good work” reward. Zomato says it provides some partners with an “availability fee”. Both say they typically work from 11am to 11pm seven days a week, though Ram says he takes a day off every two weeks to rest.

According to Sabina Dewan, president of the JustJobs Network, around 5m to 10m Indians are now part of the gig economy, connected to slick tech companies including Zomato and its rival Swiggy; Uber and its homegrown rival Ola; and a clutch of start-ups, like Dunzo, which are testing business models of delivering anything to anyone at any time.

For many investors, these businesses are a play on the expected long-term growth of India’s middle class, and their appetite for services such as restaurant meals, personalised door-to-door transport and alternatives to errands. Mostly left unsaid is that they are also a bet on the persistence of a vast pool of underemployed people who are willing to suffer punishing conditions to make ends meet in an economy failing to generate enough jobs for the estimated 12m young people who come of age each year.

“You have a massive oversupply of labour, and young people gravitate towards a sector like gig work that has very low barriers to entry,” says Dewan. “Many are working extremely long hours, constantly keeping the app on, in the hopes they’ll be able to make enough money.”

India’s middle-class adore tech-enabled services and many believe gig workers should be grateful to earn at all. “Most consumers are like, ‘Oh great, this is very convenient’ and the insecurities of the gig workers are not very visible to them,” Dewan says.

The country’s gig army is filled with hard-luck stories. Brijesh, 28, a father of two, has delivered food for Swiggy since his family dairy business collapsed four years ago, when his brother suffered a severe accident that left Rs1m in medical bills.

Some gig workers hope to escape. Sunil, 25, has used a bicycle to work as a Zomato delivery partner for three months, since his father had a heart attack that led to the closure of their small cigarette and tobacco stall. “The moment I get another job, I will leave this,” he says.

Others are resigned. Sunil, 32, has worked with Zomato since losing his salaried job as a popular restaurant’s dedicated deliveryman. “Where are the jobs?” he says. “We are just desperate to have a means to earn, and so we are doing this.”