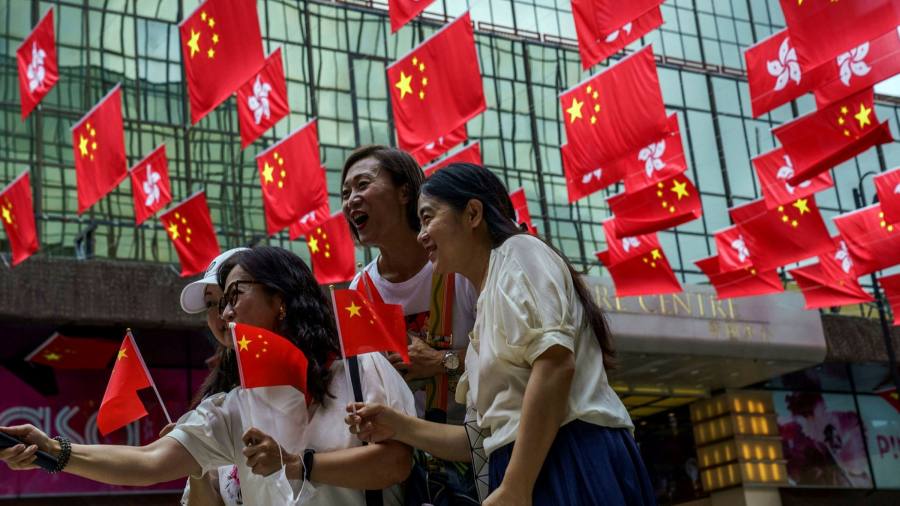 Sign up to myFT Daily Digest to be the first to know about Investing in funds news.

The FT fund has made reasonable progress this year. The decision to make the MSCI World Index the largest single holding in the portfolio of exchange traded funds (ETFs) has helped: amid volatile changes in sentiment, investors switched from wanting low-priced value stocks to seeing some of the longer-term benefits of the digital giants that are powering the main economic revolution of our age. This has made a sector-based strategy hazardous.

We had decided to keep out of any fund that invests in the main Chinese indices. This has paid off, as China’s cautious economic policy has combined with growing tensions between it and other countries to produce a poor performance so far in 2021. Preferring Taiwan to mainland China has given the fund a boost as Taiwan has been one of the best-performing stock markets over the past year.

Global investors still worry about inflation and stimulus worldwide. They also need to evaluate the impact of a growing nationalism that now stalks the economic universe.

This is an age of international conferences for the leading governments. The G7 and G20 groups of nations are busy trying to agree a global tax system for companies. Environmental meetings seek to impose detailed routes to net zero on countries, and to require commitments to protecting species and planting more trees. The trade negotiators remain busy seeking more agreements between the main trading countries and trading blocs.

It is as if globalisation sweeps on as it did before the pandemic. Many investors saw globalisation as a good thing for both the world economy and for their returns, as innovations spread quickly around the world and mega corporations invested and employed workers in every continent to raise living standards and pass on the latest goods and services. Investors hoped China would move on from joining the World Trade Organization to adopting more western approaches to conduct generally.

Today there are issues about how the negotiators translate good intentions into binding treaties, as nations remain reluctant to have their tax or environment policy under world control.

Beneath this apparently international and collaborative framework there is a darker world. The relations between China and the US, the two largest economies and military powers, have become very strained. President Donald Trump’s Make America Great Again has morphed into President Joe Biden’s plans to make more in America.

China presses on with its 2025 Made in China and Belt and Road Initiatives, seeking to provide most of what it needs from domestic sources and to widen its economic influence from a strong home base. Far from reducing tensions between the US and China, Biden has broadened the areas of strong disagreement by being more critical of China’s human rights record and the government of Hong Kong than his predecessor — topics where the Chinese are sensitive to criticism.

Increasingly the authorities do not just ask which is the cheapest and easiest solution, but which solution will reduce foreign and potentially hostile leverage over the home economy. The Chinese are busy building a larger deepwater fleet and air force, and regularly test the west’s resolve by flying and sailing close to Taiwan. They warn western navies against using international waters in the China Sea and seek to fortify and expand a series of islands and atolls to push out their territorial claims.

Both Russia and China allow regular cyber attacks on western computer systems and intellectual property. Russia has assumed a strong position in Syria and the wider Middle East as the US and Nato have reduced their troop presence.

Increasingly the authorities do not just ask which is the cheapest and easiest solution, but which solution will reduce foreign and potentially hostile leverage over the home economy

There is a sense on both sides that each great nation or alliance has to protect its own technology, secure its own food and raw material supplies and have its own set of friendly collaborating states that trade more intensively and receive aid and support from leaders in the group.

All this has a knock-on effect on markets. On both sides of the Atlantic there is a drive to block more mergers and takeovers involving Chinese capital. There is a strong move to onshore more production of everything from semiconductors to batteries and from food to energy.

Increasingly the authorities do not just ask which is the cheapest and easiest solution, but which solution will reduce foreign and potentially hostile leverage over the home economy. Businesses go along with this and will expect more subsidies, more preferential orders, some tariffs and more protection from takeovers as the price of assisting countries that are now more worried about national resilience.

Investors have to work out which countries, sectors and companies can benefit, and what will be the impact of less diversified supply chains and fewer contracts with the cheaper suppliers of the world.

Meanwhile China’s declaration of regulatory war on its own technology entrepreneurs and great companies has added to the woes of its bear market. As I feared, President Xi Jinping is now more preoccupied with control and power than with allowing free enterprise to help China catch or surpass US technological success.

Sir John Redwood is chief global strategist for Charles Stanley. The FT Fund is a dummy portfolio intended to demonstrate how investors can use a wide range of ETFs to gain exposure to global stock markets while keeping down the costs of investing. john.redwood@ft.com