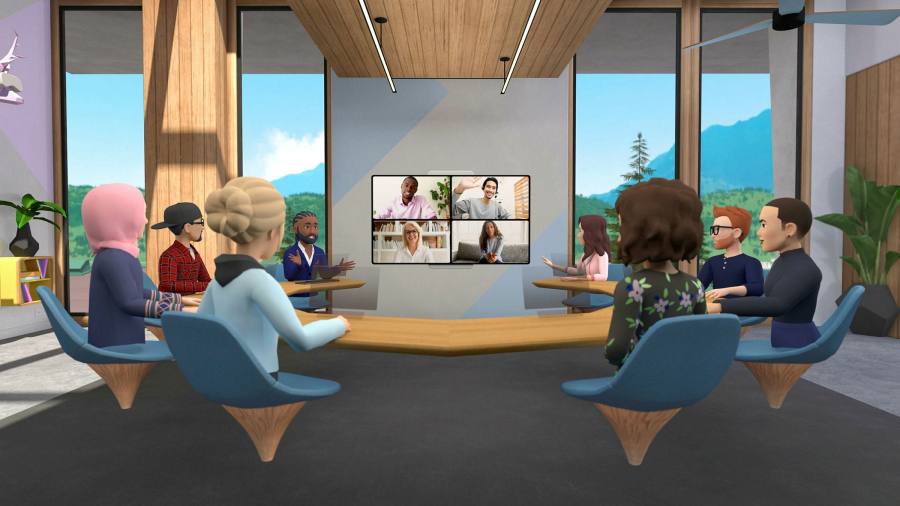 Sign up to myFT Daily Digest to be the first to know about Virtual and Augmented Reality news.

Fed up of staring at a Zoom screen after months of working from home? Facebook has an answer: virtual reality. Download a free app, don a $300 VR headset, and suddenly your co-workers, or at least avatars of them, are seated with you around a table. Their mouths move as they speak, their arms and hands gesticulate. “Spatial audio” means their voices come from different directions and sound louder when you turn to them. Participants can share their real computer screen, or work together on virtual white boards. Avatars are for now just heads and torsos — but who needs legs in the cyber-office?

This is Horizon Workrooms, unveiled by the social media titan this month as one of the earliest efforts to extend into the workplace the kind of VR environment many people will be familiar with only through gaming, if at all. Unfortunately, if this is the future, many office workers will be happy to live without it.

For one thing, users often find VR headsets are too heavy to wear for longer than half an hour or so; they can cause nausea, headaches or fatigue as the brain struggles to interpret the virtual world. And who wants to see colleagues turned into cartoonish avatars? The immersive experience, moreover, takes away one of the few benefits of Zoom: to be surreptitiously reading emails or scrolling through social media at the same time.

Then there is privacy: some businesses will have qualms over the idea of sound, body movements and shared content all going through Facebook’s servers (the company says images of the physical environment are processed locally on headsets). And what if Facebook decides to float ads into this virtual space? It says it has no plans to do so — but it said that about some other things it now does.

Facebook’s VR workspace is perhaps best understood as a demonstration of what is possible now — and might be in the future. It is a step towards the “metaverse”, or what Facebook founder Mark Zuckerberg sees as a permanent, shared digital space in which users, via their avatars, can do anything from taking part in dance classes to playing games or hanging out with friends, accessible from any device. The company is spending billions of dollars and has 10,000 staff working on aspects of this vision.

For now, however, the VR office fails to address the most immediate problem that many who eagerly anticipate the post-pandemic world of “hybrid” work, involving a mixture of office and homeworking, have yet to appreciate. Zoom-type applications function passably well when all participants are in remote locations. But when some are gathered in a meeting room, the opportunity to read body language and exchange glances gives them a subtle edge over remote workers, who may also struggle to be seen and heard. This risks being divisive — and becoming a new incentive for presenteeism.

Current VR technology that requires everyone to wear headsets is surely not the solution. Workers who have hauled themselves into the office precisely to engage face-to-face with other humans will not want to spend time wearing a heavy mask showing their teammates as cartoon images — which they could have done at home. If Facebook’s 10,000 techno-whizzes could come up with a quick fix for that conundrum, they would do all office workers a favour.