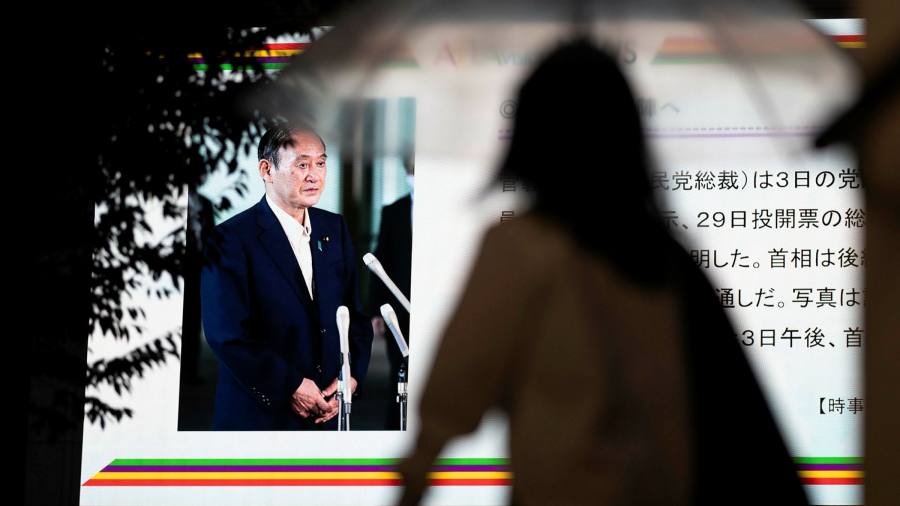 Sign up to myFT Daily Digest to be the first to know about Japan news.

Japan’s era of revolving-door leaders appears to have returned. Prime Minister Yoshihide Suga is checking out a year after taking the role — a tenure wracked by criticism of the way in which he handled the pandemic and the torturous on/off Olympics.

The stock market offered a perfunctory cheer, sending benchmark indices about 2 per cent higher. The Nikkei 225 is up 6 per cent in the past month, lifted by rumblings of a departure. The broader Topix hit a 30-year high. This has been seen as optimism that a new leader will commit to new stimulus plans.

Yet the share price rises can also be attributed to a strong earnings season, which ushered in a slew of upgrades and tempered valuations. Prices were already climbing to levels last seen before the financial crisis. The recent rise in JGB yields helps.

Expecting a new leader to effect a similar result means falling prey to the perennial triumph of hope over experience in Japan.

Suppose he (most likely he, although Sanae Takaichi has thrown her hat in the ring) delivers on the hoped-for stimulus. Suga was already set to unveil another heap of cash to invest. Any spending package would be on top of the headline $3tn of Covid spending already unleashed. These big numbers — bloated by government-prodded private sector spending — mean less to a nation that already runs one of the developed world’s biggest debt piles. Japan, famous for building bridges to nowhere, has not even managed to spend all its previous largesse: Y30.8tn ($280bn) was left over from the previous year’s budget, Reuters reports.

Japan Inc is geared for a comeback. Favourable fiscal policies mean many industrial and tech companies are increasing capital spending. The market has badly lagged behind those of other large economies. Japan’s protracted response to the pandemic theoretically leaves more room for recovery. A weaker yen helps the legions of exporters. But the ability to deliver will be linked only tangentially to Suga’s successor, whoever that may be.