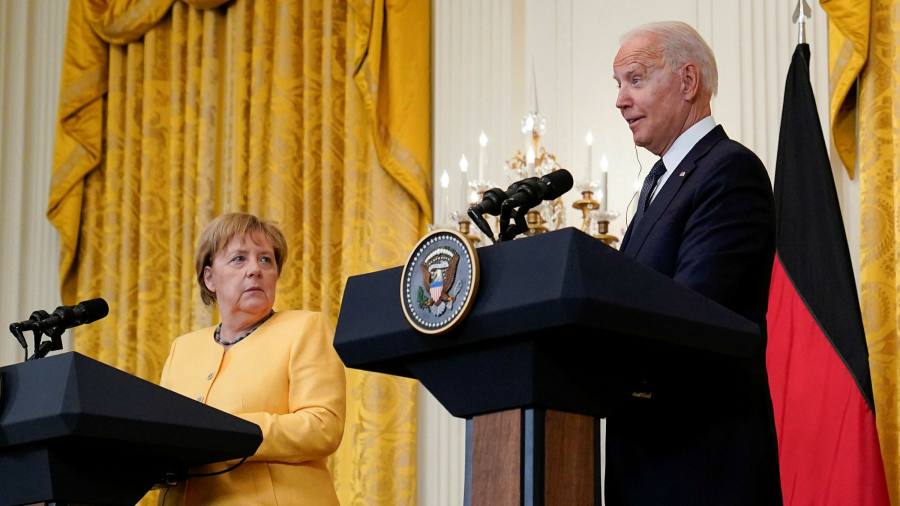 President Joe Biden will lose no votes over the EU’s decision on Monday to restore travel restrictions on Americans. But it is a bad sign.

The move was as much about Biden’s unwillingness to match Europe’s opening to US travellers this summer as it is about America’s high Delta variant infection rate. It would not have taken much to respond to Angela Merkel, the German chancellor, and others who pleaded with him to lift the ban. But it would have meant another battle with US anti-vaxxers. The fact that he refused to lift a finger says a lot about the EU’s lack of clout.

All of which is beginning to remind them of Donald Trump. At a stylistic level the difference between Biden and Trump could hardly be greater. Biden is engaging, he jokes with counterparts and usually says the right things. It is as hard to picture Biden shoving a foreign leader aside in a group photo-op as it is to imagine him launching a family-branded hotel chain. But being likeable is not the same as being a good ally. On that count, Europeans are starting to see continuities between Biden and Trump.

The most striking is that Biden does not much value their opinion, even if he seems to be listening. At times that can be deserved. Many European leaders have complained bitterly about the manner in which Biden pulled US military forces out of Afghanistan.

But in many cases, most notably President Emmanuel Macron of France, the criticisms rang hollow. France withdrew its forces from Afghanistan in 2014. Nevertheless, Afghanistan was one area where Biden stuck to Trump’s script. Those who still had boots on the ground, such as the UK, are angry at the lack of consultation.

It is not the first time Biden has blindsided Europe — and it can boomerang. In May, the president announced that he would ask for the suspension of global vaccine patents at the World Trade Organization. The move was bold and unexpected. But it was stillborn. It caught the Europeans by surprise and they killed it.

The conclusion is that Biden was offering a sop to America’s left to give the impression that he was taking on Big Pharma. His officials did none of the preparation with EU governments nor the follow-up to give the initiative any chance. Put it down to gimmickry.

The larger question is whether Biden thinks he needs Europe. His three declared priorities are Covid, climate and China. The transatlantic gulf over how to handle China is one of the untold stories of Biden’s first eight months in the White House. The US and its European allies have yet to forge a convincing common front on China and look unlikely to do so.

Europe’s chambers of commerce, particularly Germany’s, are in roughly the position America’s big business was in until a few years ago — lobbying strongly for continued access to the China market. There is little European support for decoupling with China other than on narrow areas of sensitive technology.

That is likely to remain true in the Indo-Pacific as it is in Europe. Most of America’s allies trade much more with China than they do with the US. Since Biden’s America is as allergic to trade deals, and even digital deals, as Trump’s, that is unlikely to change.

Biden’s overriding priority is to pass his domestic spending bills and win next year’s midterm elections. Doing economic deals with foreigners takes up too much bandwidth and could backfire domestically. That is likely to remain true as long as Biden is president.

Nor will there be big climate initiatives. The Biden administration has made great stock of the clean energy investments contained in the president’s $3.5tn budget bill. But there will be no carbon price, and no petrol tax increase, on his watch. That would break his pledge not to raise taxes on the middle class.

As a result, the COP26 climate change summit that the UK is due to host in November risks becoming a train wreck. The British government is touting pledges from the private sector — a familiar augury of political failure. Biden talks a big game on global warming but is not walking the walk. What he has proposed would not get the US close to fulfilling his goal of halving emissions by 2030. John Kerry, Biden’s climate envoy, is travelling the world urging countries to do the things America will not do.

Which leaves Covid. Both sides of the Atlantic are falling far short of pledges to end vaccine apartheid. Neither looks willing to redeem them in the near future. Here is one area where Europe and America’s goals and means are well matched. But their lack of political will is shared. In sum, “America is back”, whatever that means in practice. The west is certainly not.