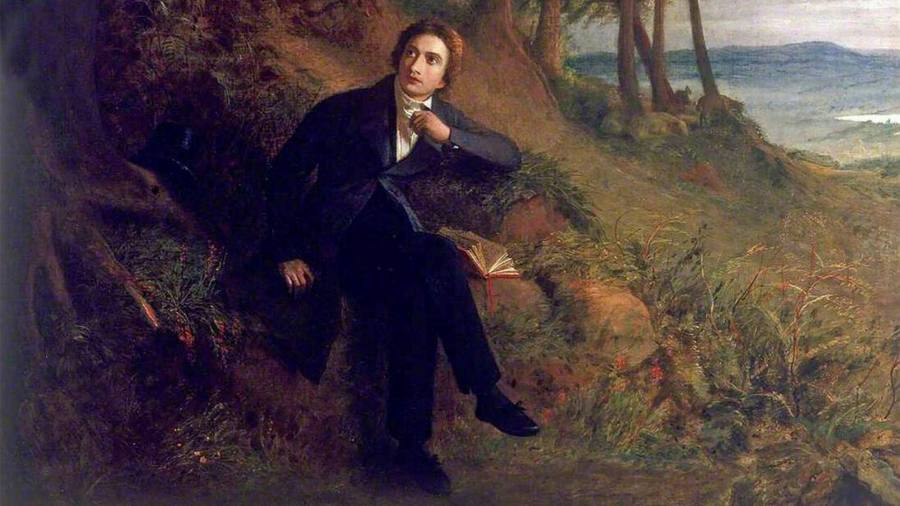 This year is the bicentenary of the death of the poet John Keats. Aged 25, he died in his room beside the Spanish Steps in Rome, killed, like his mother and his brother Tom before him, by tuberculosis. I have waited to pay him a bicentenary tribute until late summer shades into autumn, a season stamped by him.

In his honour, please reread his famous poem “To Autumn” and remember more than its “season of mists and mellow fruitfulness”. It combines imagination and observation and ends with the song of the robin “with treble soft”.

Keats is quite right. After robins have moulted they are one of the few birds in British gardens whose singing resumes in early September. They are not trying to attract a mate. They are defending their territories. Many listeners find it melancholic, a mood that inspired some of Keats’s best poetry, but not this one.

In February, Sir Bob Geldof, a bicentenary ambassador for the poet, described Keats’s poetry as “very sexy music”. I revere it for more than its sensuous language: its range of moods from dark to light, fire to ice, its imagination, its varied rhythms, its plays with time and its frequently professed ideal, beauty. I also read it with an eye for its flowers and landscapes. Was this supreme Romantic alert to flowers and gardens?

Keats’s father ran a livery stable for horses, what would now be a garage business. He had some money, as did his wife, though it became a legal tangle for her children. He sent Keats to a school in Enfield, run by the excellent John Clarke, where Keats learnt Greek and Latin and had to garden. Like my own first school, Clarke’s gave its boys small plots of ground as gardens.

I revere the poetry for more than its sensuous language: its range of moods from dark to light, fire to ice

Clarke’s son recalled a big cherry tree by the main house, a pond in which the boys learnt to swim and beside it, strawberry beds which the keener boys used to water. Under an arbour, he says, Keats sat reading the Elizabethan poet Spenser while nightingales used to sing in the hedge. That memory may be tinted with hindsight.

Later in life, Keats moved into what is now Keats House in Hampstead. It had a plum tree, another cherry, various flowers and for sure, a singing nightingale. Keats marvelled at its sound in the garden’s mulberry tree in spring 1818.

A Hampstead nightingale is the prototype for his superb ode to the bird in which, with his eyes shut, he guesses the flowers around him, violets and “mid-May’s eldest child, the coming musk rose”. Mid-May is far too early for buds on mine.

By the age of 16, he was training for a medical career. It involved him in the study of plants for drugs, another arrow in his alert mental quiver. However, his first, for me his finest, masterpiece is anything but scientific. Aged 22, he was writing his long mythical poem on Endymion, the gorgeous boy in Greek myth with whom the moon fell in love.

I am Endymion’s biggest fan, a poem ideally suited to someone with stamina and fancy who knows Greek myth. It is less suited to someone who only knows the very mountain in Turkey on which Endymion was caressed by the moon goddess.

In this amazing poem, 4,000 lines long, Keats worked in allusions to flowers, to “savory, latter-mint and columbines/ Cool parsley, basil sweet and sunny thyme” and to roses, honeysuckle and harebells. I have climbed mount Latmos just above the evocative little ancient town, now ruined, of Heraclea. Keats’s flowers on it owe more to gardens in Hampstead than to the gaps between Latmos’s huge boulders.

In April 1819 he wrote to his sister about buying bulbs in bud at a London nursery and also some fine potted heathers, which he sent her instead. His letters have been a delight in late semi-lockdown, being witty, fast moving and not always borne out by his poetry. In one he refers to double violets as the “princesses of flowers, and in a shower of rain, almost as fine as barley sugar drops are to a schoolboy’s tongue”. In his honour I have double violets in pots beside my front door, but they now need protecting from snails.

In his St Agnes Eve poem, the young visitor, Porphyro, enters into the dream of lovely Madeline, asleep before him, just as the rose blends its scent with the violet, “solution sweet”. Critics of the Geldof persuasion see sexual climax in this word “solution”. I see the dissolving of the essences of two flowers, as Keats would know from his medical training. They are merging sweetly on the way to making Chanel No 5.

Keats’s good friend Benjamin Robert Haydon describes how the “humming of the bees, the sight of a flower, the glitter of the sun seemed to make his nature tremble”. It is for two of these tremblings that I will commemorate him.

The festival is back and in person at Kenwood House (and online) on September 4 with our usual eclectic line-up of speakers and subjects. Speakers on the House & Home stage will include FT columnists Luke Edward Hall and Robin Lane Fox, among others. To book tickets, visit here

One is a fruit now in season, the nectarine. In September 1819 Keats writes to a friend that he is writing with one hand and with the other, holding to his mouth a nectarine, “good God how fine”. It “went down soft pulpy, slushy, oozy” and “melted down my throat like a large beatified strawberry”. Nectarines still do, though their price has inflated 80 per cent in my local greengrocers since 2019. Keats was eating the real thing, not a gas-cooled half-ripe cricket ball in netting, bought from a supermarket.

Critics effuse over this passing remark as if the pulpiness echoes the pulpy lips of a woman and so forth. Keats’s poems expatiate on luscious food, sometimes when lovers meet, but here he was simply eating a nectarine, just as I will when I have written this column.

I prefer his own fancy, not some of his critics’. If they explain his lush verses as suppressed sex, I feel, as CS Lewis well put it, after such a reduction, is that really all there is? Of course not. Addressing his lovely Fanny Brawne, Keats writes in his “Ode to Psyche” how he will make a rosy sanctuary that he will dress “with the wreath’d trellis of a working brain”. How beautifully put: such dressing is a mainstay of happy life. He will wreath it with all the gardener Fancy can contrive, who “breeding flowers, will never breed the same”.

Then in his poem to Fancy itself, he urges us to conjure up the flowers of other seasons at one and the same moment, daisies, marigolds, primroses and hyacinths, the “sapphire queen of the mid-May”. He is spot on nonetheless. Imagining flowers beyond the flowers of the moment multiplies the joys of gardening.

A year before his death, he wrote: “I muse with the greatest affection on every flower I have known from my infancy . . . it is because they are connected with the most thoughtless and happiest moments of our lives.” As for “foreign flowers in hot houses of the most beautiful nature”, he “did not care a straw” for them. In many gardeners, a garden of early life is embedded. Keats knew its intensity, as I found during death’s prequel, solo lockdown. It is a fundamental link to him after 200 years.

Video: A poem ‘To John’ Keats by Inua Ellams