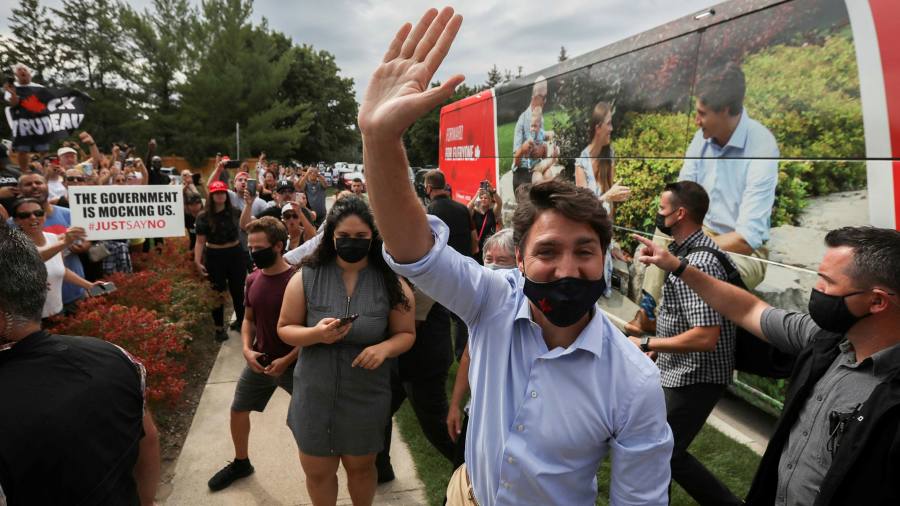 Sign up to myFT Daily Digest to be the first to know about Canada news.

Canada’s prime minister, Justin Trudeau, has pre-empted the country’s election schedule by two years, reckoning that a majority government is needed to “finish the fight” against the coronavirus. Things have not gone to plan. Since calling the snap election, the Liberal party that he leads in a minority government has slid down the polls, with the rival Conservatives even ahead in some.

At the halfway point, much is still to play for. But Trudeau’s miscalculation in pushing for a majority risks becoming a cautionary tale. It should warn incumbent leaders everywhere of assuming that having a decent Covid crisis will guarantee a further term of office. More pointedly, it underscores that the pandemic remains the touchstone issue for voters. At such a time, naked political calculation and calling an unnecessary election risks punishment at the polls.

Trudeau’s plan has a certain apparent logic: he has been able to frame the election as a referendum on his leadership in the pandemic. After a shaky start, his government has presided over one of the world’s most successful vaccination rollouts, and lavished Canadians with direct cash transfers.

There were other, more pragmatic, considerations behind Trudeau’s call: minority governments in Canada have tended to have a two-year shelf life. Better for the Liberals to aim for a majority now — which means increasing their current 155 seats to 170 — with a fair wind behind them if he is to push through an ambitious reform agenda. Second, Trudeau calculated that his main rivals, the Conservatives, were weak as the pandemic has limited the profile of their unassuming leader, Erin O’Toole.

But with a fourth wave of the coronavirus taking hold in Canada just as children are returning to school, voters are in no mood for a needless ballot. Trudeau called the snap election for September 20 last month, just two days after the government’s latest vaccine mandate, an inevitable point of contention during the campaign.

Trudeau has already made unforced errors, quipping that he did not think much about monetary policy. For the son of a prime minister, entrenched in the Canadian elite, to be perceived as not caring about everyday prices during a pandemic was a toe-curling faux pas. Trudeau also underestimated O’Toole, who has brought the Conservatives squarely to the centre ground, depriving the Liberals of a line of attack. O’Toole has abandoned fiscal conservatism in favour of promising generous spending, reckoning that voters have grown used to it.

Trudeau should not be written off. The past two elections have seen him perform best when under pressure. Most voters give little thought to elections until the televised debates, which move into high gear this week and play to his strengths. He is particularly strong in French-language debates — O’Toole is less eloquent — and Quebec is shaping up to be a key battleground. The Liberals have curried favour with Quebec’s voters through support for the province to become an official nation, plus generous funding pledges for day care, both of which could see the Liberals steal votes from the nationalist Bloc Québécois, the third-largest party.

Yet Trudeau’s biggest failure has been in convincing voters of the need for a snap election, which he should rectify swiftly. There was no evidence the minority government was not working, even during a health emergency. He may campaign on wanting to finish the fight against Covid-19 but with the pandemic not yet over this electoral fight carries the risk, at least, of finishing his premiership.