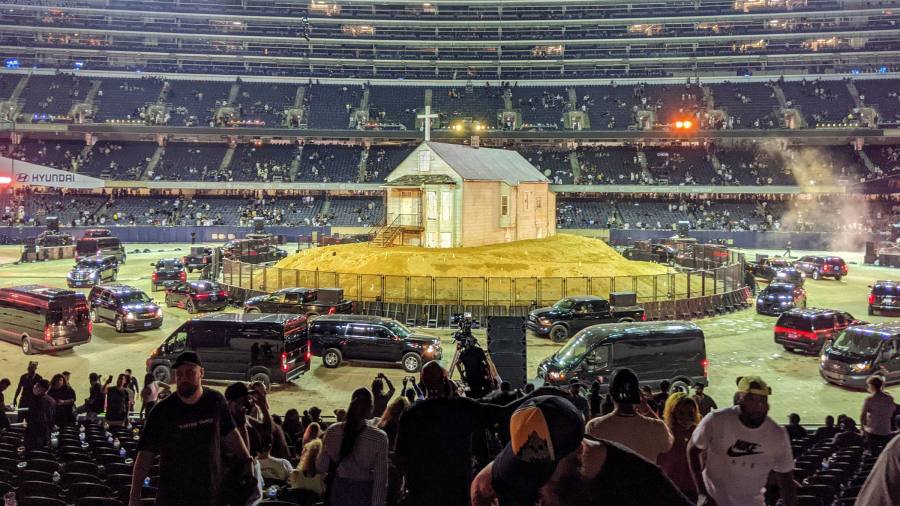 Sign up to myFT Daily Digest to be the first to know about Arts news.

Just over two weeks ago, on August 26, the musician Kanye West held a public listening party at Soldier Field stadium in Chicago. It was the third event where West sought to gather audience opinions and tweak his music in advance of the release of his 10th studio album, Donda. The album is named after Donda West, the rapper’s mother, who spent decades as a university English professor before giving it up to manage her son’s musical career. She died unexpectedly in 2007, a loss that seemed to set West deeply off his emotional kilter. The artist has continued to publicly mourn.

For the concert, West created what could easily be called an impressive piece of installation art: a life-size model of his childhood house in South Shore, Chicago. The three-storey structure, complete with front porch, was placed in the centre of the field on top of a large dirt hill. A large black fence surrounded the elevated house, and black trucks and SUVs circled the perimeter. Inside, the rooms were lit up, and on the roof, a large cross perched on the top of the gable. In West’s imagination this house, where his beloved mother raised him, remains a sacred place to be honoured, protected and celebrated. West bought the real-life house in 2018.

West’s actions feel like those of an emotionally distraught person longing for the place that gave him a sense of grounding, belonging and direction. Things everyone longs for regardless of social status, economic class and professional accomplishment. It’s hard to say what is being lifted up more at West’s event: the house or the memory of his mother. It is as though West conflates the two, to signify a solid nourishing home from which he could step out into the world, with both his troubling eccentricities and genius, aware that his sanctuary was always waiting. A defining element of which was lost in his mother’s death.

Kanye West is an enigmatic figure, widely recognised for his musical talent, his creative risks, and his often controversial and bewildering words and actions, from his 2018 comment suggesting that African-Americans chose to remain enslaved for 400 years, to his 2020 bid for the US presidency. But regardless of how unconventional and questionable West’s behaviour can be, or how good this new album may or may not be, this display of erecting this house and naming his album after his mother seems more poignant than perhaps his critics care to acknowledge.

Seeing the images of the replicated house online, while also hearing the news about flooding and tornadoes across the US, has kept me thinking about how destabilising and traumatic it must be when a person loses a home or a sense of home. None of us can say what the grief or mourning of that particular kind of loss looks like or how long it will last. But I think recognising this could shift, even just a little, the way we think about how we inhabit our own home spaces, and what happens when homes are lost for others.

In his recent body of work, The Desperate Journey and The Desperate Journey II, Ethiopian artist Tewodros Hagos creates powerful images of people at the most immediate end of having lost their homes. They are portraits of men and women, migrants who have just landed in new countries, still wearing their rescue blankets or life jackets. In some paintings the tumultuous sea serves as a backdrop, with overcrowded boats rocking perilously on the waters, but each piece seems to also capture a sense of an individual human’s range of emotions in the midst of such loss.

Based in Addis Ababa, Hagos was inspired by the media coverage of the ongoing migrant crisis to depict the people who feel compelled, for a variety of reasons, to leave their houses, countries, communities and loved ones. He felt the constant news about the crisis desensitised the public to the deep losses and tragedies people endure when they migrate.

In the haunting painting, “Journey (3) 2020”, a young person stands on rocky terrain at the very edge of the ocean. He is facing the empty, seemingly endless expanse of roaring sea as the waves crash at his feet. We see him from the side, draped in a shimmering metallic rescue blanket as he gazes into the stormy horizon. An almost palpable sense of isolation and displacement permeates the image. A viewer can’t imagine what fills the young man’s head and heart; what sounds or smells, voices or faces he is aching for, what feelings he is swamped by.

There is a tendency to think that displaced persons should count their blessings or be grateful for having reached new shores, for having been received as refugees or immigrants. Hagos’s images invite viewers to sit within the space of loss and grief and dislocation. It is a space in which to consider the homes that were left and lost. And to remember that to lose a home is also to lose the daily routines and habits enacted in that home, the routes travelled to and from that home, with all the conversations and encounters that tether a person to their identity. His work reminds me that to lose a home is like stepping to the edge of a vast sea that feels unchartable. Sometimes what we see as choice is another person’s only option.

Los Angeles-based artist Hilary Pecis paints vibrant, colourful scenes that represent the ways in which people live in their homes and create their environment. Her interior still lifes convey a sense of people’s lives through glimpses of the objects that fill their domestic spaces. Her canvases are often littered with stacks of books or records — all detailed with titles — empty glasses and dishes. Her work, “Adrianne’s Bookshelf, 2020”, is a painted rendition of the bookshelf of one of Pecis’s friends. The shelves are stacked with items representative of its owner: books, framed pictures and knick-knacks that bear memories or hold meaning. There is a small collection of glass vases with plant stems, a sign of life that requires human presence and nurturing.

The work is tender and intimate in that it considers the small objects that signify a particular life in a particular home. The big and little things we pick up or are given, which we use to mark the territory of our homes, to erect in some way little altars of meaning to our lives and our relationships. We often downplay these things as merely material objects, but the details of our homes, whether sparse or plentiful, represent our agency and ability to create our spaces in ways that suit us and nourish us. Both the ability to choose, and the chosen objects themselves, situate each of us within a particular ecosystem of meaning and connection and rootedness. Which is part of what gives each of us a sense of emotional and mental wellbeing.

Home is a complex and layered concept. To have one seems both a human right and a gift. To lose one seems a human tragedy, with rippling consequences. Pecis’s work is one small vibrant reminder to recognise and celebrate the homes we have, while we have them.