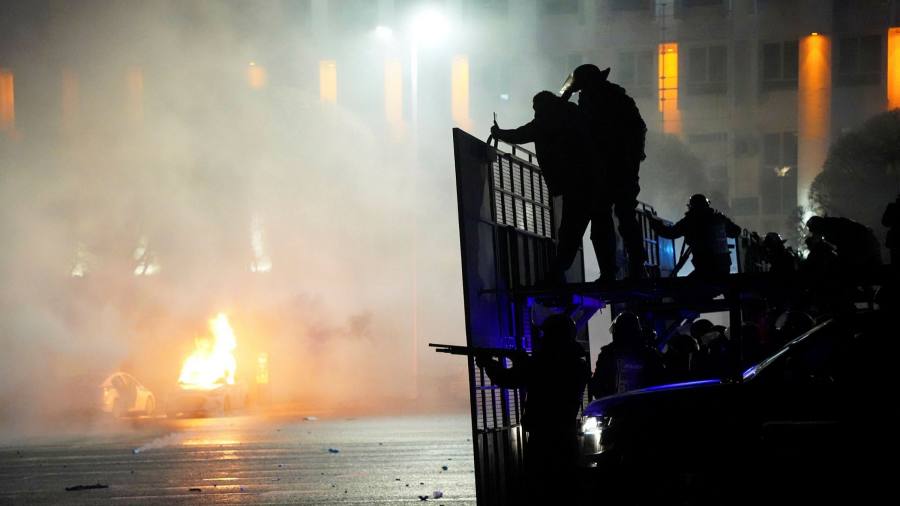 The best-performing frontier stock market of 2021 was Kazakhstan, up 81 per cent in US dollars. It outperformed even the industrialising favourite, Vietnam, which is seen by many as “China without the geopolitical risk”.

But the end-of-year celebrations will have left a nasty hangover last week as protests swept the country. The domestic market was closed but London-listed shares in the market’s top stock, the banking and fintech group Kaspi, fell 40 per cent in little more than 24 hours

Some might think this was one-off, that it caught out just a few investors in one esoteric market and has no broader significance. But I suspect the opposite is the case.

Let’s start with political risk arising from inflation. We have plenty of anecdotal evidence that inflation is both unpopular and potentially destabilising — from the storming of the Bastille in 1789 after Marie Antoinette dismissed food price rises as easily resolvable to last November’s election of the US Virginia governor that Democrat strategists claim was partly lost due to rising gasoline prices.

That does not necessarily mean regime changes. According to our analysis of the political impact of inflation in 162 countries since the 1950s, food price rises in themselves seldom lead to this. There is a greater correlation for regime change with recession and falling per capita gross domestic product.

That the Kazakh regime weathered this political storm was in line with our analysis that it would remain a “closed anocracy”, or semi-democracy. But Kazakh protests are unlikely to be a one-off.

Why did Kaspi fall so much? It’s not as if a few days of unrest would seriously dent revenues. Partly, because it was a thematic stock that had caught the attention of fintech investors globally. In December, the price was so high that you were paying the market cap equivalent of $1,300 per Kazakh, compared with $324 per Google customer.

These “tourist” investors were shocked to discover that a frontier market carries frontier-style risks. US protesters occupying the Capitol building for a few hours is one thing, but mass unrest and the burning of government buildings in a country most have never been to — that was quite another.

Despite such jolts, we believe there are thematic issues that are likely to attract global investors to frontier markets. If you’re wondering whether your next car will be electric or if you think nuclear has a key role to play in energy transition, then you might conclude producers of cobalt, copper and uranium will be in demand. Or perhaps an investor might be just long commodities in the belief this is a decent inflation hedge.

Each reason suggests that commodity exporters will be attracting more global money. And these exporters include Democratic Republic of Congo, Zambia, Peru and Chile, and of course Kazakhstan, as well as bigger emerging markets like Russia, Brazil and South Africa. All carry more risk than Australia or Canada. But in coming years, it won’t be just a few investors in one esoteric market; it will be all of us via our pension and mutual funds.

The other major reason Kazakh stocks fell when trading resumed, is because in the markets we cover, political change can often trigger ownership change. In the worst-case scenarios, minority investors can be largely wiped out — or as the proverb goes “when the elephants fight, the grass gets trampled”. The Kazakh government is probably too smart to let that happen. It has previously shown a record of reforms such as introducing a new stock exchange and divesting 25 per cent of Kazatomprom, the world’s largest uranium miner. Even the fuel price rise that triggered the protests was the result of an attempt to cut subsidies on LNG fuel. We think Kazakhstan should end up recovering well from this January shock. But it is understandable that investors took fright.

So Kazakhstan has (so far) confirmed our two political theses for the year: that inflation would trigger protests but that would not lead to changes in political systems.

We think the shock suffered by a few unfortunate investors this month is an experience many more fund managers can look forward to as money flows into the green economy. Last, we hope Kazakhstan can demonstrate that even when some shaking up of ownership structures does happen in an economy, it does so without deterring foreign investors.