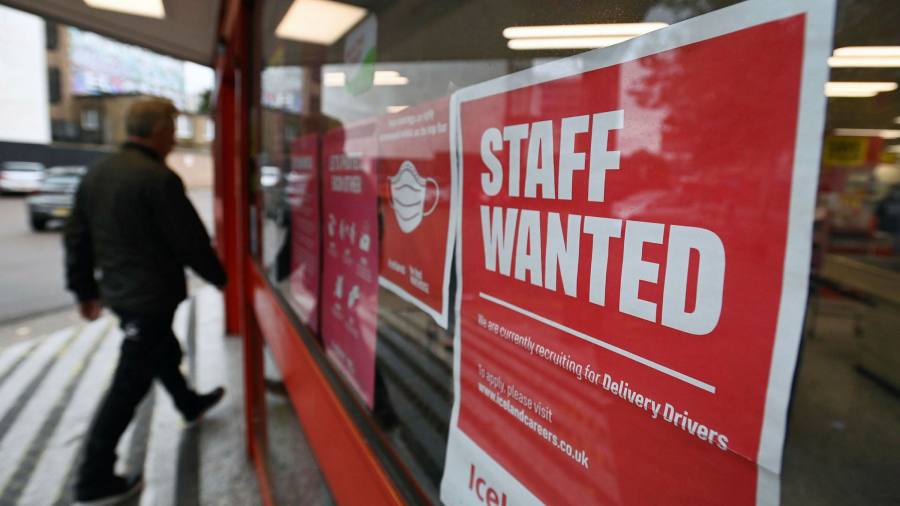 Sign up to myFT Daily Digest to be the first to know about Employment news.

Some aspects of a red-hot labour market are more visible than others. In the UK, the shortage of lorry drivers has deprived consumers of milkshakes at McDonald’s, chicken at Nando’s, and prosecco at the City Pub Group. In the US, it has left airports short of jet fuel.

In contrast, a tight market for bankers, lawyers and IT staff is only provoking moaning in the rarefied confines of C-suites.

Evidence of a rare reversal of capital’s dominance over labour will exacerbate investors’ fears of higher inflation. But the seriousness of labour shortages varies between sectors, with different implications for future costs.

The pandemic is the common factor. Emergency financings and a slew of M&A funded in part with resulting surplus capital is the reason white-collar staff are in strong, if selective, demand. London-based recruiter Hays reported a “dramatic recovery” in hiring on Thursday. Coronavirus is also the reason specialists in ecommerce software are getting fatter pay packages.

The switch to online shopping has left the logistics industry short of drivers with demand rising and tests for heavy goods vehicle licenses delayed. Brexit is another factor in the UK. An estimated 25,000 EU truckers have left Britain, says Logistics UK. That compares with an overall shortage of 90,000.

But the war for haulage talent has deeper roots. It reflects a market failure powerful customers are partly responsible for.

For years they have exerted grinding, cost-down pressures on logistics groups. Wincanton, a large UK company with economies of scale, has operating margins of just over 4 per cent. For a typical general haulier, the figure is only 1-2 per cent, according to the Road Haulage Association.

Pay is poor. Truck drivers’ median hourly pay has only risen by a tenth since 2015 to £11.80, compared with 16 per cent for all UK employees.

Law firms are offering sign-on bonuses of up to $250,000. Lorry drivers are being wooed with the same bounty, though typically worth 100 times less.

In both businesses, hours are gruelling and career paths uncertain. But lower pay means continuity of employment may loom larger for would-be truckers. Insecurity is exacerbated by industry plans for self-driving trucks.

In the UK and US truck drivers are mostly older men who are approaching retirement. If employers cannot offer new recruits a sustainable career, they will simply have to pay them more.