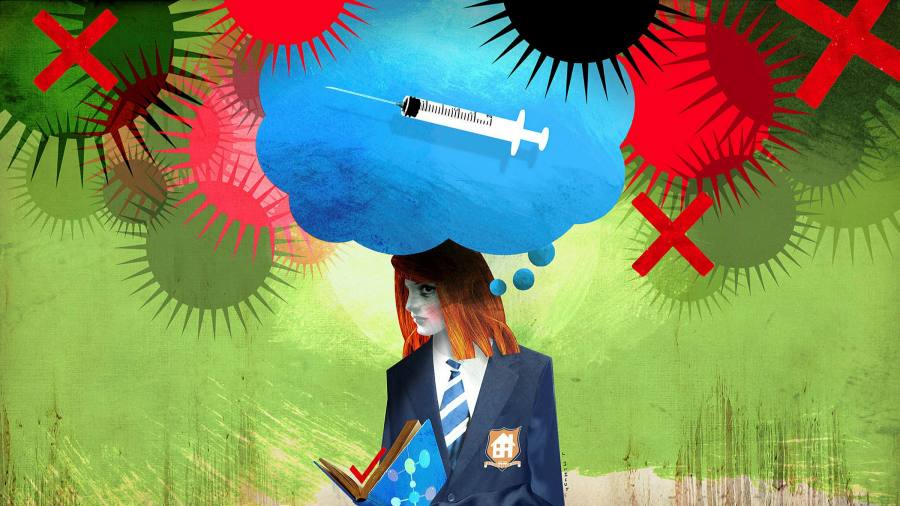 The writer, a former head of the Number 10 Policy Unit, is a Harvard senior fellow

At the start of term, I dutifully filled in the health forms sent by our children’s schools. These days, teachers can’t stick a plaster on our sons’ gashed knees without my signature. Sun cream is a minefield. So I was surprised to hear the vaccines minister declare that our 12-year-old will be making his own decision about whether to have the Pfizer jab.

Our son is pretty mature for his age. He plays a lot of chess, and can think several moves ahead. But I’m not sure why he is better placed to weigh up the pros and cons of getting this vaccine than the experts. Which scientific papers would the minister like him to read this weekend?

The government was infuriated by the Joint Committee on Vaccination and Immunisation’s refusal to recommend the mass vaccination of healthy 12 to 15-year-olds. The committee found these jabs would be of only marginal benefit, when setting the low risk of Covid-19 to healthy kids against uncertainties about the small risks of heart inflammation from mRNA vaccines.

It recommended — as did its German counterpart initially — that it would be better to roll the vaccine out to teenagers with underlying health conditions or vulnerable relatives. But ministers saw this as a missed opportunity to keep suppressing the virus. So they asked the chief medical officer (CMO) to look again and he came up with a brilliant wheeze: leave it to the kids.

I can think of no better way to stoke anti-vax sentiment than for government to deliver the kind of confused presentation that Professor Chris Whitty gave at Downing Street. I am very much pro-vaccine. But the longer it went on, the more outraged I felt. There is no difference between the JCVI’s position and that of the government, we were told, because the JCVI only considered medical issues, while the chief medical officers of the UK’s four regions have also considered — ta-da! — the health effects of another potential disruption to schooling.

I would have more sympathy for this sudden concern about children’s mental health if this wasn’t the same government that gave kids nightmares with its “look into my eyes” Covid-19 campaign. Which catastrophically disrupted their schooling, despite the fact that only 2 per cent of the teenagers who were forced to isolate for 10 days ever developed Covid-19. Which cancelled national exams for two years running and then caused havoc by knowingly stoking grade inflation.

Under the lamentable Gavin Williamson, the education department essentially relinquished responsibility to teachers, who had to assess grades and police testing. Now, it seems, the CMO wants to relinquish responsibility for jabs — to kids. Since 1985, British children under 16 have been able to consent to medical treatment without parental consent if they are deemed to be “Gillick competent”: if they can show they understand the consequences of treatment and are not under any pressure. But it is a mistake to use this provision to circumvent parental consent, since the long-term consequences are not yet clear, and the state is ever so gently hinting at closing schools again if kids don’t comply. This has set the stage for a furore.

It would be more honest to admit that there’s really no right or wrong decision when it comes to jabbing children. New safety data from the US suggests that most cases of heart inflammation are rare and mild, which has led the German committee to change its mind. But jabbing kids is not a panacea, since vaccinated people can still pass on the virus. Queueing up for vaccines will take time out of class — which was one of the JCVI’s concerns and, as they said, “any impact on transmission will be relatively small”.

Far more pressing is the continuing reluctance of some over 80s, ethnic minorities and up to 70,000 care workers to get vaccinated. These people are at much greater risk. Yet the government’s tone on children will only amplify their fears. Two years ago I was lecturing to public health doctors at Harvard Medical School. We started discussing vaccine resistance. One described his challenge in persuading patients to get jabbed as the toxic combination of “big pharma plus big state”. Pharma has been rehabilitated by life-saving Covid-19 vaccines. But if governments seem less than straight-talking on issues of science, they fuel distrust.

No other country has told kids to make up their own minds. In Greece, Denmark and the Netherlands, 12 to 15-year-olds are encouraged to have the jab, but parents decide. It’s the same in the US, except in a handful of school districts, which have made it mandatory.

Strangely, there’s been no debate about what will happen if a stroppy kid refuses the jab. Given that most kids hate needles, I’d have thought they’d be overjoyed to discover it’s their choice. Without parental bribery (usually in the form of ice cream, since the NHS “fun” stickers are despised) the whole thing could backfire.

This weekend I drove past a demonstration where a woman was holding up a placard claiming that more people have died from jabs than Covid-19. I resisted the urge to stop and argue with her, because my 12-year-old was in the front seat. After everything he’s had to put up with during the pandemic, I didn’t want to embroil him. The pressure of deciding whether to have a vaccine is a burden I really don’t want him to bear.