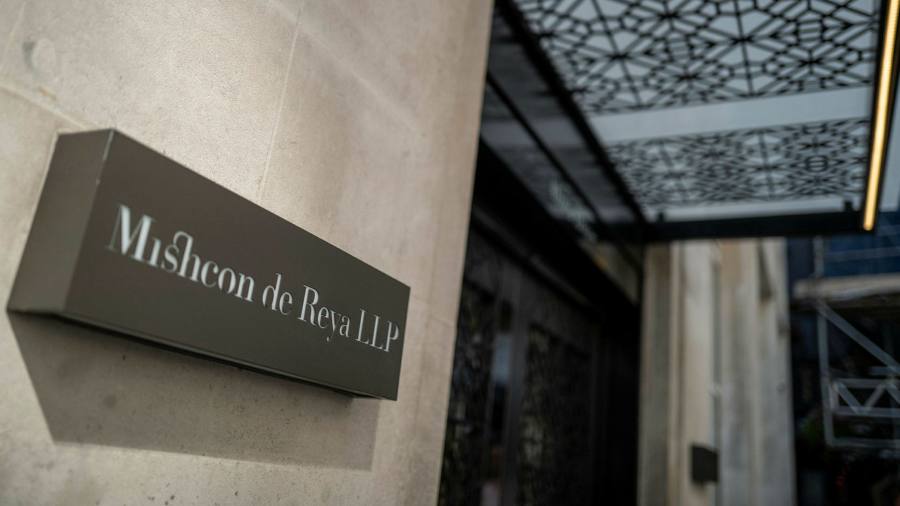 Sign up to myFT Daily Digest to be the first to know about Professional services news.

Profiting from others’ lawsuits makes some feel uneasy. Many countries still prohibit third parties from funding litigation in any way. The UK, for some time, has had no such qualms, allowing for a £2bn litigation-funding market to thrive. Mishcon de Reya, the London law firm known for its pugnacious litigators and big-ticket divorce cases, has taken the concept one step further and set up a £150m joint venture with one of the biggest third-party funders, Harbour, to back cases taken on by the firm. This raises questions about the management of potential conflicts of interest and whether the wider funding industry needs closer oversight.

Litigation funders — who typically provide a claim’s upfront financing and receive a multiple of those costs as a share of any payout — can provide access to a system that is otherwise expensive and loaded against the underdog: a system where the losing side must pay the other side’s legal costs can be a deterrent to those even with solid claims. The sheer expense of civil litigation — typically running from £2m to even get to trial — not to mention tactics that can draw out proceedings, mean the system is stacked in favour of the deep-pocketed.

In the absence of more structural reform, and of legal aid for most civil cases, third-party funding can provide welcome access to justice to those who otherwise could not afford the fight. A case in point was that of the dozens of sub-postmasters who had their wrongful convictions quashed earlier this year after what MPs have dubbed the biggest miscarriage of justice in recent times. The ruling that helped the sub-postmasters’ appeal was backed by Therium, another big funder.

Tightening the relationship between funder and firm only makes that more difficult, particularly when it comes to setting up a fund that will expressly back the firm’s own cases. Mishcon is also looking to publicly list by the end of the year, adding shareholders to the mix of groups to which it will have to give due regard. Another London law firm, Rosenblatt, whose listed parent group RBG also owns a litigation funder, Lionfish, has a prohibition on it funding any Rosenblatt case precisely to avoid potential conflicts.

Mishcon maintains its venture will be operationally separate, that regulations already permit firms to share in damages via conditional fee arrangements, and that clients will always be in control of their cases’ direction. But less sophisticated tie-ups may struggle to keep independent. That means greater oversight is needed.

Currently, litigation funders are unregulated. Some carry authorisation from the Financial Conduct Authority but not for the funding of litigation per se. The SRA, meanwhile, can take action against lawyers for failing to manage any kind of client conflict but its fines are capped at £2,000 — although it brings serious cases to a tribunal that has unlimited fining powers. Fines can rise to £250m for an “alternative business structure”, which allows third-party stakes in law firms. But a venture such as Mishcon and Harbour’s is not an ABS. Such patchy regulation coupled with fertile ground for conflicts adds up to a troubling outlook that needs more scrutiny.