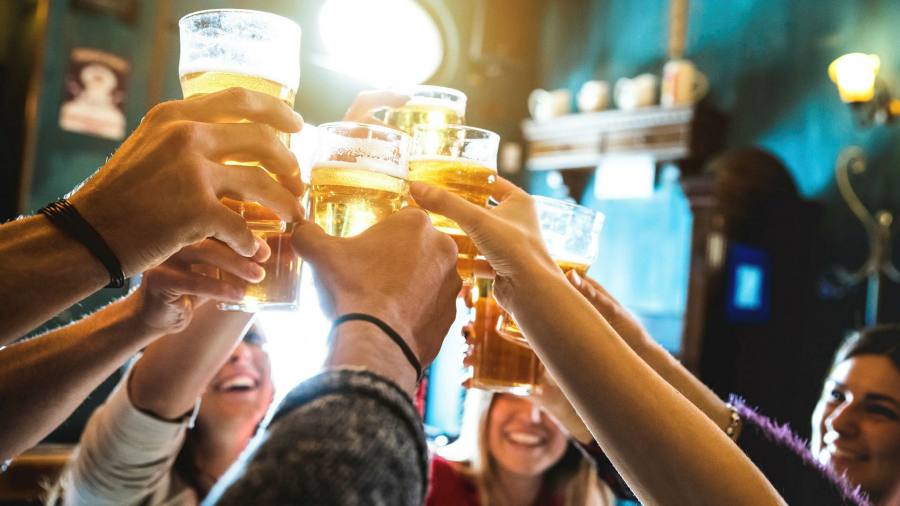 Sign up to myFT Daily Digest to be the first to know about Beer and spirits news.

The other night, I went to a party and got drunk. It was the kind of party I fantasised about in the dark winter days of lockdown. Friends! Dancing! Conversation! It was an exquisite giddy drunk, turning everyone into shimmering beauties and fantastic wits. Especially myself.

Unfortunately, what goes up must come down. The next day I was reminded of the hangover suffered by Kingsley Amis’s Lucky Jim in that my mouth felt like it “had been used as a latrine by some small creature of the night, and then as its mausoleum”.

Drunkenness wouldn’t normally be something I’d publicise to my employers, even if it was outside office hours. However, I am hardly the only one trying to navigate a renewed social life and its repercussions. After lockdown restrictions, I barely even know what counts as a celebration. Isn’t seeing pretty well anyone after so much time apart an occasion? Worse, I had no idea how to pace myself.

The pandemic has had a polarising effect on drinking in the UK. Last September, the Royal College of Psychiatrists warned that 8.4m people’s drinking was “higher risk”, up from 4.8m in February. Alcoholics Anonymous reported a dramatic rise in calls for help. Isolation, economic upheaval and uncertainty contributed.

Dru Jaeger, co-founder of Club Soda, which promotes mindful drinking, says: “The people who tended to drink more [were] emotional drinkers who deal with stress and worry [through alcohol]. Routine drinking also changed.” One measure became large, and maybe more.

For many social drinkers, however, alcohol use decreased. Which is ultimately what happened to me. At the start of lockdowns, like many overwhelmed by work, home-schooling and uncertainty of the new disease, I drank more regularly. A glass of wine became something to mark the end of the working day. We’d made it, another day done. But in the summer, I took stock and switched tack, so that exercise became a more sensible option. (I say this with the priggish smugness of a new convert.)

In this, I was assisted by the improvements in the no and low-alcohol (or nolo) drinks market which has vastly improved since I last ventured into it when pregnant a decade ago. After months of sampling new low-alcohol lagers such as Lucky Saint and Coast, I tried an old Becks Blue — a pregnancy tipple — at the back of the cupboard and was shocked at how vile it tasted.

My changing tastes were part of a broader trend. Stuart Elkington, founder of Dry Drinker, which sells alcohol-free drinks, says that the early part of the pandemic seemed to be an “alcohol amnesty” but after reappraising their habits, new customers wanted a tipple without the liver damage. Many are what he describes as “blenders” mixing alcohol and alcohol-free drinking. Last year, the company’s sales doubled, while in 2021 it has grown 30 per cent. Though a tiny proportion of the drinks market, making up just 3 per cent last year according to International Wine Spirit Research, alcohol-free sales are expected to increase by 31 per cent by 2024.

The Roaring Twenties were in part, an alcohol-soaked response to the end of the influenza pandemic and the first world war. No doubt many of us will do as I did and become overexcited in meeting friends and family again, yolo (you only live once) spending on booze. But this is also an opportunity to reappraise.

While much of the debate on the future of the office has unsurprisingly focused on productivity and the commute, many people are reassessing the broader environment, says Lauren Booker, a consultant at charity Alcohol Concern.

“I’ve heard from employees [who say] they don’t want to do wining and dining three times a week. It might change the boozy culture at work,” she adds.

Jaeger notes that in the UK, we imagine that the words “socialise” and “drink” are synonyms, but “when hospitality venues weren’t open, people went for walks and had picnics, there are lots of ways we have nurtured relationships without alcohol. There are lots of ways to connect and all those ways are open again.”

After all, just because the pub’s open, you don’t need to get wrecked.