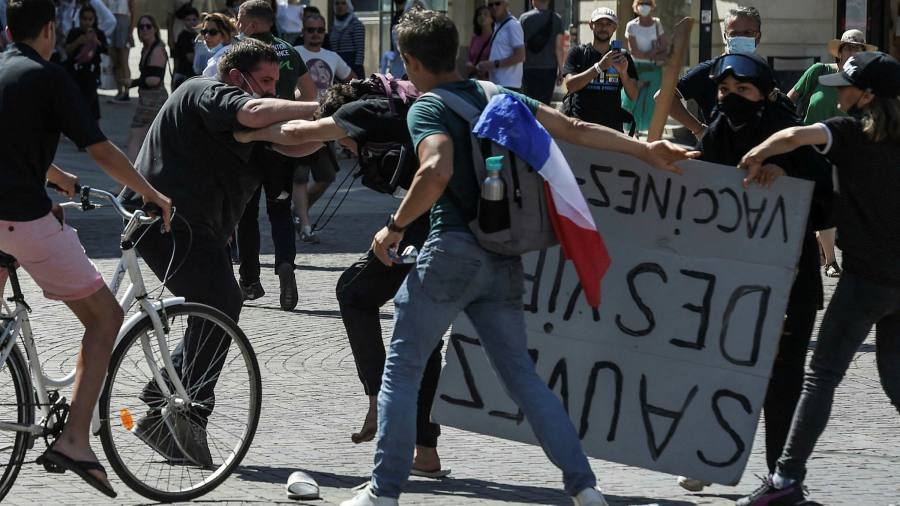 Sign up to myFT Daily Digest to be the first to know about French politics news.

The demonstrations in France against compulsory vaccination for healthcare workers and the requirement to show a Covid pass to access hospitality and cultural venues have gained in strength even through the sacrosanct summer holidays. They are drawing comparisons with the gilets jaunes or yellow vest movement of 2018 which turned into the biggest political crisis of Emmanuel Macron’s presidency and almost brought down his government. It required the abandonment of fuel tax rises and a lot of taxpayers’ money to appease his critics.

With eight months to go before the presidential election in which Macron will present himself as the political leader best able to unite the nation against a resurgent far-right, French people from all backgrounds are once again taking to the streets to defy him. This time, though, the president seems happy to take on his critics.

Macron has not become insensitive to opposition. Far from it. Last week, he ditched a plan the government announced only the previous day to introduce mandatory two-year safety checks for mopeds and motorbikes. The checks are required under EU law. But French motorcyclists are a noisy lobby willing to block roads to get their way. The gilets jaunes started off as a motorists’ campaign against rising fuel costs and lower speed limits. Best avoid provoking them. The president has also hesitated to re-engage his contentious overhaul of pensions put on hold last year.

France is not alone in resorting to some compulsion to sustain its vaccination campaign. Italy has introduced a Covid pass and Germans in local areas with high infection rates will also have to show proof of vaccination status or a negative test to access restaurants or museums. But neither Italy nor Germany has so far seen a public backlash. The German authorities avoided any mention of a Covid pass at all. Macron on the other hand has made it the centrepiece of his “summer vaccine mobilisation”, announcing the details himself in an address to the nation on July 12. Vaccinating all French people would be the only way back to normal life, he said.

Some anti-pass demonstrators accuse the president of instigating a “health dictatorship”. His response has been combative, describing the protesters as “tens of thousands of citizens who have taken leave of their senses” and noting, sarcastically that “with everything that I have learnt about how this virus works, I don’t think demonstrating against it is very effective”.

“I will yield nothing to their radical extremism,” he told Paris Match magazine.

Pieyre-Alexandre Anglade, spokesman for Macron’s party in the National Assembly, tweeted: “This movement combines all that is foul in our society: anti-semitisim, conspiracy theories, contesting science and democracy.” Like the gilets jaunes, many anti-pass campaigners are aligned with the far-left or far-right and show a similar antipathy to political and media elites, although there are ordinary families protesting too. The big difference is that they do not command the same public support as the yellow vests. Surveys by pollsters ELABE and Ifop show that only a third of French people appear to support the anti-pass voters. Even after several weeks of disruption and violence, the gilets jaunes movement still had the backing of the majority.

In 2018, many French people rejected what they saw as top-down decision-making by a technocratic elite. Now they are counting on it to save them from a fourth wave of infection. A majority have no problem with presenting the Covid pass even to access cafés and restaurants. It is strongly backed by centre-left and centre-right voters as well as Macron’s supporters — the coalition he must assemble for re-election next year. Indeed French public opinion has swung from vaccine scepticism to zeal: 61 per cent favour now compulsory jabs. Macron, meanwhile, is celebrating his success, pointing out that in the month since his speech, France’s vaccination rate has leapfrogged Germany’s and America’s. The anti-Covid pass protesters may not give up, but for Macron this is a fight with the street he can win.