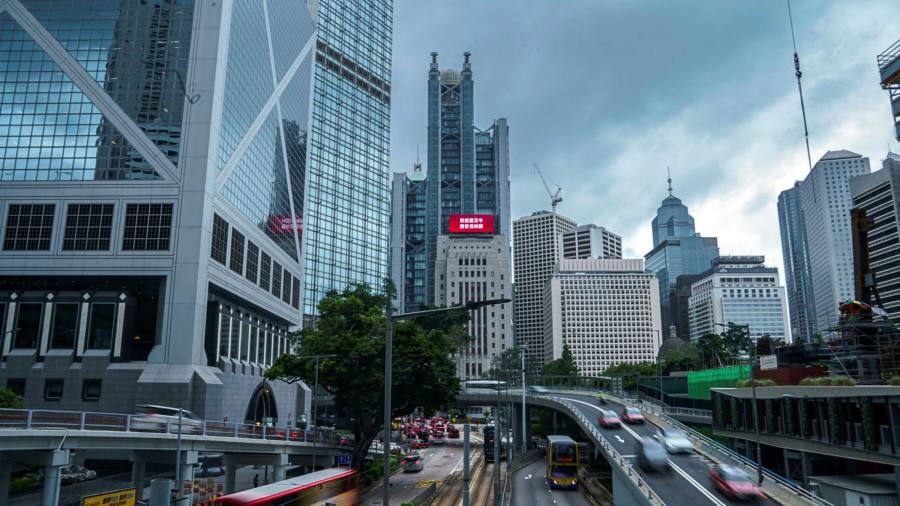 Sign up to myFT Daily Digest to be the first to know about Hong Kong news.

As tensions between the US and China have ratcheted up, multinational companies in Hong Kong have struggled not to stumble on the tricky diplomatic path of keeping both powers onside.

Now foreign businesses in Hong Kong fear that task is about to get much harder.

A new law aimed at punishing western companies which comply with US sanctions is likely to be extended this year to cover business based in the Asian financial hub, according to Chinese state media. This could leave companies wedged between complying with US regulations or getting sued in Chinese courts.

The earlier national security law, which China forced on Hong Kong in the middle of last year, was interpreted by some as banning banks from complying with US orders aimed at punishing China for its harsh response to the 2019 anti-government protests. However, Hong Kong prosecutors and regulators have not interpreted the law this way.

So far banks have closed the accounts of the handful of Hong Kong officials the US has sanctioned over Beijing’s tough political crackdown in the Chinese territory without much backlash from China. Senior executives have mostly been able to tell worried analysts on earnings calls they have a handle on the geopolitics and move on.

The US has also arguably held its fire, for fear of damaging its own companies and banks along the way or causing chaos in the global financial system. For example, no banks have been hit with secondary sanctions for still conducting transactions with sanctioned Hong Kong officials under a Trump-era law.

More recently, the Biden administration issued a business advisory which warned banks and companies about the dangers of doing business in Hong Kong. But it did not place any new legal obligations on them.

The new counter sanctions law, which Beijing passed in June, sketches out a broad legal framework which both bans companies and individuals from enforcing sanctions against Chinese companies and in turn allows those businesses affected to then sue western companies for compensation.

It also allows for counter measures against companies, executives and family members of executives such as the freezing of property and the cancellation of visas and the deportation of people from China.

Extending this to Hong Kong definitely could make things more complicated for business. “Anytime you see this type of regulation in a large complex money centre you obviously are going to see concerns,” says Daniel Tannebaum, a partner at Oliver Wyman.

Benjamin Kostrzewa, a sanctions expert at Hogan Lovells in Hong Kong. adds: “The new private right of action in the Chinese Ant-Foreign Sanction law certainly has a lot of companies nervous.” He says businesses should be actively examining their connections to any company that could potentially be sanctioned by the US.

But since Chinese law is often vaguely worded, companies will have to wait until they see any signs of enforcement before figuring out exactly how wedged they will be between the west and China. Companies in Hong Kong are not panicking yet.

“We would expect China to be pragmatic, more of a bark than a bite,” one bank executive said. “Many US companies have already implemented US sanctions, haven’t they, and we haven’t seen them sanctioned by China yet.”

Tannebaum said it was possible the law “might be some degree of statecraft” rather than something that will materially impact businesses. Certainly Hong Kong officials have made noises in recent days to attempt to calm international business by saying if China moves ahead with extending the law to Hong Kong, local legislation will have to be developed which could make its implementation more nuanced.

China could also be incentivised to enforce the law carefully in order to keep foreign investment flowing. “China will probably balance the broad language of the law with a narrower scope of enforcement,” Kostrzewa said.

Either way, western companies must be aware they are in uncharted waters. As the past few weeks have shown, China is much less hesitant to disrupt financial flows for both regulatory and political reasons.