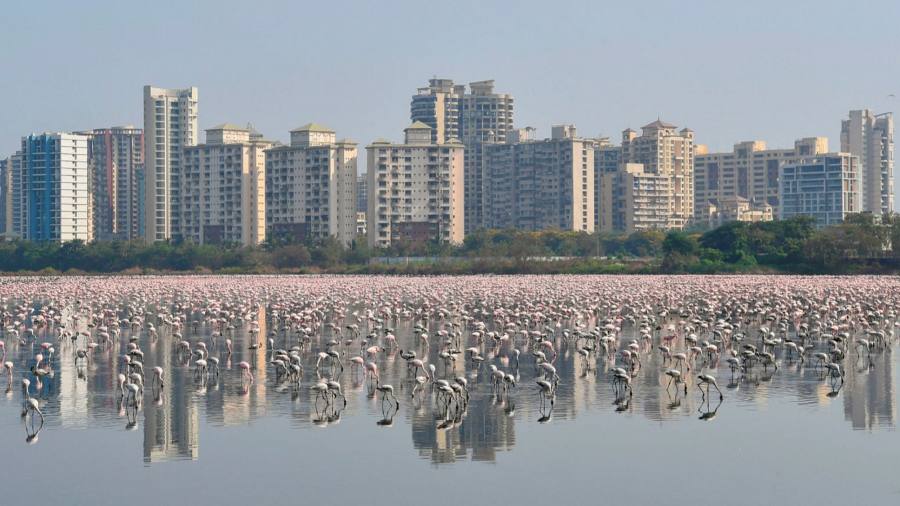 Thunch. An enormous brown bird crashed into metal bars crossing the lower living room window and clung on. The raptor was a black kite, a fierce-looking scavenger with large talons and a curved beak. I hoped it was not about to invite itself inside.

You might not expect close encounters with wildlife in India’s financial capital, Mumbai. For this very reason, when he planned to move to the city “everyone discouraged me,” says naturalist Bivash Pandav, who was appointed director of the Bombay Natural History Society in 2020. “But, believe me, the [first day] I came I fell in love with this city . . . no way is it impoverished in wildlife, it’s very rich.” Especially if you look up.

The sky above the world’s second most densely populated city whirls with house crows, blue rock pigeons and electric green parakeets. Elegant white egrets perch on boats docked by the fish market. At the coastline bordered by slums and mangroves, wading birds rootle about at low tide. Most spectacular of all are flocks of migrating pink flamingos.

For this wealth of birdlife, Mumbai can thank the “great natural heritage it was gifted with, between the coast [on the west] and the hilly forest on the east,” says Sunjoy Monga, author of books on Mumbai’s birds. “It was a very fertile, verdant part of India.”

No wonder that India’s most celebrated ornithologist, Salim Ali (1896-1987), also came from Mumbai.

The city’s expansion has gobbled up swaths of those grasslands and wetlands, severely curtailing bird habitats. But in urban areas, Monga says, successful species have piggybacked on human sprawl — crows that feed on rubbish, for example, or flamingos that seem drawn by algal blooms possibly caused by factory pollution. “There were no flamingos in Mumbai before the 1990s, or hardly any, and now suddenly Mumbai is the flamingo capital of the world,” Monga says.

I ponder the collision of human and animal worlds as I watch a dexterous kite dragging a loose electrical cable across a roof. Kites are particularly successful adaptors. “Wherever garbage dumps are, you find [them] like locusts,” says Pandav.

But not all species which have found symbiosis with humans have survived modernity. Take vultures, which once had a symbiotic relationship with Mumbai’s Parsees, an ancient Zoroastrian religious community. In Zoroastrian funeral rites, dead bodies are neither cremated nor buried, but left on a high structure to be stripped by birds in a “sky burial”. In Mumbai, the Parsee “tower of silence” is surrounded by woodland, an oasis in the city, where Monga says you can spy hornbills and wild pea fowl.

But for the past three decades, vultures have nearly disappeared across India, poisoned by an anti-inflammatory drug introduced in veterinary medicine. The birds’ disappearance forced age-old rituals to change. Parsees replaced vulture decomposition with mirrors used as solar concentrators. Pandav’s BNHS is running breeding programmes.

It is not only vultures that have vanished from Mumbai’s skies; Monga says larks have disappeared too. Other small birds are under pressure from traffic noise, which they expend too much energy having to shout over, and bullying crows.

Not all natural space has been sacrificed to development. There is a forested national park inside Mumbai’s suburban boundaries, which protects lakes that slake the city’s thirst and leopards. The big cats have been spotted prowling as far as the Indian Institute of Technology, alma mater of Twitter’s new CEO.

Yet conservationists are not complacent. Concerned Mumbaikars have campaigned against a proposed golf course and other developments that would erase vital wetlands. One stretch is being subleased by Reliance Industries, India’s biggest listed company, with the intention of creating a special economic zone for new city, Navi Mumbai. Campaigners have sued for protected status.

The kites have been displaced in my affection by the crow-fighting fantail: “a tiny bird, restless, frisky, an absolute dancer of Mumbai,” said Monga. “It’s thriving, able to survive against all odds, one could say.”