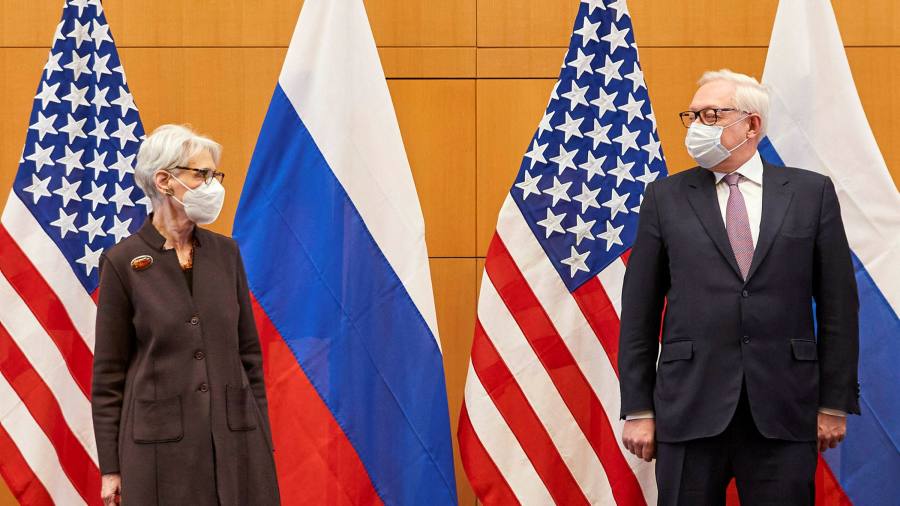 The author is a senior political scientist at the Rand Corporation

Monday’s US-Russia talks over the Ukraine crisis resolved little. Yet they did lay bare the core disagreement driving the most dangerous tensions in Europe in recent memory: the question of Ukraine’s aspirations to Nato membership.

After the meeting, Sergei Ryabkov, Russia’s chief negotiator, said it was essential that Ukraine “never, never, ever becomes a member of Nato”. Wendy Sherman, US deputy secretary of state, countered: “We will not allow anyone to slam closed Nato’s open door policy, which has always been central to the Nato alliance.”

The difference appears irreconcilable. After all, Nato’s founding document leaves open the option of inviting new members “in a position to . . . contribute to the security of the North Atlantic area”. For Nato, Russia’s demand as formulated is a non-starter.

But Nato has not invited Ukraine to join, and the allies have no intention of doing so. If it can defuse this crisis, the alliance should describe its actual policy, rather than continuing to joust with Moscow over abstract principles.

The dispute over Ukraine has a long vintage. As early as 1997, former Russian foreign minister Yevgeny Primakov told his counterparts that Nato’s admission of Ukraine would cross a “red line”. When Ukraine and Georgia’s membership bids began to seem more plausible in the 2000s, Russia’s opposition became more vocal. This created a vicious cycle. The louder Moscow protested, the more determined western capitals became to deny Russia what was seen as a veto over alliance decision-making. The issue was no longer the merits of Kyiv and Tbilisi’s bids for membership, but the perception that Russia could determine alliance policy.

Events reached a peak at Nato’s Bucharest summit in 2008. The George W Bush administration had been pushing hard to grant Ukraine and Georgia Membership Action Plans (MAPs), road maps to eventual accession. Germany and France believed that Ukraine and Georgia were not ready, but all allies wanted to avoid being seen as bowing to Russian pressure.

In an unusual compromise, allied leaders stated in a summit communiqué that Ukraine and Georgia “will become” Nato members — without saying when — but denied them MAPs. After the summit, it became clear that this declaration was the worst of all worlds. It provided no increased security to Ukraine and Georgia, but reinforced Moscow’s view that Nato was set on incorporating them.

Since Bucharest, the assertion that the two former Soviet republics “will become” members has calcified into Nato dogma, largely because Russia continues to reject it so stridently. Leaders reiterate it at every summit. But the reality is that Nato has no plan to offer membership to Ukraine or Georgia — or even grant them a MAP.

Nato cannot and should not accept being told what to do by Russia. But Moscow’s inflammatory rhetoric should not distract from the fact that Nato is not prepared to offer Ukraine membership. If doing so could avert a war, why not find some way to say out loud what any Nato official would say behind closed doors: that Ukraine’s membership in Nato is not being considered?

Some object that such a step would violate the principle of a state’s “right freely to choose its own security arrangements”. Yet even if Russia were not massing a huge force on Ukraine’s borders, it is disingenuous for Nato to insist on this principle while remaining unwilling to grant Kyiv its choice. Continuing to do so amid the present tensions does nothing to help Ukraine, and could make things worse.

Regardless, Nato would not be acting contrary to this principle if it were to declare that, while Ukraine is free to pursue membership, the alliance is not offering it membership at present. That is a factually accurate statement.

Such a declaration of restraint would not be unprecedented. In December 1996, Nato allies declared they had “no intention, no plan and no reason to deploy nuclear weapons on the territory of new members” — the so-called “three no’s”. This declaration was made before any of the new members joined the alliance. If it was acceptable for Nato to make such a commitment to self-restraint 25 years ago, it should be acceptable today.

A statement that the alliance has no intention to offer Ukraine membership at present should only be made in return for a tangible drawdown of Russian forces on the border. It concedes nothing to declare that Nato is not planning to do something it has no intention of doing anyway. If acknowledging this reality averts a conflict that might destroy Ukraine and destabilise Europe, that seems like a small price to pay.