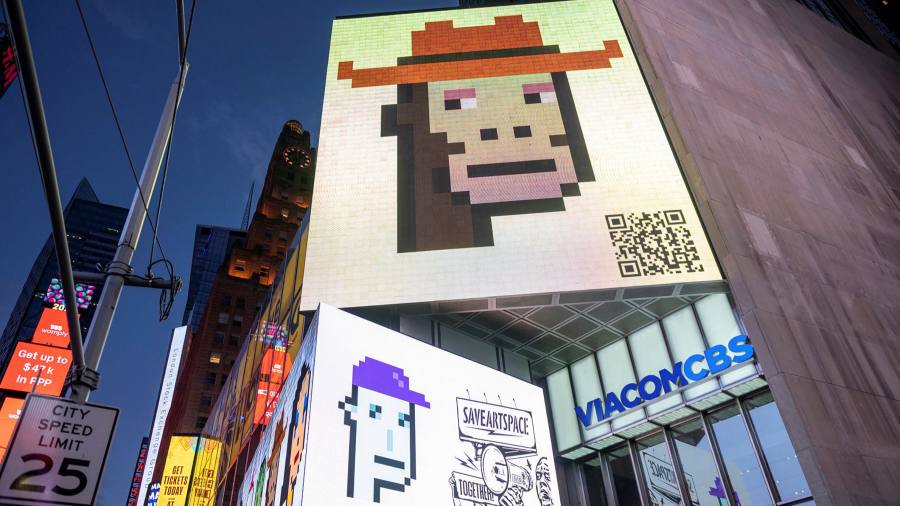 It has been another big week for NFTs, the digital collectibles that have captured the imagination of crypto enthusiasts and are now rapidly going mainstream.

Dolce & Gabbana unveiled a collection of dresses, suits, jackets, tiaras and crowns that can be worn by digital avatars and said it would sell them as NFTs, or “non-fungible tokens”, later this month.

Cryptopunks, a collection of 10,000 pixel art pictures of punks, passed $1bn in sales, with one sale last Saturday drawing attention after someone made a $1.23m profit by flipping a Cryptopunk within a few hours.

In Russia, the State Hermitage Museum raised more than $400,000 by selling NFTs of six works in its collection, including Leonardo da Vinci’s Madonna and Child, and Composition VI by Wassily Kandinsky. The museum noted it would get all the proceeds in cash, however, rather than cryptocurrencies as per “Russian rules”.

New NFT marketplaces are popping up, both from established crypto companies such as FTX, and from the likes of Rakuten and Alibaba, who dominate online shopping in Japan and China.

It is hard to pin down the exact driver of NFT mania, though the wider boom in cryptocurrencies has created a cohort of crypto millionaires and billionaires who believe in the promise of the blockchain and have money to bet on it.

They are speculating that NFTs, which are often pieces of art (such as a destroyed diamond, or a virtual perfume) but which also range from slices of virtual Manhattan real estate, to season tickets for sports clubs, to any number of real world assets, are a crossover product which will attract millions of ordinary people to the crypto world.

But the rise of NFTs, which are largely created on the Ethereum blockchain, also strengthens the case for Ethereum to become the plumbing of the “metaverse”, the parallel digital world that is this year’s trendiest tech idea.

The metaverse, a mirror reality in cyber space, has been interpreted in different ways. Many office workers, who have been largely connected to their peers by the internet since the start of the pandemic, might argue that it has already arrived.

In July, Mark Zuckerberg set out his plans for the metaverse, defining it as a 3D internet “where instead of viewing content, you are in it”. He promised Facebook would become a “metaverse company” through its virtual and augmented reality projects and has already launched a virtual office simulation.

But the idea of Big Tech colonising the metaverse and building the sort of lucrative walled gardens which currently dominate the internet provoked an immediate backlash.

Crypto enthusiasts define the metaverse as a collection of shared online worlds which are interoperable, so that users can move through them while carrying with them their digital identities, money and property. You might use the same avatar in multiple games, or even in Facebook’s virtual office.

To achieve this vision, there has to be a single ledger for all known items, a blockchain where everything can be recorded. And the blockchain that is in the clear lead in terms of its network effect is Ethereum.

Seen like this, the boom in NFTs is not just a speculative frenzy driven by memes or status but also a digital land grab, a race to conquer the commanding heights of the new digital landscape.

Of course the landscape is likely to evolve considerably. At the moment, many NFTs derive their value from being pegged to assets and services that are scarce in the real world, but the sector is evolving at lightning speed.

What are the risks? The first is an abundance of idealism. It is not clear how real world laws will interact with virtual worlds, how intellectual property and brands are protected, and who will police against theft and fraud. Bad actors are already pumping and dumping the price of NFTs. How long will it be before regulators wish to intervene?

A second obstacle is capitalism itself. The worlds that make up the metaverse have little financial incentive to create a utopia of shared goods, rather than promoting their own offerings. Why should a platform that has secured an exclusive virtual performance from one pop star allow people on other platforms to see it? Technology may enable an open metaverse, but the attraction of building mini empires will be hard to resist.