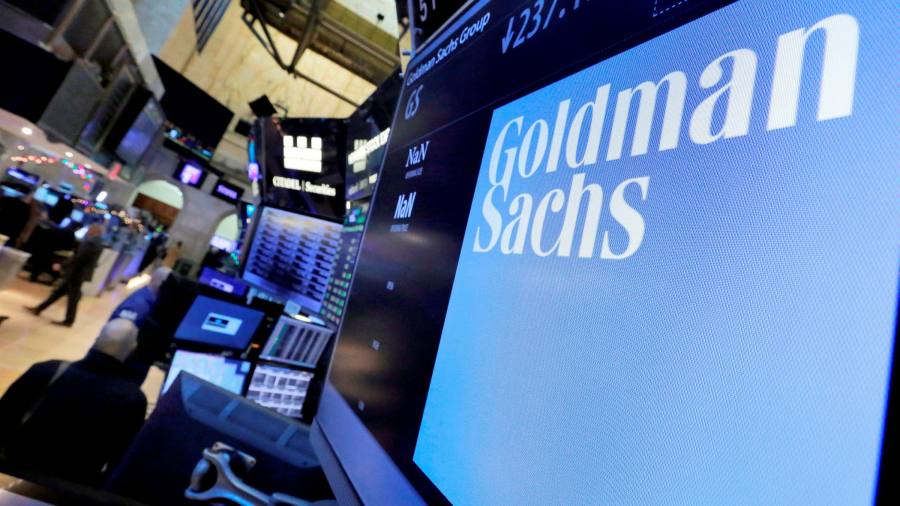 Which is the better bet? Should an investor buy shares in Goldman Sachs — market capitalisation $116bn and a global super-brand among investment banks — or Allied Irish Banks, one-fifteenth the size and still majority-owned by the Irish government after a humbling bailout 13 years ago?

Over the past year, there has been no question, at least in pure share price terms: Goldman stock is up a half-decent 20 per cent. That, though, is trounced by AIB’s 32 per cent gain. (It also falls short of the 28 per cent rise in the Dow Jones US banks index).

As the Irish government restarts its sell-down of AIB shares, the odds may favour AIB going forward, too. The Irish economy will grow by a further 5 per cent-plus this year, building on near-15 per cent GDP growth in 2021, according to EU forecasts. Even according to Goldman’s own optimistic outlook, the US economy will expand by only 3.8 per cent this year.

Add to that the relative market dominance: AIB commanded 40 per cent of the Irish market even before recent decisions by Ulster Bank and KBC to exit the country. For all Goldman’s chutzpah, it operates in fiercely competitive investment banking, asset management and retail banking sectors — and its dominant deals and trading operations may have reached a cyclical peak in 2021.

It is, admittedly, an odd comparison to be making. The two institutions are neither peers, nor even direct competitors. There is nonetheless one good reason to examine their relative fortunes. Goldman and AIB share a common pressure point: pay.

At Goldman the dilemma has been how to respond to inflationary pressures. In common with many other sectors, where worker shortages have pushed up pay levels, Wall Street banks found 2021 to be a high-cost year. Goldman topped the wage inflation leader board, with its pay bill ballooning by 33 per cent.

The fact that net revenue was also up by a similar amount made things look all right on the surface. The bank generated an impressive 23 per cent return on equity. But don’t be fooled. These were not great results. In particular the fourth-quarter net profit figure undershot expectations and was down 13 per cent on a year earlier. No wonder the shares slumped 7 per cent on the day.

Goldman has felt obliged to hike pay in order to dissuade staff from quitting for easier lives in technology or private equity. For many, investment banking looks less appealing post-pandemic given its demanding hours and the insistence that staff return to offices rather than work from home.

Investment banks have historically stressed the flexibility of their ultra-high pay outlay, given that much of it takes the form of performance-related variable bonuses. But the competitive labour market has forced up base salary levels too. Goldman does not disclose the ratio of fixed pay to bonuses, but there were clear indications of rampant salary inflation last year that will cement a higher fixed cost base at the peak of the market.

First, last summer there was a windfall for junior bankers. In common with rivals, Goldman increased salaries for first, second and third-year bankers by about 30 per cent to between $110,000 and $150,000. Insiders say there were also hikes for all ranks up to and including vice-presidents, with reports that salaries in some cases were doubled or tripled.

Then, at the top end of the bank, it emerged this month that Goldman was granting a special bonus for partners worth as much as several million dollars apiece.

AIB, meanwhile, has struggled to retain staff for a very different reason. Like other Irish banks with a government shareholding, it has faced two big restrictions on pay — an overall cap of €500,000 and a de facto ban on bonuses and other benefits. The restrictions are making it particularly hard for the bank to hire and retain staff in hot areas — risk, analytics, data management and internal audit — specialisms that are also crucial to prevent the kind of blow-up that led to the bank’s 2009 dice with death.

It is sometimes forgotten that Goldman, too, for all its bravado, also benefited both directly and indirectly from the US government’s rescue of the financial system in 2008. That never held back its payouts to staff. But the perceived preference shown to employees over shareholders is one of the reasons why it may continue to underperform even humbler names like AIB.