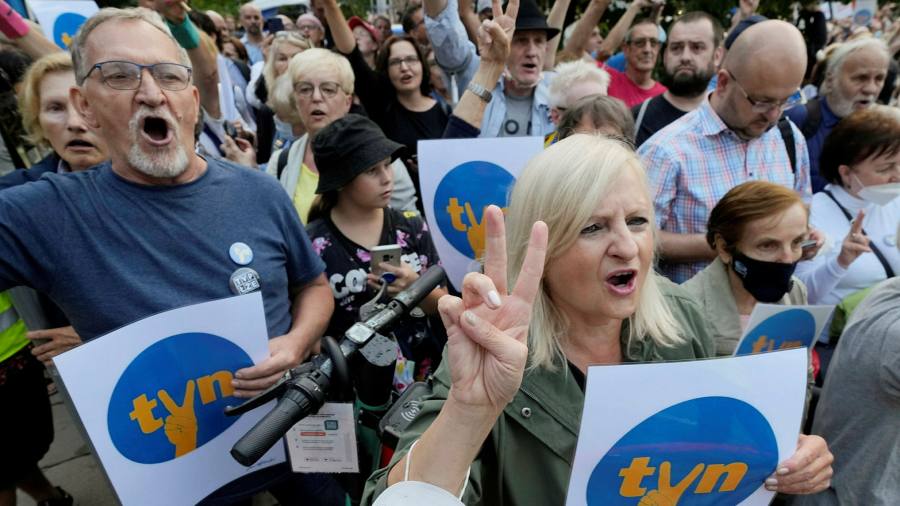 The rollback of democratic safeguards by Poland’s ruling Law and Justice (PiS) party has reached a new low. PiS and its allies last week passed an amendment to broadcasting laws that would bar companies that are majority-owned by entities from outside the European Economic Area from owning a controlling stake in Polish broadcasters. Nicknamed “Lex TVN”, the bill is widely seen as targeting TVN, owned by Discovery of the US — which provides news coverage that is often critical of the government.

The change is a further step to squeeze media freedom, echoing what has happened under Hungary’s populist-nationalist leader Viktor Orban. PiS has already reduced Poland’s public broadcaster to a crude propagandist for the government. A state-owned oil group has been used to buy up various local media outlets. Advertising from state bodies has been channelled to pliable media groups. Poland’s media watchdog is also dragging its feet on an 18-month-old application to renew the broadcasting licence of TVN’s main news channel, TVN24.

This matters. A takeover of TVN by pro-government owners would leave only the smaller Polsat as an independent source of national TV news, skewing the media environment ahead of a general election due in 2023. PiS is not as strong as it was. It can no longer rely on a consistent majority in Poland’s lower house after falling out with a coalition partner. Its popularity has slipped since draconian changes to abortion laws last year. The opposition is still fragmented but it has been given a boost by the return of Donald Tusk, the former premier and EU Council president. The attempt to secure a more malleable media environment seems hardly coincidental.

Once again, Poland’s EU and US partners are grappling with how to prevent Poland from being “lost” to liberal democracy. Pressure to date has had limited effect. Warsaw said this month it would amend a system for disciplining judges which the European Court of Justice ruled was against EU law; Brussels had threatened fines if it did not. But opponents fear the changes will still be cosmetic.

Brussels has less scope to respond to the media bill, for example by using the mechanism allowing it to block EU funds to countries that do not respect the rule of law. By allowing EEA ownership of media, the amendment seems structured not to contravene existing EU law. Vera Jourova, a European Commission vice-president, has suggested in response to “Lex TVN” that the EU needs a Media Freedom Act to uphold pluralism. But that is for the future.

The US has some moral influence. Even though it would be constrained from ever cutting its military presence in Poland by the risk of weakening Nato’s eastern flank, Washington should continually remind the PiS government of the security support Poland relies upon. It has applied pressure on some wayward allies in the past by withholding meetings with officials. Polish media have speculated that the White House might not invite Warsaw to the summit of democracies President Joe Biden plans for December.

Since Poland’s upper house may reject Lex TVN, forcing the lower house to hold a second vote, vocal EU and US criticism might yet peel away enough votes to prevent PiS from achieving another majority. If not, the damage to Poland’s investment climate could yet begin to weigh on its economy. Discovery plans legal action against Warsaw over alleged violations of a bilateral investment treaty. Its experience will serve as a cautionary tale. It would be a blow to PiS if investors turn their back as elections approach.