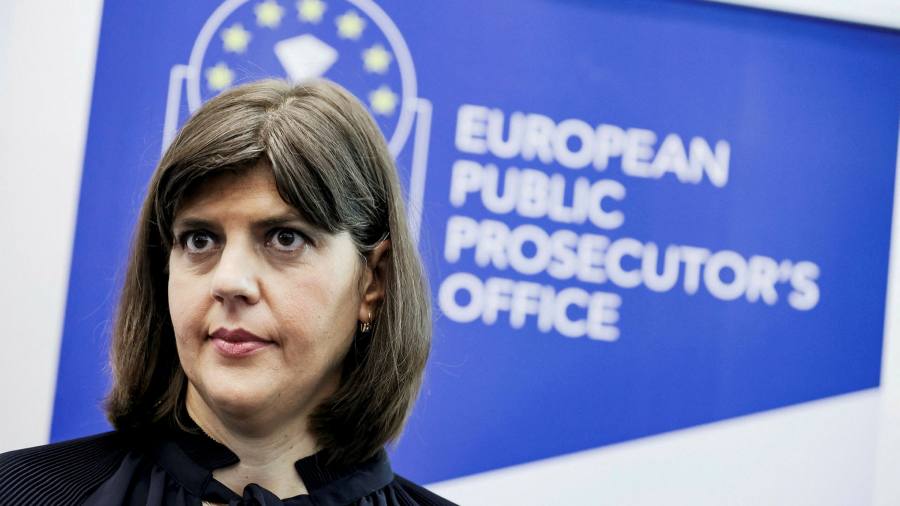 Sign up to myFT Daily Digest to be the first to know about European Union news.

In the three months since it opened, the European Public Prosecutor’s Office has processed more than 1,000 reports of possible fraud involving EU funds and projects. It is a speedy start to an audacious experiment in extending the EU’s system of supranational governance deep into the judicial sphere. But a start is all it is. The hardest work lies ahead.

Economic crime and corruption turned into a pressing issue for EU leaders in the 1990s and 2000s. Under the twin pressures of the bloc’s expanding membership and its evolving single market, EU budgets allocated ever larger sums to regional aid schemes and agricultural subsidies. But with the launch of the EU’s post-pandemic recovery fund, the need to protect the EU’s financial interests against crime has never been a higher priority.

The initiative, financed by common EU debt issuance, will make available up to €800bn in grants and loans to member states. Particularly in the wealthier countries of northern Europe, politicians and voters can be expected to react angrily to evidence of abuse of recovery fund money in other EU states. A guiding principle of EU policy — that richer societies lend a hand to the less well-off — would come under strain. Beyond that, EU integrationists’ cherished dream of turning the eurozone into a genuine fiscal and even political union might suffer irreparable damage.

Against this backdrop, the EU prosecutor’s office faces a daunting task. It is empowered to investigate and prosecute offences such as fraud relating to EU expenditures and revenues, bribes, misappropriation of EU funds by public officials, value added tax fraud and certain types of money laundering. Yet its annual budget is a paltry €44.9m, nowhere near enough to pay for all the financial investigators and analysts it needs. Small wonder that Laura Codruta Kovesi, who leads the prosecutor’s office, asks: “Do we want a kitten or do we want a tiger?”

No one should doubt that Kovesi, once an anti-corruption prosecutor in her native Romania, is the right woman for the job. But her agency’s thinly stretched resources create the risk that she and fellow prosecutors will be better at building cases against small fry rather than sophisticated criminals operating across national borders.

In mid-July her office drew attention to a corruption probe it has begun into four citizens of Croatia, including the mayor of Nova Gradiska, a town of 14,000 inhabitants. The sums involved in the alleged offences are estimated at €70,000 — a drop in the ocean compared with €461m in EU budget-related fraud that the European Commission reported for 2019.

The prosecutor’s office is not fighting an entirely lonely battle. It can draw on the support of the EU’s anti-fraud agency, known as Olaf, and national law enforcement authorities. However, the work of Kovesi and her colleagues is not made easier by the fact that five of the EU’s 27 countries — Denmark, Hungary, Ireland, Poland and Sweden — have not joined the prosecutor’s office.

The absence of Denmark and Ireland, which have opt-outs on EU judicial co-operation, and of Sweden, which promises to sign up soon, is not too worrying. A bigger concern is Hungary and Poland, which are locked in quarrels of their own with the EU over the rule of law. Another problem is the refusal of Janez Jansa, Slovenia’s rightwing populist premier, to approve the prosecutors that his country is supposed to delegate to Kovesi’s agency.

Tensions are foreseeable between the pan-European remit of the prosecutor’s office and the conception of national sovereignty dear to certain EU governments. One day an investigation may even unearth evidence of abuse of recovery fund money by politicians and their associates. Should that happen, it will be vital for the EU’s credibility that no political interference obstructs the prosecutors’ work.