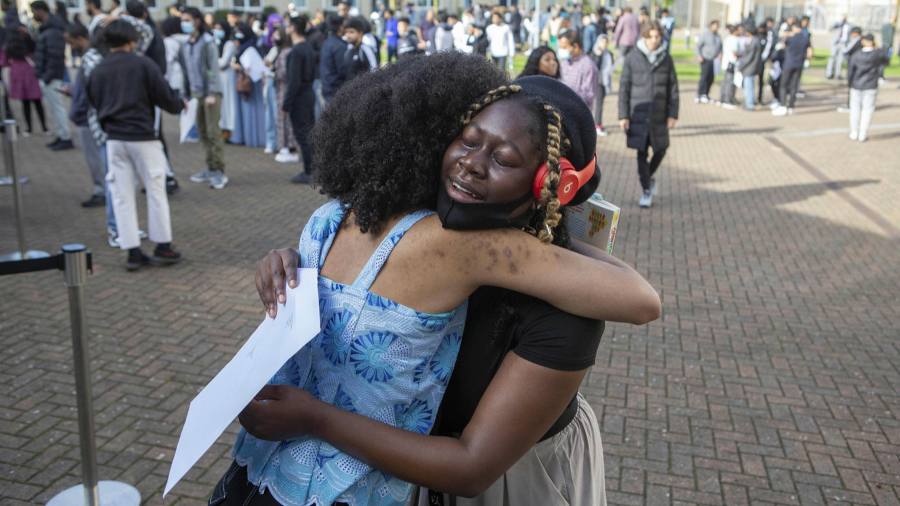 Sign up to myFT Daily Digest to be the first to know about UK schools news.

Completing secondary school during a global pandemic is an achievement in itself. This year’s cohort of students in Britain faced unprecedented pressures, including long periods of school closures at short notice and adapting to digital schooling. No matter what A-level results they received in England, Wales and Northern Ireland — or Highers results in Scotland — they have good reason to be proud of this capstone to their school life.

UK governments, however, deserve less praise for how they have handled grades; education is the province of Westminster in England, but of devolved governments in Scotland, Northern Ireland and Wales. They have at least avoided repeating last year’s farce in England — and a similar one in Scotland — when an algorithm designed to “moderate” teachers’ predicted grades disproportionately downgraded results from state-school students. That risked applicants missing out on university places for reasons beyond their control, until governments backtracked and accepted teacher predictions.

England’s decision to accept teachers’ assessments this year, with checking by exam boards, will have left fewer students disappointed overall. But it led to significant grade inflation. Almost 45 per cent of pupils achieved A or A* results, up from about 25 per cent in 2019. Private schools were still advantaged: grades went up the most among fee-paying institutions. While last year’s mistakes may be excusable given exams had to be cancelled at short notice, this year the need for contingency planning was clear. Failing to come up with a standardised method of assessment — schools used a mixture of approaches including past papers, classwork and newly-created tests — will still leave some students questioning the fairness of the process.

Grade inflation has also occurred in Scotland, which released its national results breakdown on Tuesday; students received their individual grades earlier. The Holyrood government also relied on assessments carried out by teachers. Some 47.6 per cent of Higher candidates achieved an A grade, against 28.3 per cent in 2019. Such a high proportion of students receiving top grades, across the UK, makes them less useful for businesses and universities to identify the best-performing candidates.

Truly comparable results would have been impossible, even had this year’s cohort sat the usual exams. With fewer teaching hours and disrupted lessons, grading on the same curve as previous years would surely have produced lower results. Pupils from disadvantaged backgrounds would have come out worst.

Nevertheless, this year’s results create problems for the future. Britain’s universities, unlike many in Europe, make advance offers based on “predicted” grades, not what students actually achieve. This year, fewer pupils will miss grades offered by their preferred universities and have to take their “insurance” choices. Some courses will be oversubscribed; others may struggle to fill places. Universities are obliged to accept anyone who meets their offer but resources will be stretched.

Oversubscribed universities are likely to encourage students to defer places for a year. Next year’s school-leavers — who may return to sitting exams — will find some places on popular courses pre-filled. Education authorities will also have to figure out how to return grades to more historically “normal” proportions in the future. Businesses and universities will just have to bear in mind, when evaluating candidates, what an extraordinary year the previous one has been.