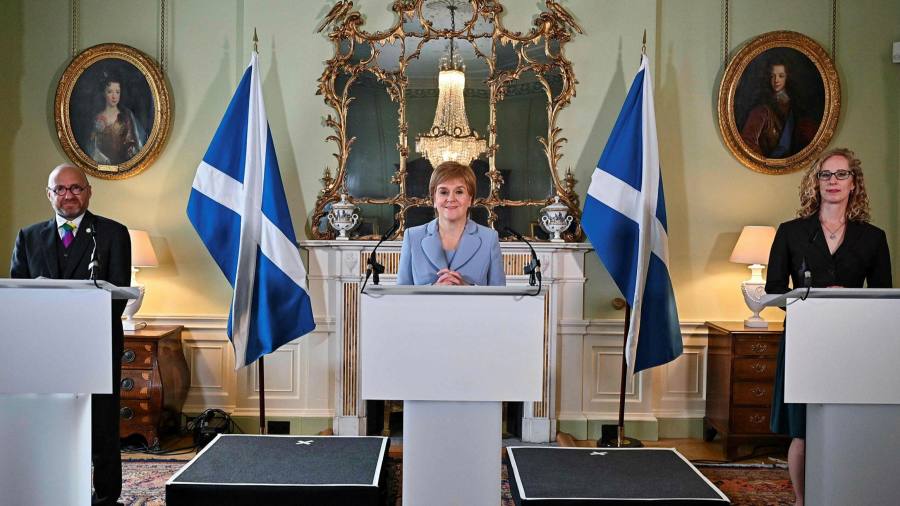 Sign up to myFT Daily Digest to be the first to know about Scotland news.

Nicola Sturgeon is full of surprises. There was no necessity for Scotland’s first minister to take the groundbreaking step of adding two Green party ministers to her government this week. Her Scottish National party failed to win an outright majority in the Scottish election in May, but nor did it do so in the previous election in 2016. It carried on governing regardless, giving every appearance of having perfected the art of secure minority government.

The Green move may bolster Sturgeon’s quest for an independent Scotland. Forging a power-sharing agreement with the Greens, who also support independence, could inject a sense of vigour in a party that has been in power since 2007 and whose government has begun to show signs of age. The question of what it means for the Greens, and broader efforts to cement environmental policies in the political mainstream, is more complicated.

The Scottish Greens’ co-leaders, Patrick Harvie and Lorna Slater, have made history by becoming the first Green party ministers in any UK government. Yet neither is in cabinet, which raises questions about how effectively they will be able to deliver on the zero-carbon buildings, green skills and circular economy measures for which they are now responsible. The Scottish Greens will also need to understand better the importance of supporting business to pursue their climate and environmental goals.

They have entered an arrangement similar to the pact that Jacinda Ardern, New Zealand’s Labour party prime minister, agreed with the Green party after her landslide election victory last October. She also made two Green party co-leaders ministers, but not Cabinet members, and like Sturgeon entered a looser co-operation agreement rather than a formal coalition.

If New Zealand and Scotland end up with governments that bear the lustre of green politics but deliver little of concrete value it will be a shame. Mainstream parties of all stripes have struggled to deal with the profound threat of climate change. Adding ministers immersed in the complexities of climate policymaking is welcome. Green politicians, meanwhile, have too often lacked experience with the rigours of political office, a necessary ingredient if their ideas are ever to become reality.

In Europe, momentum is growing. Green parties have been part of national governments in several countries including Finland, Sweden and Austria. In Germany, where voters head to the polls on September 26, the Green leader, Annalena Baerbock, has shaken up the race to succeed Angela Merkel by making the party’s first run for the chancellery.

After a strong start, the Greens have lost support and are now in third place in polling, behind Merkel’s centre-right CDU-CSU bloc and the centre-left Social Democrats. But the Greens could still be part of a new coalition government in the EU’s largest economy.

Should this happen, it would be a serious advance. Yet a more impressive model for promoting green measures may be taking shape elsewhere — in Washington DC. President Joe Biden vowed to embed climate policy across his administration. His agenda is a work in progress, but some headway has been made. Climate-knowledgeable leaders have been appointed to run critical agencies. The focus of domestic and foreign policy has been clearly tilted towards cutting emissions.

Different political systems will inevitably find different ways to meet rising demand to address environmental problems, especially climate change. They are welcome. Scotland’s version may not prove to be the best, but it is very unlikely to be the last.