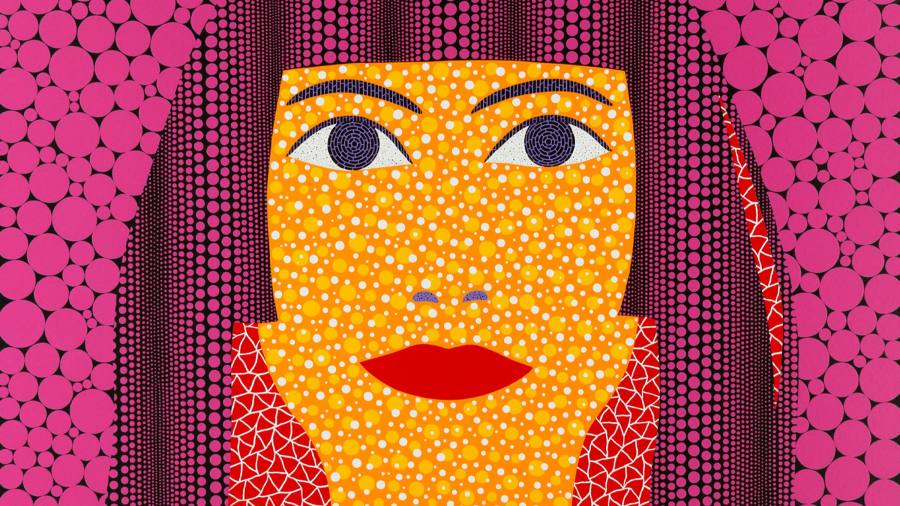 These days, even if you’re one of those people still tentative about returning to regular daily life, social media are a constant reminder that the world is opening back up, and that others are starting to document their way through the world once again.

Alongside the customary restaurant table shots — of which, I admit, I too am guilty — I see more and more images of the human form: faces caught smiling into the sunlight or with bouquets of vibrant flowers. People are taking self-portraits, embracing the world again and claiming their place in it.

It has got me thinking about how we use self-portraits — which is essentially what selfies are, regardless of how one might judge their artistic quality. Throughout its long history, the self-portrait has been used as a tool to tell stories and suggest narratives about who we think we are, who we desire to be, how we want others to perceive us, and how we understand ourselves in relation to the environments in which we find ourselves at any given time.

The form became increasingly popular in the mid-15th century, with the use of panel painting on flat wooden surfaces well underway. This, coupled with a philosophical shift towards humanism, served as encouragement for artists to take more liberties in putting themselves at the centre of their own work.

Self-portraits were and remain a way to try to shape a narrative of oneself in the world. Looking at the photographs on social media, and even reflecting on the images I choose to share of my sandal-clad feet in places around the city, or of my hands arranging or clutching flowers, I recognise that the decisions we make about what to include or exclude in our images all say something significant about our sense of identity.

In Huang Yan’s photo lithograph “Self-Portrait 2008”, the Beijing-based multimedia artist presents himself with his face painted with pink and crimson peonies and green and brown leaves on his face, neck and shoulders. Peonies have long been a revered flower in Chinese civilisation, used by artists to symbolise wealth, honour and feminine beauty. By painting images of nature on his body, Huang is able to express his desire for an identity that allows room for tradition and heritage as well as modernity. 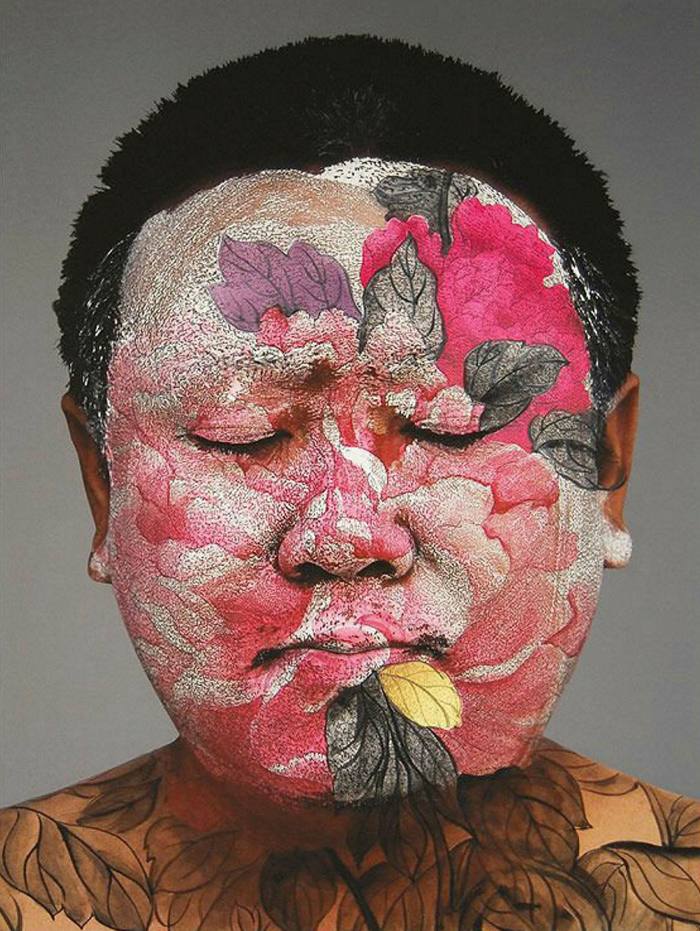 To use the human body as a canvas, as Huang does in much of his art, is a way of claiming respectability for the naked body as a part of the self, and also speaks to an identity that recognises itself as one with the natural world. Observing this image at a time in history when we’re caught in an environmental crisis, and from the vantage point of a western culture in which we are primarily raised in individualistic societies, Huang’s self-portrait is thought-provoking in the way it speaks of his communal heritage and in its artistic embodiment of nature.

Sheng Qi is a London-based Chinese artist, whose self-portrait photograph, “Memories (Me)” (2000), is a striking expression of identity linked to both his love of and disenchantment with his home country.

In the image, the artist’s left hand rests against a red background. The pinky finger is missing, and in the palm of the hand is a passport-sized black-and-white photograph of a smiling little boy: Sheng in his childhood. In the aftermath of the Tiananmen Square massacre, the artist decided to leave his country. But in a final act before his departure from Beijing, he cut off his finger and buried it in a pot in the city. Over the years he has given different reasons for doing so: in some tellings it was an act of despair; in others it came from a desire to leave a part of himself behind in the place he was leaving. 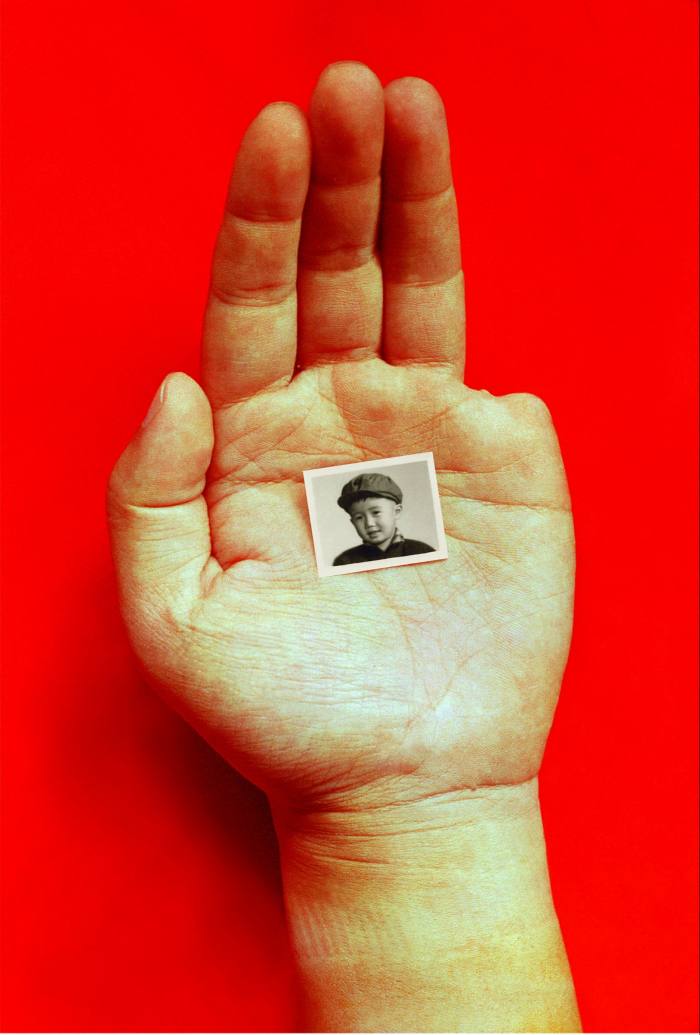 In this self-portrait and on his very body, Sheng offers a visceral reminder to himself, and to anyone who sees him, that his identity and sense of self is irrevocably connected to his relationship with his country and to what his people have endured.

It makes me reflectively curious about the ways we visually acknowledge and reveal ourselves as citizens of a particular place. What would our own self-portraits look like if they were tasked to portray both our joy and our despair about our respective countries and governments? How have we been personally affected in our lifetimes by the actions of our leaders, and how much does that play into a sense of how we see or understand ourselves in the world?

Japanese artist Yayoi Kusama works across media and disciplines, be it painting or sculpture, fiction or poetry. She is probably best known for her Infinity Mirror rooms — one of which is now on display at Tate Modern — and her pumpkin sculpture installations, exhibits that have provided the backdrop to countless selfies.

But Kusama has also created a series of self-portraits depicting painted images that highlight her repetitive patterns of polka dots. Rather than offering a physical likeness, they seem to combine aspects of her identity that are not externally visible, such as her mental and emotional health and the healing role that art has played in her life.

As a child, Kusama experienced hallucinations of patterns multiplying across all the surfaces surrounding her, including her body. She felt she was being obliterated. She says that making art saved her life, as she began to incorporate these patterns and dots into her work, and she transforms some of the symbols of her hallucinations, the dots, to represent the powerful energy of the sun and moon, opening a door of infinite possibility.

In her work “Self Portrait (TWAY)” (2010), there is no way to discern Kusama’s age and she is recognisable only thanks to her customary red lipstick and vibrantly coloured purple hair — emblematic of her penchant for bright bob wigs — with a fringe at the front. The background as well as her skin and clothing is completely covered by polka dots and a triangular pattern in purple, green-blue, cranberry and mustard.

The repetitive patterns identify her to the viewer, reminding us of her identity as an artist who struggles with mental distress and who has found comfort in her creative practice in these repetitive forms. It makes me consider anew the repetitive elements of our own lives, how patterns, habits and rituals become self-identifying aspects of our existence. And, in a way, keep us sane and help us survive and make sense of our own disordered lives. But there are also patterns and habits in our lives that destabilise our wellbeing.

After all we’ve been through, there is a certain playful sweetness to seeing again images of people delighting in their bodies and in the pleasures of the world. But, as we continue to navigate our re-entry into life, the self-portraits of these artists remind me of something important. Despite our tendency to want to present images that suggest the most desirable, carefree or admirable version of ourselves, there also exists a different opportunity, one that could continue to connect us to one another in compassionate ways of which we might have experienced a little bit during the pandemic. That seemed to be a time when there was an ineffable sense of solidarity among large swaths of humanity.

In our ability to create and take self-portraits that can quickly reach masses of viewers, we have an opportunity to consider how our self-identities intersect with our environment, our countries, our fellow citizens or residents, our collective histories, and our larger sense of wellbeing.

What we choose to include in our literal or metaphorical frames, be they glimpses of beauty, symbols of healing, snapshots of nurturing our environment or our community, can all speak to newly reflective narratives we are forming. Narratives that show how we are learning to see ourselves anew, in relation to the people we’ve been inspired to become, and the selves we’re learning to live with after having come through what we have.