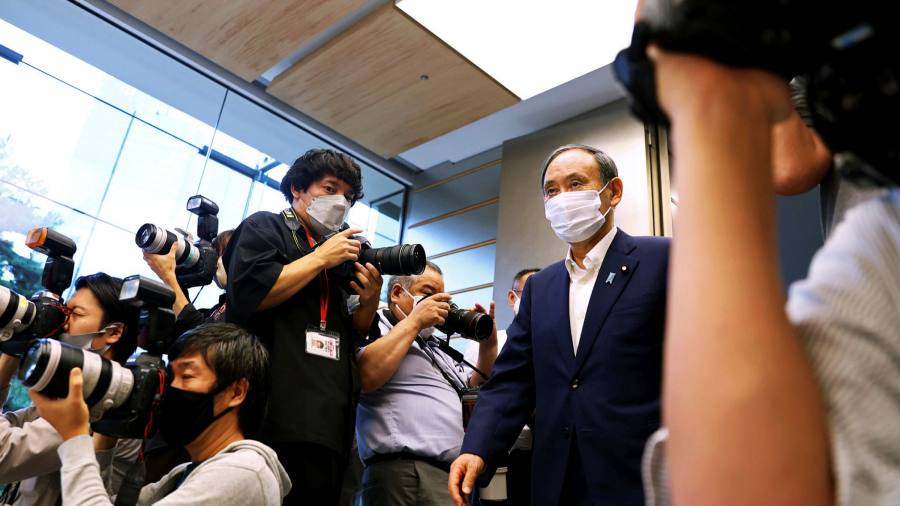 Sign up to myFT Daily Digest to be the first to know about Japan news.

The resignation of careworn, charisma-starved prime minister Yoshihide Suga on Friday parks Japan in a familiar spot. The top job has now changed hands 11 times in the past two decades and the newly-opened leadership race within the ruling Liberal Democratic party (LDP) comes with the standard risk that its choice — good or bad (but almost certainly male and advanced in years) — could unravel a year or so from now. The new leader’s chances of avoiding that humiliation, and of guiding Japan into a more assuredly post-Abenomics era, will depend on how they approach a formidable range of challenges. Here, in numerical terms, are six of them.

This is the proportion of Japanese adults who have received two vaccine doses — a rate that puts the world’s third-biggest economy somewhat behind the US (52.6 per cent) and a little in front of El Salvador (44.6 per cent). Although Japan’s vaccine programme has accelerated sharply to around 1m doses a day, its belated start and initially confusing administration were central to Suga’s downfall. While Japan’s death toll from the pandemic remains comparatively low, Suga never convinced voters that everything was under control. He should have known that this was precisely the kind of reassurance and paternalism a country like Japan, with the world’s fastest-ageing population, expects. His successor must rebuild trust with a public now politely but unambiguously at the end of its tether.

This is the estimated (and still rising) number of battle force ships in the navy of the People’s Republic of China, a figure that makes it the world’s largest seaborne military force and whose growing threat to regional security was identified under Suga as Japan’s highest defence priority. The implications of this swelling armada, along with China’s ever greater cyberwarfare capabilities, will place unremitting pressure on the diplomatic and domestic political finesse of a new Japanese leader as the country’s vulnerabilities grow ever more plain.

The number of medals won by Japan at the spectator-free Tokyo Olympics, 27 of them gold — a record total on which the country continues to build impressively at the Paralympics. Despite all that sporting success, Suga is leaving in part because, as a man never pictured cracking a smile at any of it, he could not convert that triumph into political fortune. He was grumpy, the nation was grumpy and the next Japanese prime minister must live with the fact that bread and circuses don’t work the way they did pre-Covid. Suga’s successor will also not be let off the question of why the LDP decided to risk the nation’s health for an estimated $25bn event whose brief glories are already faded.

This is the number of strident responses reported by the Cabinet Secretariat task force when Japanese bureaucrats were asked to justify the continued dependence on fax machines in government. Despite his brief reign, Suga pushed with the zeal of a Silicon Valley unicorn for the creation of Japan’s first Digital Agency, an arm of government mandated to disrupt the practices of yesteryear with bold 21st-century tech like email. The ardent defence of the faxes, however legitimately argued, gives a hint of how much political capital will be required to maintain any momentum on this. The agency began life on September 1, operating for just two days before its chief architect stepped down.

This is the proportion of companies in the Nikkei 225 index that now have at least one activist shareholder on their register, which is fast approaching the levels of the US S&P 500. For Japan to hit this ratio would have looked wholly implausible just a few years ago. But the empowerment of shareholders against the intransigence of corporate Japan is a legacy of Suga’s persistence in arming investors with Japan’s first stewardship and corporate governance codes in 2015. Suga departs with the Topix index at a 30-year high and with investors both foreign and domestic minutely attuned to whether a successor will support or derail the extraordinary market changes of the past few years.

Or more accurately the pledge of “net zero” carbon emissions by 2050. This was perhaps the biggest surprise that Suga sprung while in charge. It is undoubtedly the one that will have the longest-term reverberations beyond his departure, even if those tremors come in the form of embittered, compromise-strewn clashes between the next PM and the vested interests of corporate Japan. Suga’s apparent enthusiasm for the cause saw him target a drop in emissions by 2030 of 46 per cent relative to 2013 levels. It was always wildly ambitious, but calculatedly so: a successor cannot be seen to quickly abandon that goal, particularly as the world prepares for the UN climate change conference in November.