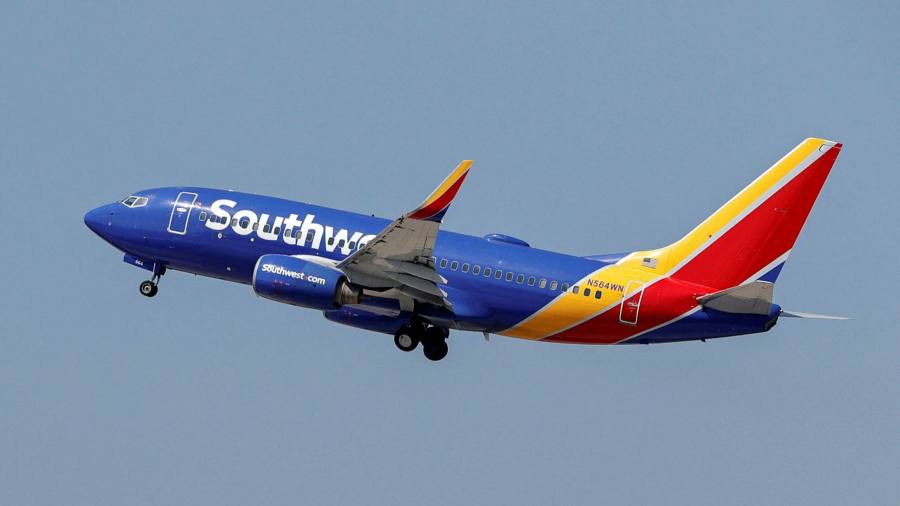 Sign up to myFT Daily Digest to be the first to know about Southwest Airlines Co news.

Just three weeks ago, Southwest Airlines’ bosses announced that the low-cost carrier had “not seen any impact from the Delta variant”. But as every nervous plane passenger knows, smooth ascents can be interrupted. On Wednesday, Southwest switched its position. Even as July proved profitable, it noted the effects of the Delta strain were chilling travel plans in August and September. The company says the third quarter will not be profitable without the benefits of the government’s payroll support programmes.

Shares of travel companies have soared since hope of vaccines appeared late in 2020. However, the euphoria had already begun to ease before pandemic worries reappeared. The S&P 500 continued to steadily rise but shares of Southwest were down a fifth from their 2021 peak. Airlines in particular have high leverage, both operating and financial. The run-up in their respective stock prices required a perfect upward recovery that in retrospect was unlikely.

In the second quarter of the year Southwest’s monthly operating revenue deficits relative to the 2019 pre-pandemic baseline level improved from 42 per cent to 21 per cent. At the same time, its load factors edged up to 85 per cent. In July it said that the August revenue deficit would drift to just between 12 and 17 per cent. Now, however, the August estimate has been revised downward to 15 to 20 per cent, with no improvement expected in September.

Southwest did say that travel demand for the all-important US Labor Day holiday weekend remained “healthy”. But both the airline and its rivals were relying on heavy leisure travel all the way through the summer and autumn to make up for muted business travel. From a liquidity standpoint, Southwest is in fine shape with $17bn in cash. But with fuel prices elevated and new planes now not expected to be full, equity holders should expect to feel the brunt of the disappointment. They should think carefully before listening to Southwest’s optimistic pronouncements in future.

Our popular newsletter for premium subscribers is published twice-weekly. On Wednesday we analyse a hot topic from a world financial centre. On Friday we dissect the week’s big themes. Please sign up here