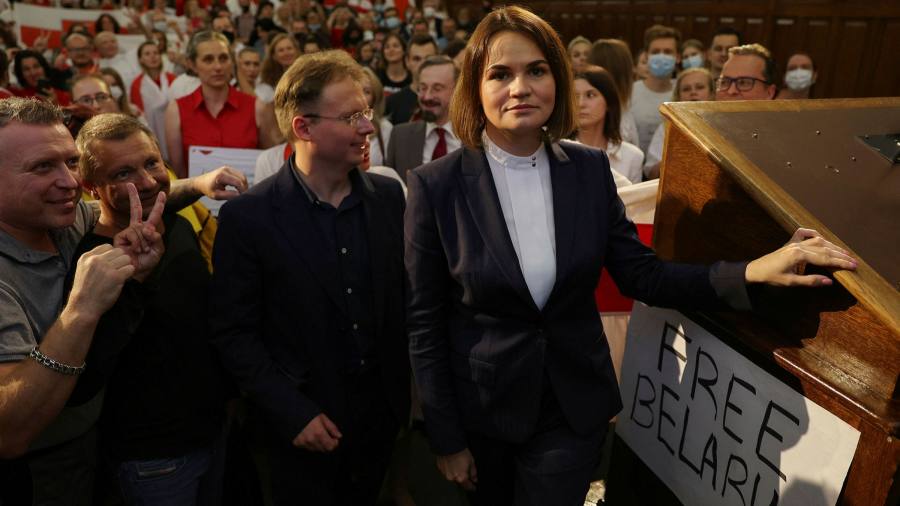 The writer is the leader of the democratic movement of Belarus

“I screamed, smothered by a black bag, and they laughed. They said: ‘Don’t scream. Your Tsikhanouskaya won’t hear you.’”

This is how Stsiapan Latypau, a political prisoner in Belarus, recalled his arrest in his final statement in a Minsk “court” last Thursday. His speech was dignified and eloquent, devoid of spite and hate, even as he spoke of beatings and torture.

I do hear you, Stsiapan. And I urge the democratic community of the world to hear you, too.

Stsiapan’s story illustrates the crisis my country is going through. Since the stolen presidential election of August 2020, more than 35,000 people have been detained in Belarus. Alexander Lukashenko’s regime has launched 4,691 politically motivated criminal cases. Viasna, a human rights centre, recognises 631 people as political prisoners and has received 4,644 allegations of torture. As many as 10 people have lost their lives.

This campaign of relentless repression is the regime’s response to a non-violent uprising that has swept Belarus since last August. On Monday we will celebrate the anniversary of the “Freedom March”, when more than 200,000 people in Minsk took to the streets in an entirely peaceful action to demand new, free elections and to protest against regime-inspired violence. Since then, protests have taken place almost every day all over Belarus.

Besides their repression of innocent citizens, the authorities in Belarus have become a security problem for the rest of Europe. In May, the regime’s agents hijacked a Ryanair plane en route from Athens to Vilnius to capture Roman Protasevich, a citizen-journalist who was on board.

Vitaly Shishov, a Belarusian community leader, was found hanged in a park in Kyiv, capital of Ukraine, two weeks ago. The regime is facilitating the passage of migrants from Iraq to Lithuania, Latvia and Poland. As a result, Lithuania and Latvia have declared a state of emergency. These events demonstrate that unless Belarusians are safe, no other European citizens are safe either.

In this situation, I urge the democratic community to stay true to our common values and to take action. As I have emphasised in my meetings with US president Joe Biden at the White House and with Boris Johnson, the British prime minister, in London, Belarus stands today on the frontline of a broader struggle between autocracy and democracy.

Democratic countries have a moral obligation to support us. Assistance programmes for civil society and independent media in Belarus are of crucial importance. We also welcome the sanctions announced by the British government, the EU and the Biden administration on the regime’s enterprises and its representatives that are funding and carrying out repressions. Sanctions deprive the regime of resources, destroy the corrupt schemes of its cronies and split the elites. However, for sanctions to be effective, it is vital to remove loopholes in them.

Lawlessness caused by the impunity of the regime is the main reason why the people of Belarus are experiencing such suffering. Sanctions are the most effective way to stop it. To the same end, the International Criminal Court should initiate proceedings on the crimes that the Belarusian dictatorship is committing. The UN could start this process by putting Belarus on the agendas of the General Assembly and Security Council.

The dictatorship is destined for collapse, even though the illegitimate ruler of Belarus, who has held the country in his grip since 1994, is trying to buy more time for himself. State propaganda has been promoting the idea of a referendum on constitutional reform as a way to “move on” from the crisis. However, no solution is possible without dismantling the dictatorial system. At the same time, an attempt to fake reform might be the trigger that causes a collapse.

We, the democratic movement of Belarus, will be prepared. We have laid the groundwork for a way out of the crisis through holding free elections under international observation. We propose an international high-level conference that can lead to negotiations. The Organization for Security and Co-operation in Europe is ready to be a platform for dialogue on new elections.

I have met with the heads of state of 31 countries, and I have made 22 working visits to make sure that Belarus will have friends to rely on during the transition to democracy. We have worked together with the European Commission in Brussels to develop a comprehensive plan of economic support for a future democratic Belarus.

We have drafted policies for the conduct of free and fair elections within 60 days. We are putting in place mechanisms for the release of political prisoners, for the rehabilitation of victims of regime repression and for the national reconciliation that will be essential after the democratic transition.

Belarus can and will be a success story of Europe. In 2020, we put our country on the map as a place defined by dignified, daring, peaceful people struggling for democracy. We have learnt that the path to freedom is long and difficult. But we are closer than ever to achieving it. We will not miss our chance.